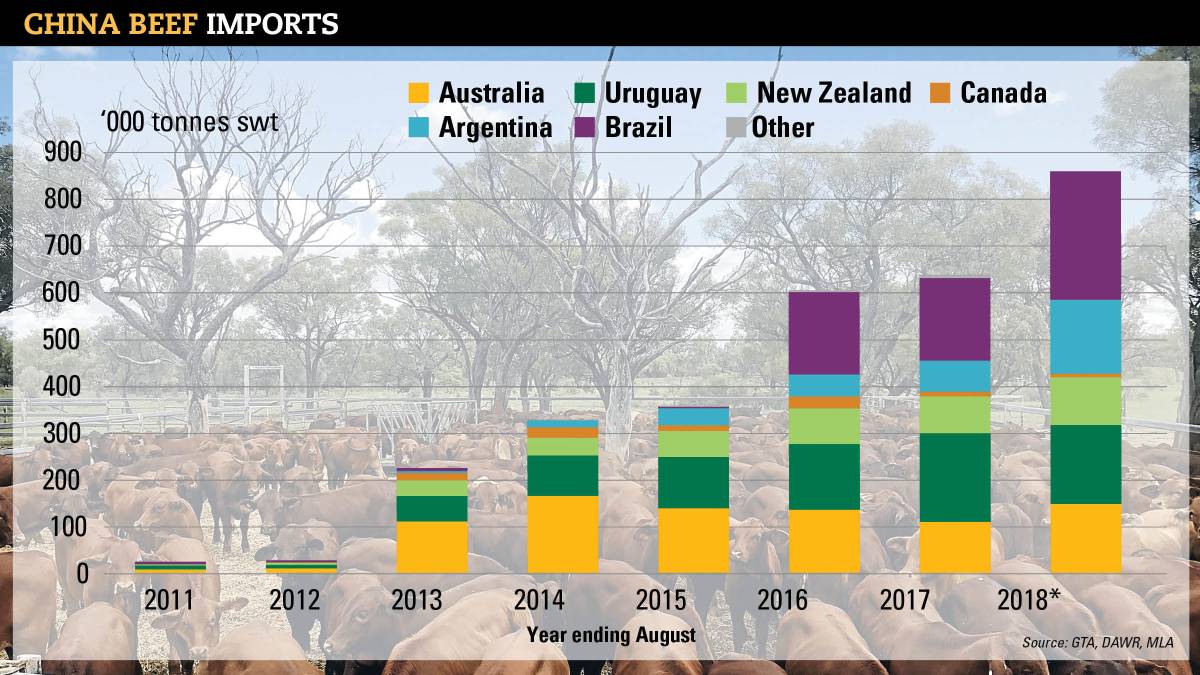 AS patchy rain continues to push the cattle market up, all eyes are on beef export demand which will determine the strength of finished cattle prices and how much heat is likely to be pumped into restocker competition.

This week’s rain has put the Eastern Young Cattle Indicator at 537 cents per kilogram carcase weight, close to 60c above what it was just three weeks ago.

Analysts now believe any follow-up, particularly if it is relatively widespread, will see demand for young cattle spike, with females treated like gold.

Mecardo cattle analyst Angus Brown said the supply of finished cattle would not improve with rain so stronger values could be expected to last until the end of the year and translate into support for young cattle.

Agents across the Eastern Seaboard are singing from the same songbook: Move quickly because the shrinking pool of cattle for sale is going to send prices skyward fast.

However, Meat and Livestock Australia managing director Richard Norton said market signals were suggesting it would still be profitable to restock in a normal season.

He backed that up with commentary on the solid performance of beef exports this year and the potential of international markets.

Speaking during a senate estimates hearing in Canberra last week, where he was questioned on whether the smaller Australian cattle herd was the ‘new norm’, Mr Norton said it may take three to four years to get back to typical numbers of between 28 and 29m head.

“Beef coming out of a drought situation is expensive so we can only sell our product at a premium into overseas markets,” he said.

“As I speak to customers around the world, the biggest concern is around supply of product, particularly through Asia, so the demand is there.”

Beef exports for 2018 are forecast to expand 9 per cent to 1.1m tonnes shipped weight.

Exports to Japan and Korea were up 7 and 15pc respectively and shipments to China surged 55pc year-on-year.

Even larger growth, however, was notched up in China by key competitors Brazil and Argentina.

MLA says China has “transformed from a minor buyer of beef to a global importing powerhouse second only to the US.”

Mr Norton said the world was changing from wanting frozen to chilled meat product, assisted by improvements in logistics, and that placed Australia in a strong position given our proximity to Asia.

“MLA only markets into three cities in China but that makes up around 100m people,” he said.

This is why so much industry focus is being directed towards lifting the number of plants accredited to supply chilled beef to China, from the current 12.

The strong performance of Australia’s boxed beef trade to overseas markets has some parts of society talking a natural transition away from live exports.

He used the example of Western Australia’s lamb market to make the point there would less jobs in Australia if the live export trade closed down.

The average price in cents per kilogram carcase weight for lamb on the Eastern Seaboard at the moment is $7.30. In WA, with no live-ex at play, it is $5.80.

“If live-ex starts buying sheep again that will increase, without a doubt,” Mr Norton said.

“That’s the dynamics of supply and demand, the reality of it at the moment.”

Without the live-ex market, farmers in WA wouldn’t breed sheep because the result would be a market controlled by very few processors, Mr Norton explained.

There is simply not the processing capacity in WA to slaughter the number of sheep sold off farm.

“Market forces will dominate what happens in the future but at this moment, it would have a dramatic impact on farmers in WA if the (live-ex) trade closed,” he said.