Patterson and Hutchison's Russell Patterson was very happy with their results for these very good quality, Violet Hills blood steers. Their 34 head sold to $1210 at Pakenham.

Call it the hobby farm factor, but demand for small lots of plain young cattle was strong

FEEDLOT COMPETITION ruled the rices of yearling steers and bullocks at Pakenham, Thursday.

Teys-Cargill, JBS, and Hopkins River all competed for a range of weights, and several pens of Hereford steers weighing 340-400kgs were purchased to graze crops, potentially to grain feed at a later stage.

South Gippsland’s D Guest, Woodleigh, sold 32 Angus steers from $1130-$1180 with all being purchased for grain feeding for future export markets.

All of these prices were very similar to Pakenham’s previous sale two weeks ago. However, the extra competition for the Hereford steers did lift prices by $50 per head. 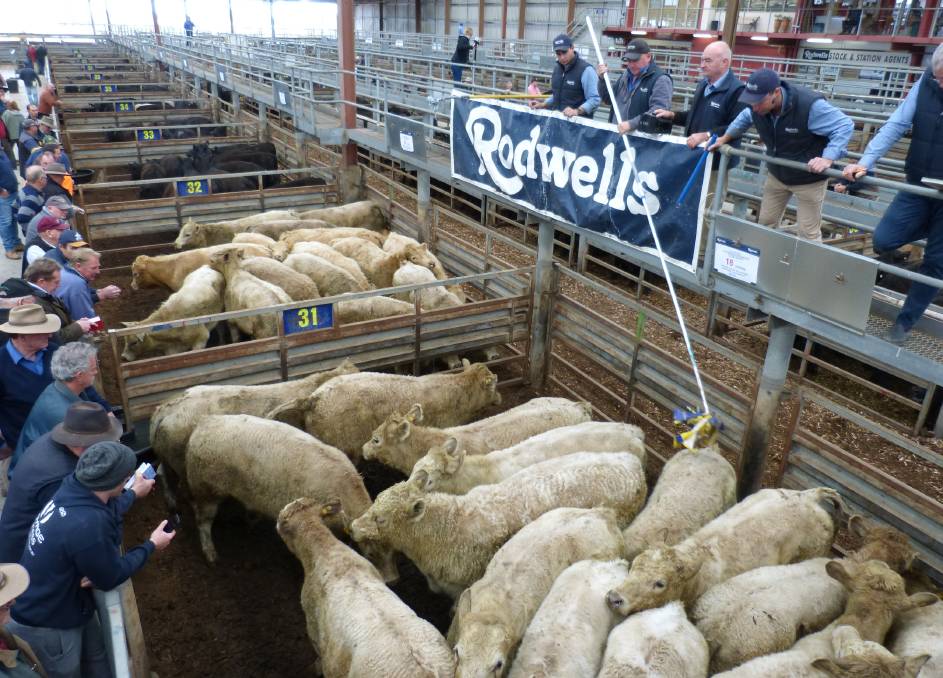 Many cattle with New South Wales names were noted here at Pakenham, and one of the better quality consignments came from P Shelly at Cooma. His 29 Hereford steers sold from $970 to $1200 with all purchased to be crop fed.

Generally, increased demand, mainly for the lighter weight steers and heifers, lifted prices up to $40 for steers, but as much as $80 for heifers.

It was hard to estimate how many light, and very plain cattle were penned, but many came from NSW, some from as far as Orange.

However, there are plenty of dry areas in Victoria, and many of these, some from north of Melbourne, some local, and numerous vendors from further east all supplied lightweight younger cattle.

P Evans, Pakenham, sold 140 Angus, Hereford and Angus-Hereford steers from $660 to $955, which was dearer than two weeks ago.

A Abrahams, Kilcunda, sold 21 Angus steers for $580, which by Banquet bulls, and to justify how some heifers improved much more than steers, The Abrahams’ heifers made $580 per head.

I and H Hill from Mincha sold Angus-Wagyu steers for $500 and their heifers made $420 with all purchased for future grain feeding.

A few sales of yearling heifers, most being in good to prime condition, sold to strong feedlot and producer competition.

Six heavier yearling heifers sold from $1120 to $1280, but competition for some Angus heifers was quite strong with processor driven feedlots paying $910-$940.

From north of Melbourne R and S Matthews sold Angus heifers for $940 and F and M Trovetello’s heifers sold for $920.

However, there were plenty of younger and plain heifers penned from a very broad area of Victoria and NSW. Many of these sold between $210 and $610 per head.

Cows and calves, and PTIC females sold to fair competition, but the very plain types made little money.

A pen of Hereford-Friesian heifers, 2.5 years, PTIC to a stud Limousin bulls sold for a very good price of $1400.