A LARGE gallery of buyers converged on Merridale Angus stud’s Tennyson property on Friday, to bid on an even lineup of bulls, cows, and cows and calves.

A LARGE gallery of buyers converged on Merridale Angus stud’s Tennyson property on Friday, to bid on an even lineup of bulls, cows, and cows and calves. 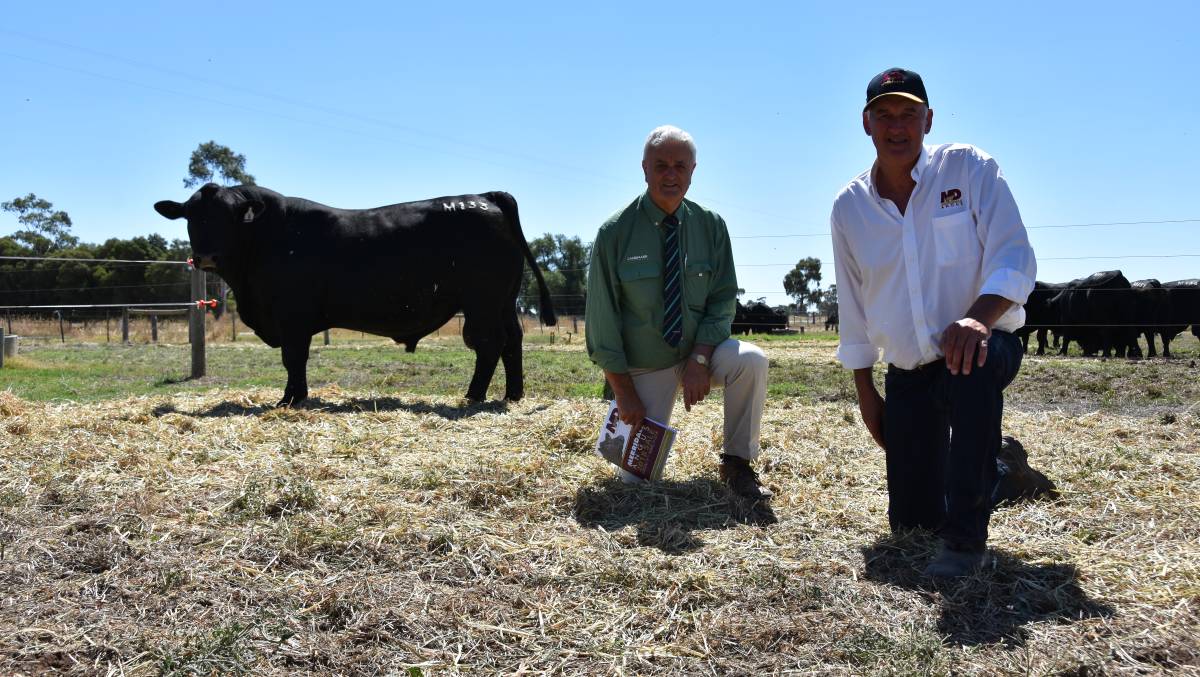 Mr Hayward and Ms Smith had seen photos and videos of the bull online, and were drawn in by its visual appeal.

“We were really impressed by his structural correctness when we first saw the photos and videos online, and also by the way he moved,” Mr Hayward said.

“This is the first time we’ve bought from the stud, but I’ve seen [stud principal Peter Collins] judge in beef competitions over the years, and have been really impressed by the cattle that he picks.”

K5X stud currently runs about 130 Angus cows, and the bull will be joined to cows, and potentially heifers, in October.

“We’ve used a bull that’s bred a lot of big cows, and we want to bring them back a bit, so we’re hoping this bull will be able to do that, as well as add some structural soundness to the herd,” he said.

The cow is the full embryo transfer sister of the top-priced bull that SBC Farms purchased last year, whose genetics have so far been doing well in the herd.

“She is probably the best female that’s ever been offered by Merridale,” Mr Landy said, which was the same thing said by Elders auctioneer Ross Milne during the auction.

SBC Farms has only been established for 18 months, and Mr Landy said these two Merridale cows will be a part of the foundation cow herd.

“We’ve bought cows in numbers already, but now we wanted to buy for quality,” he said.

“It’s important to invest in quality; if you get your females right, the rest will follow.”

Merridale Angus stud principal Peter Collins said there were a lot of happy buyers at his on-property bull sale.

Merridale stud principal Peter Collins said he was “very happy, and relieved” by the result of the sale, which was credit to the hard work of his family.

“We’re only a small stud, so we don’t offer big numbers, but we’d prefer to offer quality than numbers,” Mr Collins said.

“We want to make every bull a winner.”

He said he was not surprised that Lot 5 was a standout to the buying gallery.

“He was our picture bull, and it was great to send him to an interstate stud,” he said.

“Two years ago we sent four bulls to another stud in Queensland, and they did well there, so our bulls must do well in that sort of country.”