WEST Wimmera Dohne stud Koonik recorded a solid performance, with a mix of repeat and new clients competing for a well-turned out line of rams, with prices ri...

WEST Wimmera Dohne stud Koonik recorded a solid performance, with a mix of repeat and new clients competing for a well-turned out line of rams, with prices rising to $4250 on two occasions. 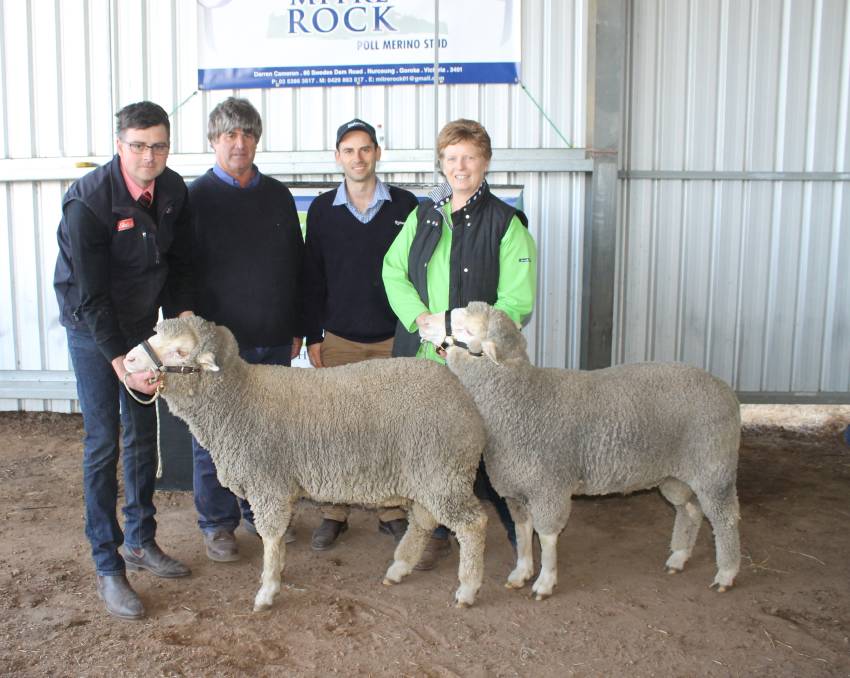 Stud principal Fiona Cameron said she was pleased with the result, which saw 64 of 80 Dohne rams sold, averaging $1909, put under the hammer by Andrew Sloan, Landmark and Nick Gray, Elders.

Overall values were virtually identical to last year, with the Dohnes averaging slightly higher and the Merinos slightly lower.

There were 29 buyers, spread mainly across western Victoria and eastern South Australia.

Mrs Cameron said of these clients, 18 were repeat buyers while 11 were first-timers.

There were two rams which made the equal top price of $4250.

One, lot 7, which had a whopping Dohne Index value 176.7, was purchased by the Hobbs family, Sunnyside Partnership, Clear Lake in the southern Wimmera.

The other top price ram, lot 33, with a Dohne Index of 173.4, was purchased by the Eagle family’s Glenora Pastoral, Bungalally, south of Horsham.

In the Merino component, Brad Blackwood, Nhill, bought the top ram at $1500.

Volume buyers included repeat clients Geelong Lime, with the Inverleigh based business snapping up seven rams to $3000, with an average of $1914.

Other consignments of rams went to Elmhurst in the Pyrenees, Callawadda in the eastern Wimmera, Kerang and across the border to Naracoorte and Bordertown, SA.

There was strong competition among buyers, especially among the first 40 and last 15 lots, with confidence bolstered by the strong sheep meat and wool markets on offer at present, combined with near-ideal seasonal conditions.

Mrs Cameron said a notable sale was lot 5, which was purchased to be used as a stud ram by the Staude family, KD Dohnes, at Bordertown.

She said she was pleased with the sale.

“It was a good result, it was especially pleasing to see the young rams, the spring drop rams from last year, sell so well.”

Mrs Cameron paid special tribute to visiting Uruguayan couple Lucia Pérez and Manuel Verrastro, agronomists in their home country who worked at Koonik as part of a working holiday, specialising in agricultural work, around Australia.

“They had the rams in great condition leading up to the sale,” she said.

Prior to working with the Camerons, who they met at the Bendigo Sheep and Wool Show, Ms Pérez said the couple had worked on a sheep property at Ararat.