Daniel and Anne Marie Barrow were thrilled by the strength of their inaugural on-property sale at Merlewood Angus, Mirboo North.

DANIEL and Anne Marie Barrow were thrilled by the strength of their inaugural on-property sale at Merlewood Angus, Mirboo North.

Lot 3, Merlewood Mentor L51 (AI) reached the sale high. The 19-month-old bull was the heaviest in the sale draft at 744 kilograms. He was a by US sire Connealy Mentor 7374 and out of a Merlewood Royal-Line cow.

Robert Chalmers, who purchased the young sire on behalf of DM&MF Chalmers, Leongatha South, said he liked its size and estimated breeding values (EBVs) including its eye muscle area figure of +8.3 square centimetres (which is in the top five per cent of the 2015-drop Angus and Angus infused animals) and birth weight of +4.5kg (which is slightly above the breed average).

Mr Chalmers said they planned to put Merlewood Mentor L51 out with females in about four to five weeks. They run 300 Angus-Hereford cross cows.

It was the first time the Chalmers family had purchased from Merlewood, and Mrs Barrow said more than half of the people that bid were new clients. 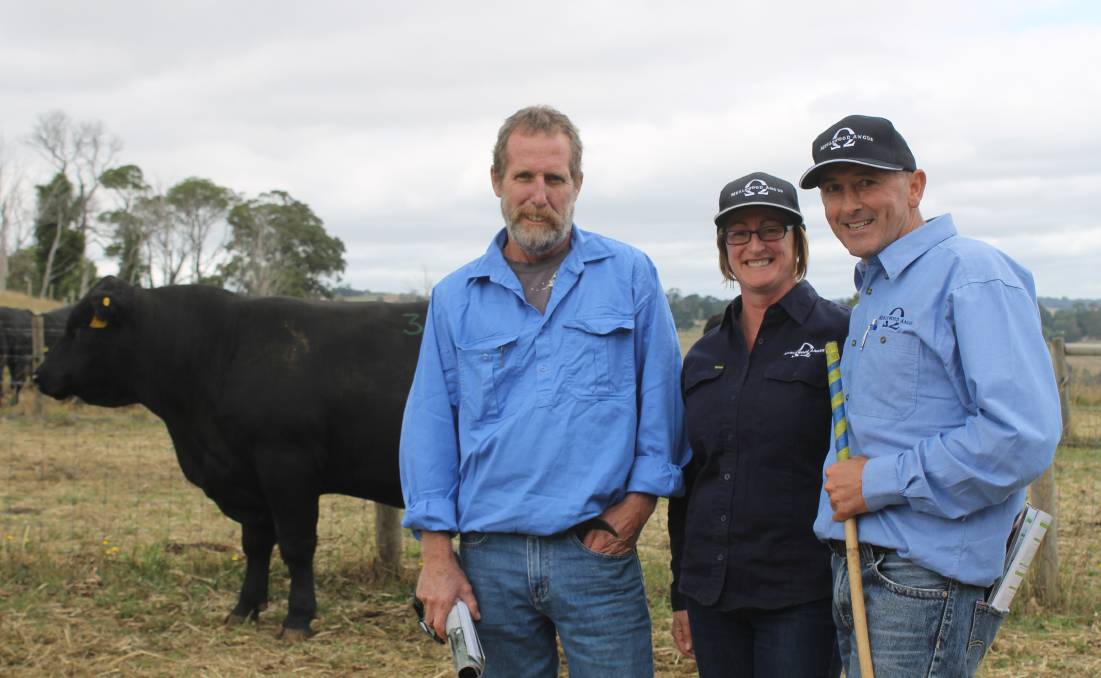 It is only their second year running beef cattle, after coming across from Western Australia, and they said they bought the bulls – both by Irelands Heirloom H343 (AI)(ET) – to improve their herd.

Irelands Heirloom H343 (AI)(ET) sired the most bulls in the Merlewood sale draft, at eight (including the two purchased by the Sederlans). Its EBVs include +131kg for 600-day weight, and its eight sons averaged $5000. Another influential sire was Carabar Docklands, whose three sons averaged $6833.

Brendan Flynn, Ensay, was the other buyer to secure two bulls. He paid $5500 and $4000 respectively.

There were 54 registered buyers and all of those who successfully secured bulls came from the greater Gippsland region. Two bids were placed on two lots through online service LiveBidding. They had 11 people register to bid online for the Merlewood sale, and people watched it from Queensland, NSW and Victoria.

​Mrs Barrow said she and husband Daniel were “over the moon” about the large number of potential buyers and onlookers that attended the sale, the clearance and the average price.

“We’re looking forward to going onwards and upwards,” she said,

“We’re really pleased to be bringing quality genetics to the heart of Gippsland; and these bulls were born and bred and have proven to perform in Gippsland.

“We got fantastic feedback from successful buyers and those who missed out, who said they’d be back again next year.”

In opening the sale, auctioneer Ross Milne, Elders stud stock, congratulated the Barrow family on the quality of the bulls they offered and said it was evident that a lot of passion, time and effort had gone into breeding them.

He said their quiet temperament stood out: “I’ve done probably 35 sales in the past few weeks, and I don’t think I’ve seen quieter bulls.”

Elders and Landmark worked together to conduct the sale, with Elders calling the auction and Landmark being the settling agent.