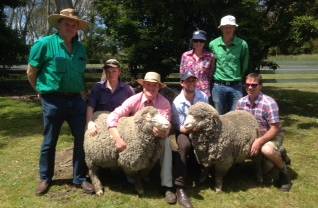 KERRSVILLE Merino and Poll Merino stud achieved a stronger clearance thanks to the support of one new buyer and the return of buyers who did not buy rams last year.

KERRSVILLE Merino and Poll Merino stud, Coleraine, achieved a stronger clearance thanks to the support of one new buyer and the return of buyers who did not buy rams last year.

Leading buyers were long-time supporters the Hill family, Macarthur, who bought seven rams, including one at the equal top price of $1600.

This was for Lot 4, a replacement ram from Kerrsville’s flock reserve team.  The two year-old Poll Merino ram was by CP20484 and had Australian Sheep Breeding Values (ASBVs) of greasy fleece weight (GFWT) 121 per cent, -0.9 micron for fibre diameter and a 6pc index of 124. He was ranked fifth out of 249 ram weaners.

The second ram to reach the top-price was lot 14, another two year-old Poll ram from the GL Family.

It was purchased by other return buyers CJ & KA Baulch, who bought a total of four rams.

Other volume buyers included Ballintubber Partnership, Bulart, who secured five rams to a top of $1300.

Also with five rams was Nudora Partnership, Brit Brit, that paid $800 for each.

The second top price was paid by new clients, the Brinkman family, for a Jacko son at $1500.