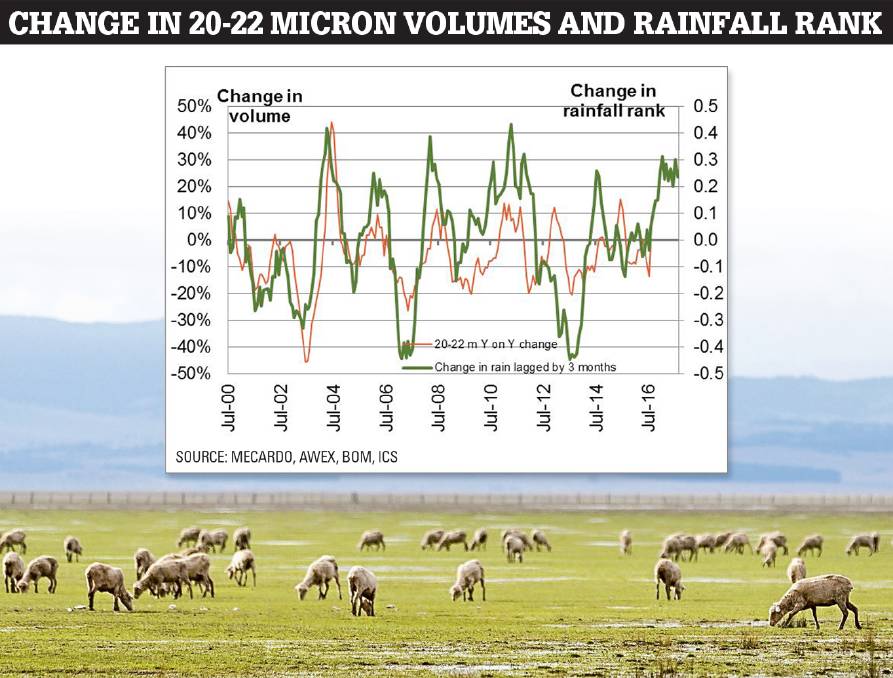 THE recent rainfall will lead to a change in the micron profile of the Australian wool clip next spring, while boosting production volume and lamb marking rates.

THE recent rainfall will lead to a change in the micron profile of the Australian wool clip next spring, while boosting production volume and lamb marking rates.

Independent Commodity Services, wool market analyst Andrew Woods, Wagga Wagga, NSW, forecasts the eastern states wool clip to be on average half a micron broader at the end of this financial year.

As part of a Mecardo analysis, Mr Woods said the wool market would experience increased volumes of 20-22 micron wool as this season progresses.

“The wool market has spent most of the past five years with lower year on year volumes of broader merino wool,” he said.

“In the coming year the market will have to deal with increased volumes of these categories, which will allow the micron premiums and discounts to widen from their depressed levels.

“It may also take some of the underlying strength out of the greasy wool market.”

He said a significant rise in rainfall, with most of the state experience more than 100 millimeters in the past fortnight, was a proxy for a improvement in seasonal conditions which would lead to a change in the micron profile of the Australian wool clip.  As a result, finer microns were expected to decrease in production volumes, while the broader microns would increase.

“The production for 20-22 micron wool is very likely to be increase year on year as this season progresses,” he said.

“By the middle of next year, we can expect 20-22 micron category to be up 30pc in production, while 15-17 micron will be down 30-40pc reflecting an increase in fine wool volumes in dry weather and a decrease in wet weather.”

The last three years have had rainfall in the 40 percentile of the rolling 12 month rainfall rank, which Mr Woods said reflected consecutive dry years with below average rainfall.

He said seasonal conditions were looking promising in mid-2014 but the spring proved to be dry, so the response in decreased fine wool production was cut short.

“Such seasonal production response is likely to be boosted by grower reaction to the extended period of low fine wool premiums of recent years,” he said.​