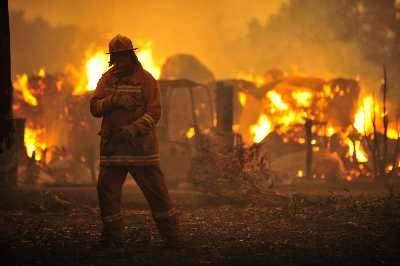 A bushfire rages in the Bunyip State Park on Black Saturday.

THE state government faces a brutal week at the Bushfires Royal Commission, as the lawyers assisting the commission accuse it of ''substantial policy failure'' that placed ''at least some of those who died at great risk''.

THE state government faces a brutal week at the Bushfires Royal Commission, as the lawyers assisting the commission accuse it of ''substantial policy failure'' that placed ''at least some of those who died at great risk''.

In a devastating critique of the state's management of bushfires over many years, the submissions to be put to commission chairman Bernard Teague, and seen by The Sunday Age, say the government and its fire agencies have still ''failed to grasp'' that the ''stay or go'' policy has been discredited, preferring to ''tinker'' with it during the recent fire season.

''There has been substantial policy failure … the existing policy should be abandoned,'' the final draft submission says.

''It is known that the policy itself … placed at least some of those who died at great risk.''

The commission's lawyers, led by Jack Rush, QC, call for the abandonment of the policy because it contributed to the deaths of some of the 173 people killed on Black Saturday.

They call for voluntary evacuation to be introduced as the primary response and are scathing about the slow pace of identifying and building refuges for those who cannot leave.

''It is extraordinary that as late as April 2010, the state is still in the position of running workshops directed at preparing a discussion paper about refuges … the progress to date has been glacial and it is submitted that the delay is inexcusable,'' counsel assisting will say.

They will advise the commissioners to urge the government to produce a new policy on refuges by September 30 at the latest, and have shelters in all at-risk communities by the next fire season.

With an election in November, the state government has been keen to limit the political damage from the royal commission, but the submissions point to failures of government policy going back at least a decade, particularly by persisting with ''stay or go'' despite substantial evidence, commissioned by the Country Fire Authority, that it did not work.

The government is also accused of ''the worst traditions of management-speak'' by using timid words such as ''relocation'' instead of the stronger ''evacuation'', and for creating terms such as ''Neighbourhood Safer Places - Places of Last Resort'', which are better called ''shelters''.

Another submission, to be presented this week, condemns the entire upper hierarchy of the fire and police services, including former police commissioner Christine Nixon and retiring Country Fire Authority chief Russell Rees, who they say ''presented as managers, not leaders''.

''The evidence leaves a sense of bewilderment … a lamentable lack of responsibility and leadership from the most senior personnel involved in the response to the unfolding disaster,'' the submission says.

A third submission recommends a new structure for fire agencies, with the CFA chief officer fully in charge on a bushfire day, and a new supervisory board trying to iron out the conflicts between agencies.

Commission chairman Teague will consider the submissions - and the response to them by lawyers acting for the government and other parties - and deliver his final report to the government on July 31.

The government's lawyer, Allan Myers, QC, is expected to reject some submissions, particularly in relation to how leaders responded on Black Saturday.

The submission dealing with ''stay or go'' - the policy officially known as ''prepare, stay and defend or leave early'' - is the most critical. The commission's lawyers say it should be replaced by a new policy called the ''Bushfire Safety Policy''.

Under this policy, evacuation from the fire zone should become ''the primary protective action to be considered for a community threatened by fire''. Fire agencies, in consultation with local communities, should make detailed evacuation plans for each town, with contingency plans for fires coming from different directions.

On the day of the fire, the incident controller would be responsible for ordering a voluntary evacuation, because he or she has access to the best local information. Only when evacuation is not safe should people seek shelter, either in their home or in a designated refuge or shelter. Every vulnerable town should have at least one shelter by the next fire season.

The counsel assisting will ask royal commissioners Teague, Susan Pascoe and Ron McLeod to find that leaving late from a fire zone is not nearly as dangerous as fire agencies continue to believe. Black Saturday, they say, has ''turned that … on its head''.

The submissions make stinging criticisms of the policy that stood in the lead-up to Black Saturday. In spite of faults that had been pointed out in the CFA's own studies in 1999 and 2004, ''stay or go'' was so dominant that it ''forbade CFA personnel from advising or providing residents with direction''.

The policy meant that all but one of the state's fire refuges was decommissioned, because they ''sat somehow outside the … policy'', and because ''policy consistency'' was more important than what worked in practice.

The policy glossed over the risks and difficulty of defending a home against fire, it left hard judgments up to individuals without any help from authorities, and it left people without second options.

It even ''promoted the extraordinary position'' that warnings of approaching fire were only for those who were well prepared - so they failed to inform people about how to escape.

''Stay or go'' had convinced many people, wrongly, that they were capable of defending their properties, the lawyers will say. The people of Pine Ridge Road in Kinglake, for example, would have been better off leaving, ''even when the fire had reached the street and houses were alight''.

The lawyers will argue that the government's faith in the policy is based on the ''badly misplaced'' idea that people can be ''re-educated'' to change their behaviour. But most people will always ''wait and see'' if a fire is threatening them before they make a decision to act.

As a result of these failings, ''when fires commenced to burn across the landscape on 7 February, the community was, because of the stay or go policy, pre-disposed to suffer major losses''.

However, the counsel will say that blindness to these faults is alive and well, despite the commission's interim report which called for fundamental change. Emergency Services Commissioner Bruce Esplin told the commission last month that the real problem was in the ''selling'' of the message.

The lawyers will say this approach is ''disquieting'' and that it is ''regrettable'' that ''a plain and open acknowledgement of the failures of the 'stay or go' policy was … not forthcoming''.