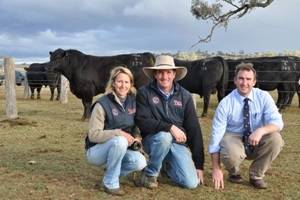 RECORDS were made to be broken and last week's Texas Angus sale at Warialda, NSW, did just that for the Mayne family.

RECORDS were made to be broken and last week's Texas Angus sale at Warialda, NSW, did just that for the Mayne family.

Up there as one of the best sales all year, the sale eclipsed all of the stud's previous records when its full draft of 107 bulls sold to a top of $30,000 and a staggering average of $7560.

After a strong bidding duel, the 858-kilogram son of Mohnen Dynamite 1356, from Texas Undine Z183 (AI), was eventually knocked down to Tasmanian Angus breeders, the Wallace family, Woodbourn stud.

Dynamite E139 ticked all the boxes on paper, being in the top one per cent of the breed for 600-day weight with a figure of +122; the top five per cent for 200- and 400-day weights, scrotal size, carcase weight, heavy grass fed index and the short fed index, and the top 15pc for gestation length and eye muscle area.

The bull will be used in the 180 head Woodbourn Angus stud herd.

By Mohnen Dynamite and from Texas Undine X221 (AI) - the granddam of the top-priced bull - the 936kg bull was in the top one per cent for 600-day weight; the top 10pc for 200- and 400-day weights, gestation length, rump fat and the terminal index, and the top 15pc for scrotal size, carcase weight and rib fat.

Texas Dynamite E371 (AI)(ET), from the same flush as the second-top bull, sold for $17,500 to John and Bev Cochrane, Cochrane Angus, Jimboomba, Qld.

This 990kg bull, which had been used over Texas stud heifers, ticked all the right boxes too, being in the top one per cent for 400- and 600-day weight and gestation length; the top five per cent for 200-day weight, carcase weight and terminal index, and the top 10pc for scrotal size, heavy grassfed and short fed indexes.

Another full flush brother sold for $14,000 to Lindsay and Fiona Barlow, Barlow Cattle Company, Araluen, Dingo, Qld, who also took one other bull at $9000.

Topping the yearlings was a son of new sire, West Australian-bred Coonamble Z3.

"We didn't imagine we'd get that big a result," he said.

He said they were particularly happy to see that 75 per cent of buyers were return clients, and that buyers were chasing growth, softness and early weight gain.

Over 60pc of all sale bulls crossed the border to Queensland.