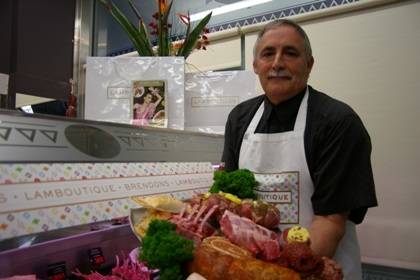 BUTCHER shops across the country have been turned into high-end fashion stores for Meat & Livestock Australia’s (MLA) spring lamb campaign.

BUTCHER shops across the country have been turned into high-end fashion stores for Meat & Livestock Australia’s (MLA) spring lamb campaign.

Brendon Watts’ butcher shop, Brendon’s Quality Meats, is among selected stores with the Louis Vuitton-inspired finish, as part of the Lamboutique campaign launched in time for the spring racing season.

The Doncaster butcher is an old-hand when it comes to red meat marketing and is strong advocate of MLA promotions.

“I love the creative side of what it brings to the industry,” Mr Watts said.

“It’s an opportunity to create interest. I’m a traditional butcher but I do everything that is contemporary.”

The wall of Mr Watt’s shop is covered in 42 years of memories, including photos with Sam Kekovich during the launch of the Australia Day campaign.

Mr Watts says dedicated prime lamb producers have made a big difference to the product he is able to provide to consumers.

“There is a significant difference now with dedicated breeders – the product is far more consistent than we’ve ever seen,” he said.

“Southdowns were built like a tank and were fatty as anything. Now, with dedicated breeders and science, we’ve come a long way forward.”

And it is the consistency and traceability of the product that Mr Watts says is the key to creating interest in red meat.

“I have to supply a very good product that meets my clients’ expectations,” he said.

“It’s not about changing – you don’t want to wait until the last option to change.

“Perception is everything. I can’t afford to compete with Coles and Woolworths – they’re getting good at what they do and it has to have an impact.”

He says price pointing is important in today’s market as consumers become more conscious about what they spend.

“But butchers make less of lamb backstraps than when we sold them for $7.90/kg.”

“We can’t afford for it to be too expensive other it will have a damaging affect. It’s about the while package.”

But for Mr Watts it’s a labor of love.

He moved his shop to Doncaster in 1991 after establishing his business in Bridge Road, Richmond, 11 years earlier.

“There were five butcher shops in Bridge Road when I left and five years later the last one closed.”

Mr Watts had hoped to be a chef until he started a part-time job with a local butcher.

“The owner drove a Pontiac and never worked, the manager drove a Fairlane, the butcher drove a Valiant and they all had good looking women,” he said.

“I never went back to school. But to know what I know now, and still find it so interesting and inspiring is the best thing.”