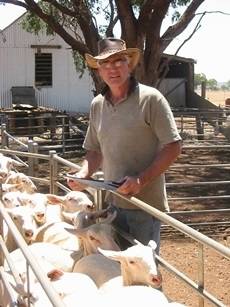 By placing meat quality traits at the forefront of its genetic selection during ram breeding, the Superwhite group is positioning itself as a key supplier of rams which will help industry continue to meet consumer demands for tender and flavoursome lamb.

Superwhites is one of nine stud breeding operations participating in commercial-scale DNA trials being conducted through the Genomics Pilot Project being run by the Cooperative Research Centre for Sheep Industry Innovation (Sheep CRC).

More than 1500 DNA tests were allocated for use by these early-adopting studs, with a further 1500 tests allocated for smaller-scale testing by sheep breeders across the country as part of the research program aimed at defining the most effective use of the new technologies in practical breeding programs.

“Breeding values for intramuscular fat and tenderness will now be considered when selecting ram lamb sires for use across the group,” Mr Long said.

“Good scores for meat eating qualities may lead to the selection of an animal that wouldn’t have been chosen for weight, fat and muscle alone. Similarly if an animal is strong across these ASBVs but has poor results for intramuscular fat and tenderness, it won’t be selected.

“This year research breeding values for meat eating quality will be a mandatory selection criteria for the nominated ram lambs of which approximately eight are selected as sires for use across the group.”

Super Whites is a collaborative group of 20 White Suffolk breeders spread across Australia and have been in operation since 1995, producing around 3000 rams annually.

The new genomic testing program requires every member to test at least 10 sires in their young ram drop resulting in at least 200 young animals being tested for meat eating breeding values. The nominated eight top rams are then used as sires across the member group along with a link sire.

“Good meat eating quality provides another selection criterion for an animal and we want White Suffolks to be front-of-mind when buyers are considering which breed of terminal sire they choose,” Mr Long said.

It is expected that the accuracy levels of estimated breeding values will further improve as a result of the additional data collected during the Genomics Pilot Project and through the Information Nucleus Flock program.

These breeding values help breeders to accurately predict which rams will produce the desired traits in their progeny. Another benefit of the genomic testing is that it allows selection of younger animals and this contributes to delivering faster improvements to the genetic gain in Australia’s sheep flocks.

It is believed that genomic testing of around 20% of a stud’s top young rams will provide cost-effective information to assist selection decisions for the next generation.

“We’ve discovered through benchmarking that we’re improving our genetics faster than the average of all terminal sire breeds for all commercially important traits, which as a group, is a great result.

“In addition to ASBVs, Superwhites will continue the genomic testing of ram lambs to identify animals that are going to offer excellent meat eating qualities.”

The cost of DNA testing is continuing to fall and future DNA testing to be offered through Sheep Genetics is expected to be around the $50 cost of the research Pilot Project testing program, but without any restrictions on the number of tests.