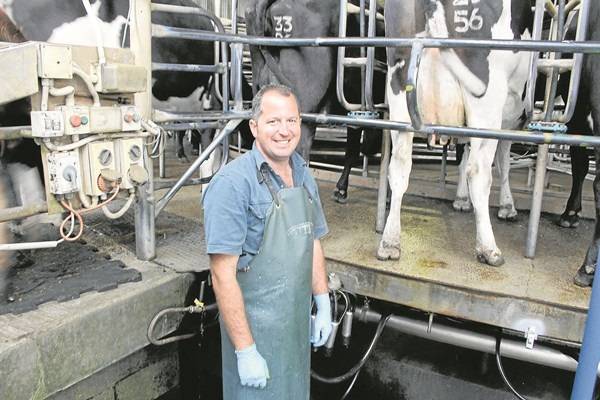 Luke Benson manages milking and management of the 250 Friesian and Jersey herd at the property, which has become a popular pitstop for tourists on the way to the 12 Apostles.

SEVERE drought and excessively high feed prices in 2002-03 almost crippled Julian and Dianne Benson's Cooriemungle dairy, but some innovative thinking using five per cent of their production has milked their net income by 25pc.

SEVERE drought and excessively high feed prices in 2002-03 almost crippled Julian and Dianne Benson's Cooriemungle dairy, but some innovative thinking using five per cent of their production has milked their net income by 25pc.

Despite being in the prime dairying region of western Victoria and developing for more than 20 years through booming growth, the farm's business became extremely tough to continue when milk prices slumped to 18 cents a litre, almost half 2001 prices, forcing the Bensons to research survival options.

"There is only one thing I can remember a politician saying that was worth repeating and that's when Malcolm Fraser said 'life wasn't meant to be easy'," Mr Benson said.

"My interpretation of that is, if you are prepared to work hard and make sacrifices to achieve what you want in life, the rewards are well worth while."

Located on the picturesque Princetown Road, Cooriemungle, en route to the Twelve Apostles, Mrs Benson wanted to tap into the tourism industry, as visitors on their way to the Great Ocean Road frequently stopped to view their Friesian and Jersey herd being milked.

Coinciding with a documentary on hobby farmers, Mrs Benson's idea planted the seed for a farmers' market-inspired speciality cheesemaking operation where tourists could see the cows before milking then watch the cheese being made – an educational experience of one of South-West Victoria's main industries.

A rudimentary cheese-making course at Gilbert Chandler, Werribee, sparked a passion for cheesemaking, proving the Bensons had a knack for it.

They took the leap and built the Apostle Whey Cheese factory in 2005 after 24 months of extensive research.

"We were now about to deal with people rather than livestock," Mr Benson said.

"To go into a new business that we had very little knowledge of was daunting and exciting. There was so much to learn not only in the actual cheese-making but in other areas such as dairy food safety, building regulations, product labelling, marketing, good record-keeping and a host of other things while still looking after our herd of 350 milkers.

"The transition went reasonably well as we were confident the farming enterprise was sound and a good back stop for us."

The farm is subdivided into 53 milking paddocks with a further 10 paddocks of smaller size for calf rearing, just 18 kilometres from the Twelve Apostles.

Since making the move into speciality cheesemaking, the Bensons have dropped their milking herd down to 250 cows. This is to focus on crossbreeding with Jerseys and Aussie Reds to get higher solids and bigger yields for their supplier as well, to add more flavour to their cheese.

With up to 1.8 million people visiting the Twelve Apostles tourist attraction each year and business humming, they have recently doubled the size of the factory and aim to attract more tourists through relationships with tour operators.

"Nothing comes easy and we learnt very quickly once we started that you had to get out and promote your business, so we did farmers' markets and major events every weekend for a number of years," Mr Benson said.

Apostle Whey Cheese use about 5pc of the produced milk for their factory which has increased their income by 25pc, with the balance going to Warrnambool Cheese & Butter Factory.

"We intend to double production this year and continue to expand to use 50pc of our milk within 10 years," he said.

"We are keen to encourage families to see how a dairy farms operate, from calving cows down to milking and then producing products from the milk.

"We would like to believe that those kids who may not of had any experience of farming may look at the environment we work in, the challenges that farming offers and may consider farming or many of the related industries for a career path."

And if there were any questions about the decision, they are quickly overshadowed by shelves of awards including Alternative Farmers of the Year in 2007, several gold medal cheese awards and the prestigious champion white mould cheese and champion cheese of the show in the Dairy Industry Australia Awards in Melbourne in 2011.

"We believe we have only scratched the surface when it comes to the potential of our enterprise and are now expanding our factory to increase production, add new products and expand our tourism market," Julian said.

They hope to further expand by tapping into new outlets in the boutique sales trade and the likes of Independent Grocer of Australia and Food Works.

"If we grow the market, we will need to employ more staff which in turn, hopefully, will free up more of our time," Julian said.

"The big challenge now is to seek out those outlets and at sometime in the future we may even look to bring in an equity partner."

For those inspired by the Benson's move, Julian gave some wise words of advice, "do something you enjoy otherwise it will be a flop. He added, thoroughly research the product, do a swat analyses and have plenty of time and patience."