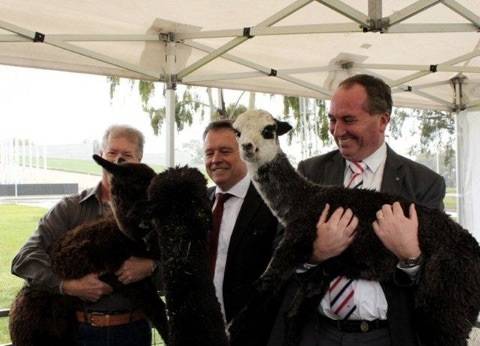 ON the back of the world’s first alpaca export to Turkey this month, protocols to China are nearing completion and it is expected the first shipments of Australian alpacas will be on their way within months.

ON the back of the world’s first alpaca export to Turkey this month, protocols to China are nearing completion and it is expected the first shipments of Australian alpacas will leave within months.

Export protocols between the two countries are reaching the final stage of approval, which Australian Alpaca Association president Michelle Malt said the trade potential in Turkey and China was enormous.

“After two decades of exceptional breeding advances, Australia, with its quality herd of 150,000 registered alpaca, is well positioned to meet international demands for quality and quantity,” Ms Malt said.

“Turkey, one of the largest textile producers in the world, is now entering the burgeoning international alpaca industry, and they have chosen to rely on premium Australian genetics.

“It speaks volumes for the breakthroughs our young rural industry has achieved in elite breeding.”

Ms Malt said Australian alpaca bloodlines were evident in herds in New Zealand, United Kingdom and Europe, where they have been sought over the past decade to improve herd quality.

A relative newcomer to the alpaca industry, Ms Malt said China was stepping up its production of luxurious fleece.

She said Australia had reached a milestone in the development of fine fleece exports with the first professionally classed alpaca bales now stamped with an official guarantee of quality issued by the Australian Wool Exchange (AWEX).

“The AWEX stencil designed for our industry puts Quality Assured Australian Alpaca fleece on the international market in the same way Merino wool is sold around the world,” Ms Malt said.

“As our industry moves closer to realising full commercial viability, this achievement is a fantastic reward for our ongoing work in consolidating fleece collection methods.

“There are more than 2,000 Australian breeding studs of between thirty and 2,500 animals and our challenge to date has been to collect enough fleece to form the bulk needed to meet the demands of international designers.”

In a recent collection trial, more than 5,000kilograms of fleece of all colours and qualities was sourced from around Australian and resulted in 40 bales that would soon be stenciled with the new AWEX quality assurance.

“I’ve been classing merino since the late 1960s and have had an increasing interest in the way Australian alpaca has been growing in quality,” Ms Carter said.