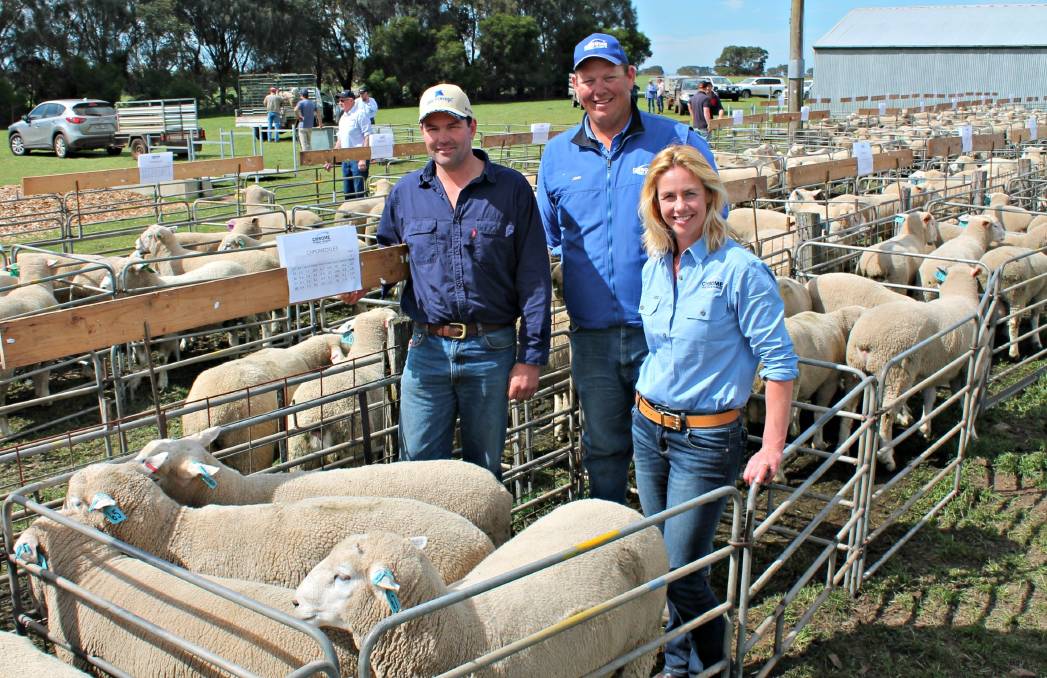 Stud owners Matthew and Tanya Tonissen enjoyed a stellar sale with a 100 per cent clearance, grossing $513,900 and averaging $1226 per head.

Check out auctioneer Craig Pertzel's comments on the sale here

Marcus Gellert, Kookaburra, Glenthompson, was the winning bidder on the top-priced Chromedale, at $2600. The August-drop ram recorded a birthweight of 0.4kg, weaning weight 6.1kg, post weaning weight 10.2kg, Maternal Index of 130 and measured a PFAT -0.1 and PEMD 1.1.

Like several clients at the Chrome sale, Mr Gellert is transitioning Kookaburra's first-cross flock to a composite-dominated prime lamb operation.

"We run a pure Merino flock as well but have been moving to prime lambs because of their lambing percentages, doing ability during summer and self-replacing ability," Mr Gellert said.

"We were willing to pay good money because we've been buying here for six years and know that the rams hold up well, and are in demand by the look of it."

Competing bidder Phil Rees, Erindale, Balmoral, said Erindale was also stepping out of first-cross production due to wool returns and moving to composites to focus on the lamb market.

"Our story is similar to a few blokes here which has made the sale tough and harder to buy-in," he said. "You had to be dedicated to ultimately buy your selected rams during the solid sale."

It was a similar story for new client John Dean, Sarona, Coojar who purchased 12 Chromedale rams, av $1350, to join to their first-cross ewes as self-replacements.

The first appearance of the Icon Southie at an October Chrome ram sale was met with keen interest, with the small offering of 23 rams sold to $1500, av $1146,

Despite the growing concerns of a tough spring, Manifolds contract manager Leigh Harry, Camperdown, said the solid sale reflected the confidence in the lamb industry.

"With a tough season up north and one likely turning here, there are still enough signals underpinning the market for serious lamb producers to invest in genetics," he said.

"I think contracts that have been put out and have further given producers confidence, while attracting more producers to transition to prime lamb."

Opening the sale, Mr Tonissen said the maternal indexes this year had taken a "giant leap" forward with nearly half of the Chromedale rams in the top 25 per cent of the LambPlan maternal data base.

"All rams across all breeds are extremely even from top to bottom for type and are undoubtedly the best drop of rams we have produced to-date," he said.