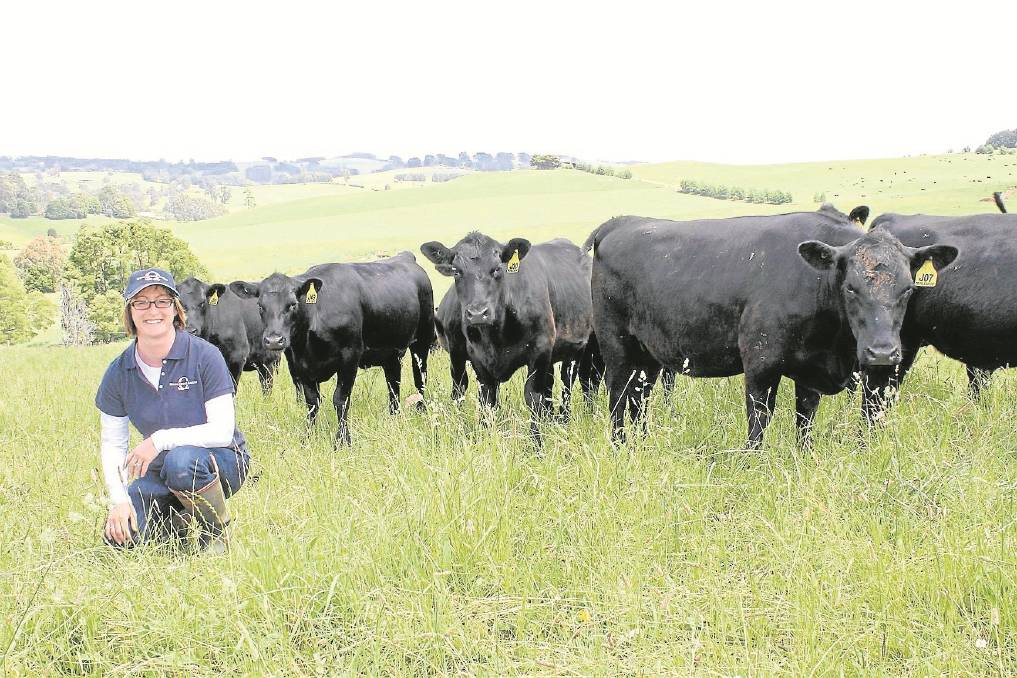 Anne Marie Barrow with Merlewood Angus heifers which have just been joined at the approximate age of 14 months.

A BACKGROUND in project management has helped Anne Marie Barrow make tough decisions that have been vital to Merlewood Angus stud capitalising on its impressive foundation herd.Stud lays strong

A BACKGROUND in project management has helped Anne Marie Barrow make tough decisions that have been vital to Merlewood Angus stud capitalising on its impressive foundation herd.

Anne Marie and Daniel Barrow established the Mirboo North-based stud in 2009 with a herd that, while small in number (about 20 animals), was huge in respected bloodlines, including cattle from Lawsons, Te Mania and The Grange.

"We're big believers that if something is worth doing, it's worth doing right," Mrs Barrow said.

They have built up the herd to recently join 200 breeders, which involved artificially inseminating (AI) 70 cows and 40 heifers and performing 25 embryos transfers.

These reproductive technologies are used to speed up genetic gain.

They also use bulls in the paddock, and in October purchased Irelands Hierloom H343.

Mrs Barrow said the bull had Fletcher bloodlines which had proven to be excellent in the stud.

"We are big believers in maternal genetics being as important as sires – they bring a lot to the party and do a lot of the work," Mrs Barrow said.

Females are joined over three cycles: they are AI'd for one and then a bull is put out with them for two.

"Those that take in the third cycle roll over into commercial herd to increase the stud herd's fertility," she said.

As well as fertility, the key to holding position in the stud herd is having a great temperament and sound structure.

"We thought and still think it's better to make tough decisions early on because of their flow-on and multiplier effects in the breeding program," she said.

The Barrows keep only cattle that Ian Moreland, Stud Care Genetics, assesses as having score five or six (ideal or close to ideal) feet and leg structure, which are important for performance and longevity.

They are also looking to moderate frame sizes.

The Barrows also evaluate the animals' feed use efficiency, including by weighing cows and calves to benchmark, which breeders keep condition and/or raise a good calf.

"EBVs (estimated breeding values) are only one tool in your toolbox but the performance you can measure and what you see in the paddock helps make the final decision," Mrs Barrow said.

She said being new to farming also helped her to be open to new ideas.

"In the first year on the farm, we farmed more traditionally, applying chemical fertilisers, but now we try to farm naturally where possible so we rotationally graze and add mulches and microbes to the soil and minerals in the troughs.

"And it shows in the cattle.

"They are more balanced and healthy so the vet bill is the same now for a herd of 200 breeders as it was back then, when we had 50 cows."

The couple are achieving the goals of the five-year plan they created when starting the stud, including buying a neighbouring farm and last year securing the lease of land to bring the total area available to farm to 263 hectares.

They plan to expand the stud to 250 breeders.

"In the past three years we've sold 30 bulls annually privately and we're growing our client base, with the plan to host an inaugural on-farm sale in 2016."