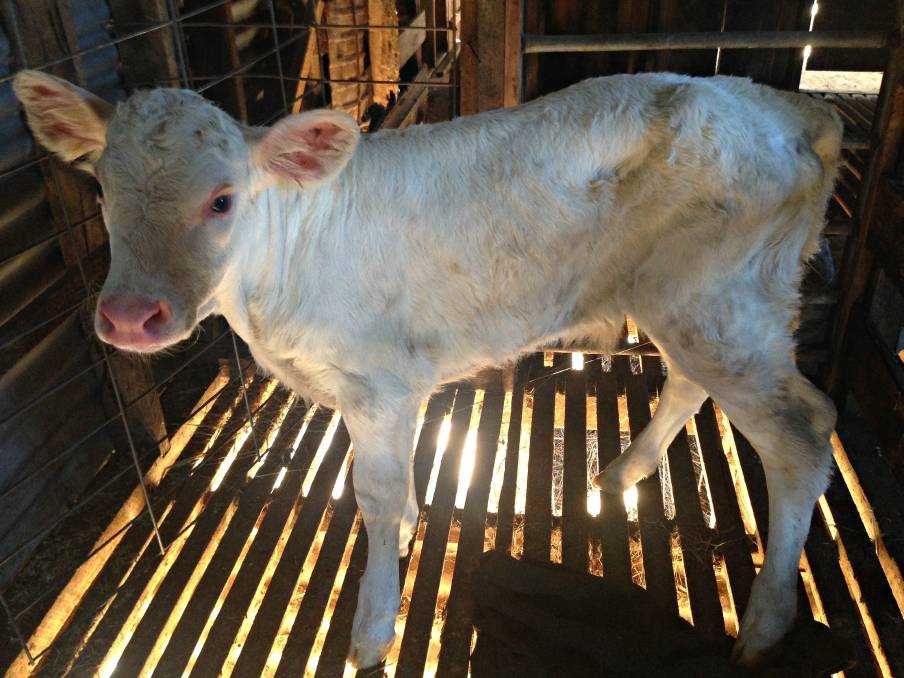 IN WHAT is an extremely rare occurrence, an Albino Hereford calf (pictured) was born on a Western Victorian farm last week.

IN WHAT is an extremely rare occurrence, an Albino Hereford calf (pictured) was born on a Western Victorian farm last week.

Jeanette Carmichael, who works on the Gerrigerrup farm, between Penshurst and Macarthur, was surprised to find the white bull calf in the paddock. Her daughter Jade sent the pictures of the young animal to Stock & Land, via Facebook.

"He was a pure Hereford twin and had been abandoned by his mother, but his sister had completely normal Hereford markings," Ms Carmichael said.

"I thought it was very strange. It's definitely the first time I've seen something like this, and we probably see 250 calves a year."

The owner of the property, Mayoh Thomson, 83, admitted he had also never seen an albino calf before, and he's been breeding cattle for 60 years.

Ms Carmichael said they generally separated one twin from their mother, and fostered the second calf to another cow.

"We think it gives it a better chance of growing out properly, and it's easier on the mother," she said.

"But this cow had left the calf in the paddock. I'm not sure if it was because it was all white, or because it's been so dry here."

About 300 Hereford cows are run on the farm. Heifers are joined to Angus cows to produce black baldy calves, but after the first calf - cows are then rejoined to a Hereford bull.

The healthy young Albino calf is now being looked after by Ms Carmichael, but the plan is to find another cow to foster him soon.

"We will keep him for now; I'm not sure what the plan is down the track."

NSW-based livestock veterinarian Dr Laurence Denholm, who has done research on cattle defects, said albinism occurred in all species, but it was very uncommon.

Looking at the picture of this calf in particular, he said the dark pigmentation of its eyes suggested it did not have the more common form.

"With the true form, the animals have pink skin, pink eyes and white hair. But this little guy will still suffer from sunburn," he said.

"He does have a survival disadvantage."

Dr Denholm said he would encourage anyone who had calved down Albino cattle on their farm to store a DNA sample, which included tail hair, with hair follicles attached.

"And if it does happen again, we can put it together with other cases, and that's how we get a better understanding of these rare disorders."