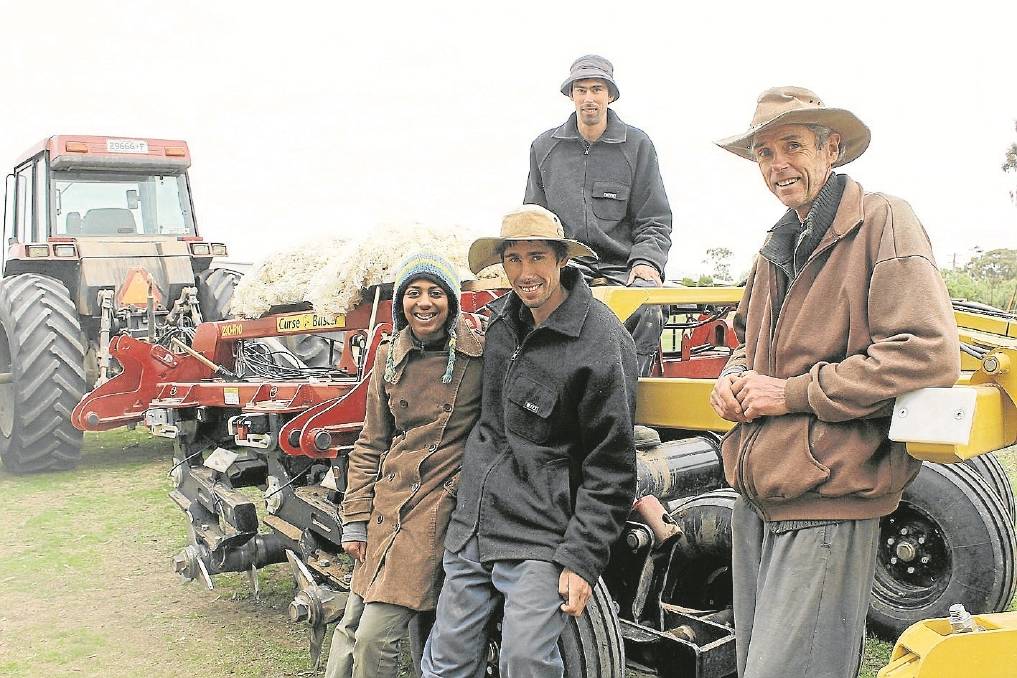 Greg Mortlock, Dunluce, with his nephews Leigh and Wayne, jillaroo Rachel Wood, and their new soil aerator, the Curse Buster. The machine was imported from the US, and the Mortlocks will be using it to aerate their paddocks, and in turn grow more feed and increase their wool clip.

Brothers Greg and Malcolm Mortlock run about 2000 Merino sheep on their Dunluce property, with the help with Malcolm's sons Wayne and Leigh, as well as jillaroo Rachel Wood.

The central aim of the business is to produce kilograms of wool, and this is something the family has focused on for a number of decades.

This philosophy has led the family to introduce fibre testing to their flock in an effort to find out exactly what minerals their soil lacked.

"It's the first time that fibre testing has been done on sheep … it's something the dairy industry has done for a while," Greg said.

Based on the results, he creates a special lick formula for the sheep, which incorporates the required minerals the flock needs.

"It takes a lot to produce good wool, and this is something we felt was important," he said.

As a result of the fibre test and specialised licks, the flock has been thriving.

"They are a lot calmer now," Rachel Wood said, the property's jillaroo.

"Weaning weights were up by about five kilograms at the age of four months," he said.

Fertility has also benefitted from the introduction of the lick formula.

"We have a much tighter lambing period now," he said.

"The ewes basically all got pregnant on that first cycle, and we noticed a lot more twins and triplets."

Some of the older ewes at eight years-of-age were also producing some of the flock's top ram lambs.

"Dad used to sell ewes at four or five years-of-age, so that really tells you something," Greg said.

But the Mortlock family knew that licks were only a "band-aid" solution to rejuvenating the property's soil profile.

They wanted to dig deeper, and this decision led them to importing the first Curse Buster soil aerator to Australia, with the help of Jim and Dan Martindale, Indiana, and Allan Pearce, Advantec.

"We knew that if we could break the soil up, and aerate it, the roots would be able to grow deeper and access moisture better," Greg said.

"If we could successfully do that, we wouldn't need the licks down the track. It is all about retaining moisture in the soil."

After some research and a hefty economic outlay, the Mortlocks' new Curse Buster arrived on April 28.

Already, they've used the machine to aerate a couple of paddocks, and put the stubble back into the ground. They then applied lime, copper, zinc and boron to improve fertility.

"We planted some vetch hay crops in the paddocks, and they look great," he said.

But the aerator isn't expected to boost production overnight.

"We know it's a long-term solution," he said. "We're passionate about this, and know that it will go a long way to improving the farm and our bottom-line."

Apart from investing in soil improvements, the Mortlocks also believe that top genetics are important.

The family has purchased rams from the historic Charinga and Banavie Merino studs for 74 years in a bid to produce elite, crimpy wool.

"Our father Neil and uncle Henry, who ran the famous H&N Partnership together, always bought rams from Charinga and Banavie, and that's something we've continued," he said.

"It really sets our wool apart."

The ewes are joined in November for an April lambing, while shearing starts in July.

The flock produces medium to strong wool from 19.5 to 22 microns, depending on the season, with an average cut of 7-8 kilograms.

"We assess the rams visually. They need to have that soft, loose skin and no hair on the belly.

"The aim is to get those heavy-cutting, big-bodied sheep."