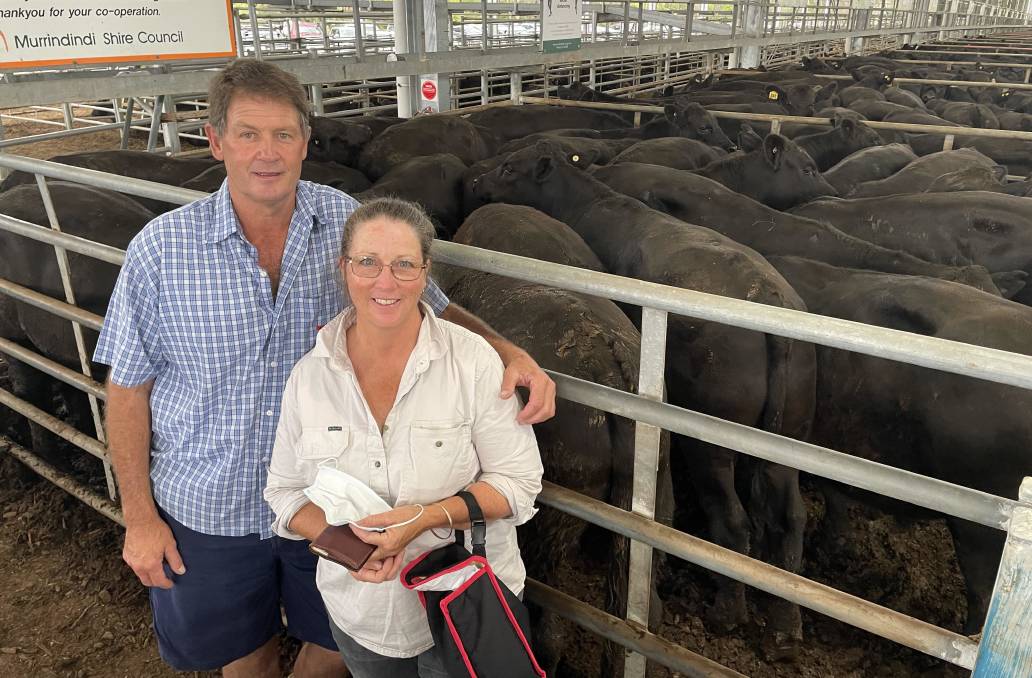 Selling centre records were broken at the 35th Elders Yea Annual Blue Ribbon Weaner Sale as the centre set the highest weaner prices "by a canter".

Like 98 per cent of the yarding, the Box Hill Pastoral calves were consciously yard weaned for more than a month and supplement fed silage.

"We looked after the calves better through weaning because everything dried off so quickly," Mr Spagnolo said.

Hot on their heals was the offering of siblings Lee and Renee Drysdale, and dad John Drysdale, of The Lily's Pastoral, Yarck, who offered 289 Angus weaners, including 220 steers that av $2530, or 721c/kg.

Elders Yea auctioneer Jamie Quinlan said it was an "enormous sale", setting a new sales record for weaners sold at the centre.

"The highlight of the day was the joinable heifers," Mr Quinlan said.

"I've never seen a heifer sale like it ever - it was unbelievable."

"There was enormous breeder support with people buying them to join, join and sell, join into herds.

"Coloured heifers were a little tougher to sell - black baldies, greys and Charolais were a bit tougher and back to the mid 500c/kg," he said.

"My gut says prices should stay here for the next three years because our global cattle herd is low," he said.

"The world needs more meat so we need to grow more beef. We are seeing feedlots put pressure on our breeding numbers which is compounding the need for more cattle."

"We had two northern orders, one was for EU accredited, 350-400kg, and we were anticipating to pay 640-680c/kg but we were blown out of the with those prices," Mr Tinkler said.

Mr Tinkler said he failed to secure purchasers for a northern backgrounder chasing Angus steers, 330-370kg, with "significantly less money than what was needed today".

Mr Tinkler said the northern orders were underpinning the power in the southern weaner sales.

"Some of the northern orders that were here earlier in the week have standing orders remaining," he said.

"We had orders to buy cattle here today and we haven't been able to secure the cattle."

Mortlake's massive yarding was no deterrent on buying interest at Yea he said, with Yea's high weaning rate known for calm calves and quality lines of breeding cattle a magnet for buyers.

"It is a quality lineup - you are buying outstanding cattle with a lot of confidence and you can see that flow on in the sale," he said.

Despite market factors supporting the record high prices, Mr Tinkler said some clients were uncertain about the sustainability of prices.

"The situation is that there is a lot of grass and the reality is if you're not in the market trying to buy cattle now, I don't know where you will find cattle with weight for a little while.

"It's a supply and demand issue and we have seen the price go to a level that has been justified because of the rates people are selling heavy cattle in the last four months.

"There is an uncertainty about what that next trade looks and we won't know where that is until mid-winter or early spring."