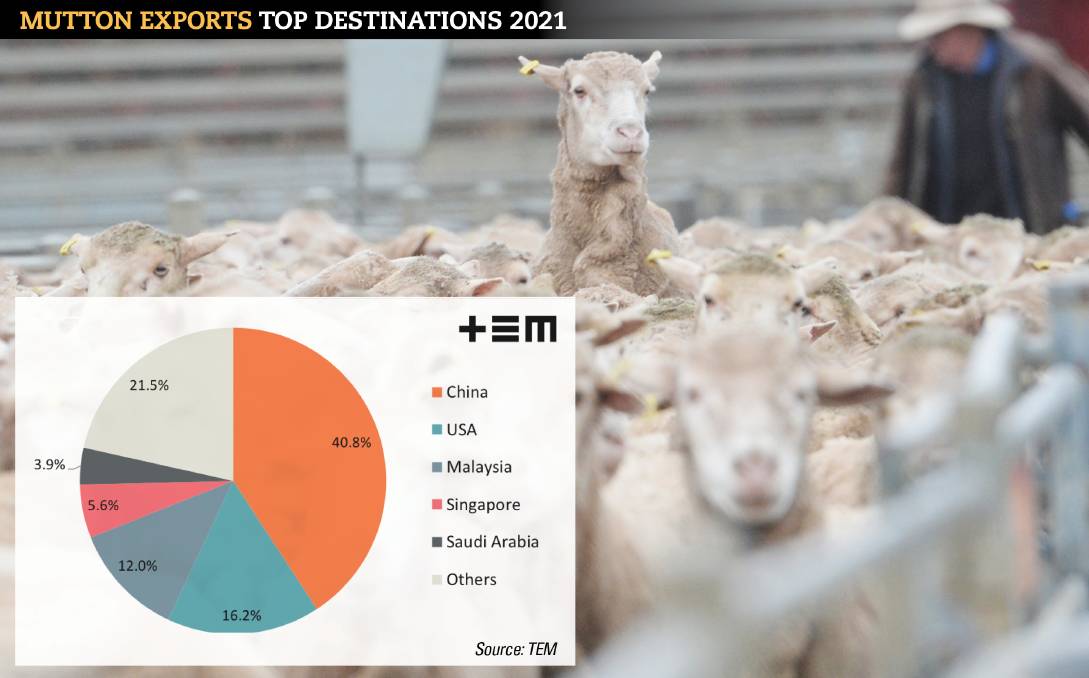 OUTLOOK: China increased their share of Aussie mutton exports in 2021, but it was the US that broke records with some robust volumes.

China increased their share of Aussie mutton exports in 2021.

This is according to the Department of Agriculture, Water and Environment (DAWE) trade data released this week which also showed the US remaining in second place behind China.

But Thomas Elder Markets analyst Matt Dalgleish said it was the US that was best in terms of growth of market share.

"The 2021 season was an exceptional one for mutton exports to the US with their market share expanding to 16.2pc of the total trade from 12.8pc the year prior," Mr Dalgleish said.

"Last year was strongest annual mutton export volumes to the US on record, nearly 27pc above the 2020 figures and 48pc higher than the annual average, based on the last five years."

He said despite reporting softer flows in December, which eased 33pc over the month to record 1900 tonnes for the final month of 2021, the total annual mutton exports from Australia to the US for the year was a robust 22,743 tonnes shipped weight (swt).

Malaysia retained their third place position with a small increase in market share from 11.5pc in 2020 to 12pc in 2021.

Singapore and Saudi Arabia saw marginal declines in their share of the trade, from 5.9pc to 5.6pc and 4.5pc to 3.9pc, respectively.

Mr Dalgleish reported total mutton flows to China for 2021 were 57,343 tonnes shipped weight (swt) - 3.4pc higher than 2020 and 16pc above the five-year average annual figure after some strong results were posted in February and March of 2021.

"Aussie mutton exports to China ended the year the five-year average pattern at 7018 tonnes in December," he said.

"Mutton exports to 'other destinations', excluding China and the US, continued to improve with a 20pc lift over December to post monthly levels close to the five-year average pattern for the first time in 2021."

But total annual mutton exports from Australia to other destinations ended the 2021 season nearly nine per cent softer than the 2020 trade volumes with just 60,509 tonnes.

This was 34pc below the 91,700 tonnes seen annually, according to the five-year average trend.