UPDATED: Shenhua has sold its three holdings on NSW's Liverpool Plains, totalling 16,500ha for around $120 million. 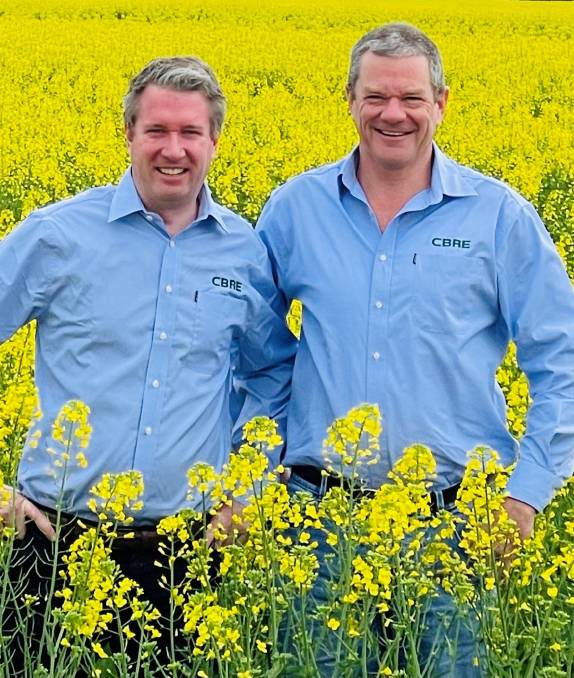 CBRE executives James Auty and David Goodfellow were delighted with the results of the Shenhua sale in NSW.

The 16,500 hectares of land near Gunnedah, spread across three major holdings at Tambar Springs, Barraba and Breeza sold for $120 million.

The land was sold to 12 local farming families along with an undisclosed corporate investor, with the family farms purchasing around two thirds of the land and the corporate the remaining third.

CBRE's agribusiness team negotiated the sale, which saw many of the blocks split up into smaller parcels.

CBRE's agribusiness managing director David Goodfellow was delighted with the result, saying it delivered a good outcome not only to the vendors but to both the local farming and institutional investor sectors.

Shenhua Watermark purchased the land with a view to setting up coal mines, however last year it made a deal with the NSW government to return its exploration license and withdraw its mining license for the site.

The proposed mine developments were clouded with controversy, with protesters claiming that the land, among Australia's best farming country, should be retained for food production.

Mr Goodfellow said the Breeza block created the most interest.

"It has great cropping prospects and some irrigation, so it was very highly sought after and sold for an average around $6000 an acre ($15,000/ha), while some of the Barraba stuff, which was bought primarily as an off-set, is more scrubby and made less than $1000 an acre ($2500/ha)," Mr Goodfellow said.

He said negotiating the sale was made more complex by the issues arising from NSW's lockdowns in the midst of the process.

"We made a very genuine commitment at the start of the sale process to give local producers a proper and equal opportunity to be successful in purchasing land, and we worked hard with both the family farming sector and the corporate farming sector to give everyone a fair chance, regardless of the extra work involved," Mr Goodfellow said.

He said there was good competition for the properties, with local farmers having recovered from the horrors of the 2018-19 drought.

"Families in this region have recovered well from the drought and are now looking to expand their operations to capitalise on low interest rates and the continued strength in commodity prices to make inter-generational buying decisions," Mr Goodfellow said.

Mr Goodfellow said the Gunnedah region was well-known for its highly productive soils, its wide range of well-proven agricultural systems and its typically even distribution of rainfall throughout the year, contributing to the land being keenly sought after.

"The rainfall pattern in this region means it can grow pastures for breeding and fattening livestock right through the year as well as growing both summer crops and winter crops for grain and fodder," he said.

There are also opportunities in the burgeoning regenerative agriculture space.

"Some of the land is also highly suited to regeneration of soils and native forests and may be suitable for projects to create carbon credits, which are quickly becoming very valuable given the current demand to achieve targets of net zero emissions," Mr Goodfellow said.

The vendors were also happy with the result.

A Shenhua spokesperson said it was particularly pleasing that the sale process had returned much of the land to the local farming community.

"We have owned the majority of these assets for over ten years and have formed good relationships with the farmers who have continued to work the land," the Shenhua representative said. "Given these properties will now be retained for farming instead of being used for a coal mine, we are delighted that CBRE has been able to work with local families to give them a real opportunity to purchase a significant portion of the land," they said.

The CBRE sale process resulted in 59 inspections from 49 interested parties over a total of five weeks.

A total of 45 expressions of interest were received for all or part of the three Shenhua aggregations.

Two separate families have acquired the 1,208 hectare Tambar Springs aggregation, which comprises three non-contiguous holdings within two kilometres of each other.

The holdings are currently used for both mixed dryland cropping and beef cattle production.

Another two separate families have purchased the Barraba aggregation, which has a total land area of 1,114ha and comprises two non-contiguous, nearby landholdings.

The land area is principally used for beef cattle and sheep production.

Breeza was the largest of the three aggregations at approximately 14,270ha and is currently used for dryland cropping and beef cattle grazing with the opportunity to irrigate, benefited by access to water access entitlements.

It has been divided up between eight local families and one corporate farming business.

RELATED: Shenhua properties up for sale

One of the local purchasers of the Breeza land was the Warmoll family, who operate the well-known Jack's Creek cattle and beef business.

"We are very grateful that CBRE went to the effort to give locals a chance to purchase part of the whole aggregation," Patrick Warmoll said.

"Our acquisition of some of the land at Breeza has enabled our family business to bolster our landholdings in this area which helps us to further expand and solidify our business for our next generation," he said.

Another of the local purchasers of the Breeza land was the Norman family, who operate a successful row cropping business nearby on the Liverpool Plains.

While the Norman family acquired a relatively small parcel of just 183ha, Lisa Norman said it was an important purchase.

"We are grateful to CBRE and Shenhua for allowing us to be able to purchase this land which neighbours our existing landholding," she said.

Mr Goodfellow noted that the successful corporate entity had requested that their identity remain confidential until a FIRB approval process had been completed.

"This entity is a well-known institutional investor focused on acquiring land that can be improved with highly sustainable farm development practices," Mr Goodfellow said.

He said they have acquired approximately 5,860ha of the Breeza aggregation, which will be used for mixed farming including livestock production and both summer and winter row cropping."

Mr Goodfellow noted that five agricultural corporations had been interested in purchasing the whole of the Breeza aggregation because of its scale, location and land quality.

"While the successful corporation was also keen to purchase the whole aggregation, they were also willing to purchase just part of the aggregation if that meant some local families had an opportunity to purchase smaller amounts of land in sizes that were affordable to their own businesses," Mr Goodfellow said.

"ESG (environmental, social and governance) is a bit of a buzzword at present, but that social aspect is really important to the corporate buyer and they want to exist harmoniously with the local farming community," he said.

"This is what made the process work for multiple stakeholders,'" he said.