Well bred first cross ewes were sought after at Ballarat and selling to good inquiry. 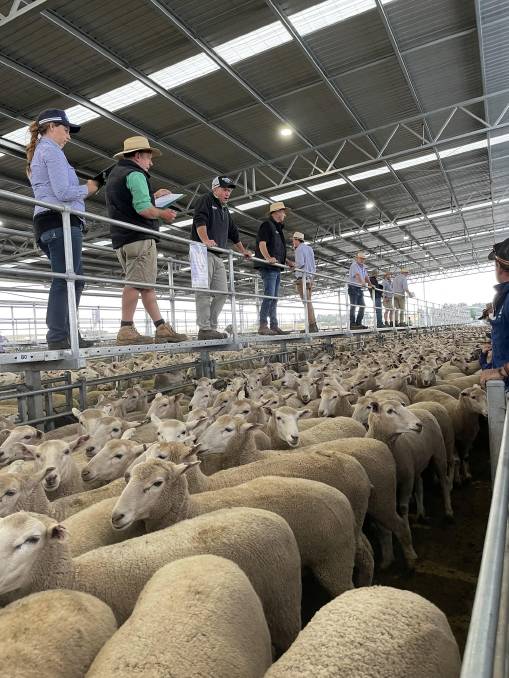 GOLDEN: Golden Grove forwarded a draft of May/June 2020-drop, November shorn, ewes out of Brooklands ewes and by Enfield Border Leicester rams to a top of $422.

It was a regular crowd of buyers with Gippsland and central and western district buyers providing the bulk of orders.

The first pen of the sale was a line of 200 Border Leicester/Merino-cross ewes, 1.5 years, November shorn, sold account Cornhill Pastoral, made top money of $494.

Rogers Brothers, Pura Pura, sold a pen of 173 BL/Mo-cross ewes out of Eastville-blood ewes and by Wattle Park rams, that sold for $444.

TB White & Sons agent, Tom Madden, said the top runs of 1.5 year-old ewes were similar to the sale before Christmas.

Mr Madden said the lighter drafts of vendor-bred sheep were slightly dearer than the December sale with most making $340 to $380.

The following pen of 181 account the same breeder sold for $332.

Lighter ewe lambs were in strong demand from restockers with most selling from $180 to $250.

A draft of ewes, May/June 2020-drop, November shorn, out of Brooklands ewes and by Enfield Border Leicester rams sold account Golden Grove, Newlyn, sold to a top of $422.

Nutrien livestock manager, Xavier Shanahan, said there were a larger percentage of lighter sheep in the yarding.

He said that was a reflection of the seasonal conditions not being favorable for "sheep doing ability".

"It was a good solid sale, with buyers comfortable working around these values and breeders are selling at pretty good money," he said.

Also in the lamb yarding was a pen of 164, May/June 2021-drop, October shorn, ewes that were sold account Andrew and Sharon Lockhart, Wychitella near Wedderburn.

The pen was described as "joinable weight ewes" that were out of Charinga-blood ewes and by Blackgate rams, and sold for $320.