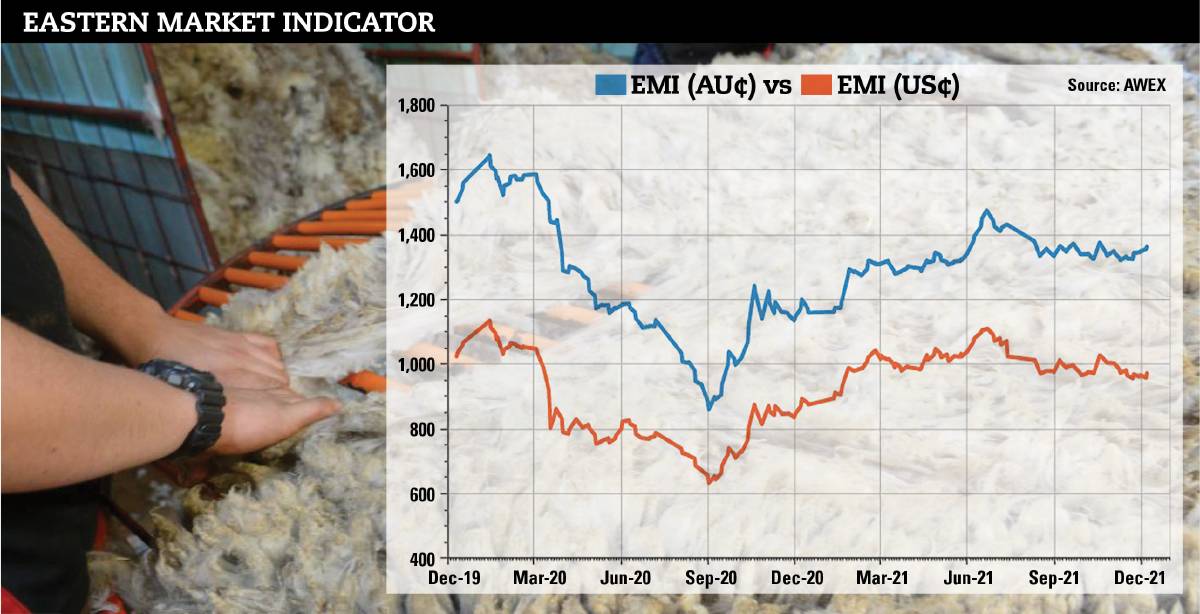 The 2021 calendar year was one of recovery for Australia's wool industry after a tough 2020, as demonstrated by the Eastern Market Indicator.

Australia's wool sector showed resilience in 2021, as the industry recovered from the blows dealt by COVID-19 during 2020.

Australia's wool sector showed resilience in 2021, as the industry recovered from blows dealt by COVID-19 during 2020.

After falling the Eastern Market Indicator plummeted to 858c in late August 2020, the market regained ground over the first half of 2021 to reach a peak of 1472c on June 22.

The lowest point for the year was on January 12 when the EMI was 1159c.

The finer the wool the better it performed during 2021, while the broader wools still faced a tough year.

"Obviously COVID had a massive impact on consumer spending so we were all impacted by COVID terribly... we all think the market has performed wonderfully," he said.

The price rally gave the wool industry renewed confidence, although plenty of challenges remained with Chinese electricity shortages and high shipping costs among the factors putting pressure on the market.

"Within the crossbred market, you really need to have wool under 26 or 27 microns to have any sort of an acceptable level at all," he said.

"Broader than that it's very flat... there's a glut of that type of wool worldwide."

Mr Woods said while the finer wools performed well early in the year, shipping issues started to have an effect as the year progressed.

"China especially put the brakes on for a while," he said.

"At the same time we saw Italy and Europe generally re-emerge into the market for a short period and that gave everyone a bit of renewed enthusiasm.

"The bright spot for the year has been the huge premiums we're now seeing for Responsible Wool Standard certified wool that's not mulesed ... I'm talking 20 per cent."

Mr Woods said exporters were suggesting that following Chinese New Year at the start of February, the market in 2022 would be more buoyant.

"Their long term view is optimistic," he said.

WoolProducers Australia president Ed Storey said the industry was in a more positive place going into 2022 than what it had been a year ago.

"For some wool producers 2021 is their second good season in a row, for some it's their first, but it's generally a good season and that always gives you confidence," he said.

"The second thing is the wool market itself has shown pretty strong resilience.

"There was obviously a pretty strong external shock through COVID in 2020 and that continued in 2021 with the Delta strain.

"The wool market had some pent-up supply that didn't get sold and so we've put more wool through the auction system this year and even under that increased volume the market, across many micron categories has shown significant resilience, particularly at the fine end."

Mr Storey said this year there had been an uptick in composite type ewes and a slight reduction in Merino type ewes.

"The sheepmeat sector is very strong, the wool market has shown significant resilience but in many cases people are perhaps honing their production systems to what fits in best with their country and other enterprises," he said.

"We've got some work to do to ensure wool production continues a steady uptick.

"I think one thing that one thing that has been clear this year is the institutions we have in Australia, like AWEX in keeping the auctions systems going and AWTA in handling the high variations in test volumes that came through a big reduction in 2020... and then a surge through the first half of this financial year as the market recovered, those institutions handled the arrangement very well," he said.

"They cleared the wool, the market is accurately reflected and the sale and transfer of wool was able to continue.

"I think we're seeing that with groups like WoolProducers Australia, Australian Wool Innovation, AWTA and AWEX, where there are opportunities to work together and complement each other's work, that's going to be very important for the wool industry going forward to ensure that we don't waste resources and that we're all working together."