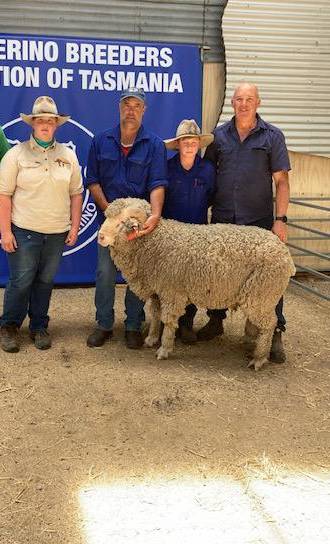 There's been a near-total clearance at the sixth annual Stud Merino Breeders Association of Tasmania annual sale, which topped at $6000.

The sale-topper was offered by Invercarron, Broadmarsh, Tasmania, with co-principal Andrew Jones saying the September 2020-drop ram was representative of the sires he was breeding, with 18.5 micron wool and big frames.

He was sold to the Weeding family, Okehampton, Triabunna, Tasmania.

"It was just a good solid ram, bred out of Yarrawonga bloodlines, it was a Horned ram, with a nice big frame and body," Mr Jones said.

"We are a relatively new stud and it is nice that two out of the last three years we have received the top price for our rams, which is great for us, because we don't have an on property sale."

He said Invercarron was a "boutique' stud which he hoped to keep as a 'niche' operation.

'"Well-nourished wool is a word that seems to come up with our rams.

"They are heavy cutting, everyone seems to get increased fleece weights, in their ewes."

Lauriston Estate, Kempton, paid the second top price of $5500 for a Rockford ram, bred by the Reardon family, Bothwell.

Elders livestock agent Damien Whiteley said there was a wide spread of buyers, with all rams selling to Tasmanian producers.

"The locals were very supportive of each stud," Mr Whiteley said.

"Most of the studs enjoyed a good average, it was a very solid market."

He said the nine studs at the sale offered Polled and Horn rams, from ultra-fine to 20.5 micron wools.

"Originally it was set up for smaller studs that don't have on-property sales, to open up their markets and display the sheep to everybody."