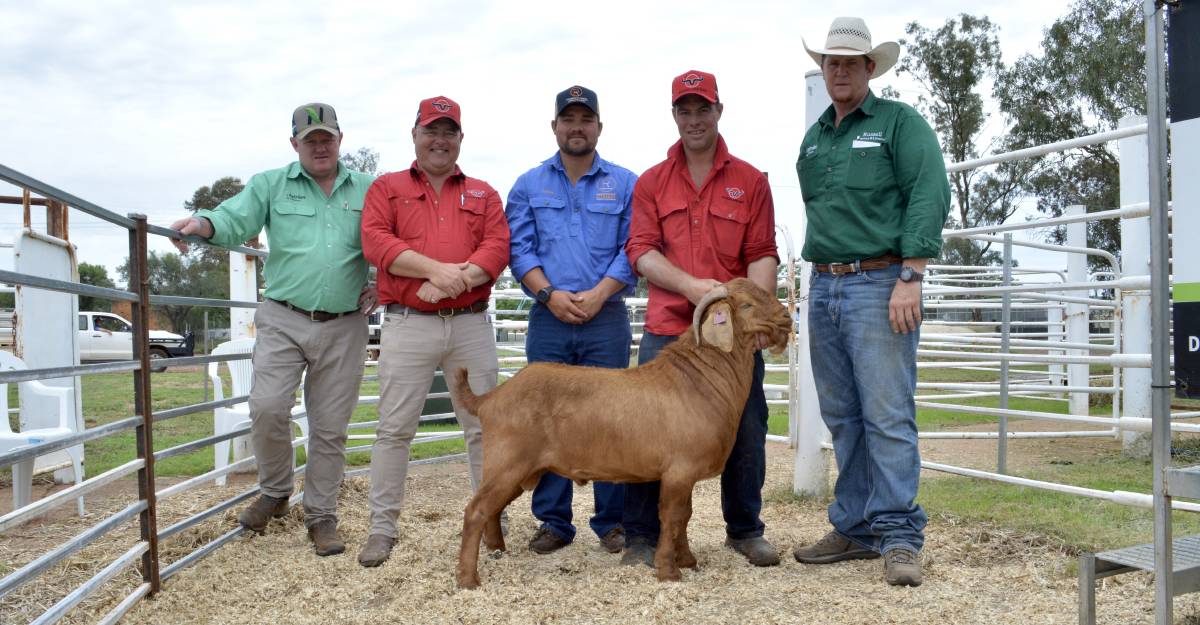 Several Australian records were bucked at the second annual Cobar Red and Black Goat Sale on Wednesday, where the strength of the goat industry was again realised as producers pushed prices into never-before-seen territory.

Overall, the result was a full clearance for vendors, Bunnaloo Black Goat stud, Moama, and Rangeland Red Goat stud, Goodooga, who sold 89 bucks and 38 does for an entire sale gross of $582,475.

To meet demand, the studs doubled the amount of bucks offered and tripled the does offered compared to last year's inaugural sale.

Previously the Australian record sat at $12,000 for a buck, but that record tumbled as prices kept climbing and a new benchmark of $21,000 made the history books.

It was Rangeland Red 20240 "Marrakesh" that demanded attention, offering high-performance packed genetics in a functional and attractive package.

Offered by the Rangeland Red stud, Marrakesh now holds the Australian record after being knocked down for a hefty $21,000 to the Mosely family of Etiwanda near Cobar.

Matt Wood of Rangeland Red stud said he has "got everything" and is a "very close to perfect buck".

"He has great numbers, all his weight gain and muscle performance data is all very strong and he is structurally correct," he said.

Megan Mosely of Etiwanda echoed Mr Wood saying he is a stylish young buck that is well-muscled with good structure.

"Based on the raw data provided and the visual appeal of this buck, we were keen to add him to the Etiwanda breeding group," she said.

"The Etiwanda team see a very exciting future for the goat industry."

At last year's inaugural event, the Mosely family also secured the high-seller which had then set the record at $9000. He was Rangeland Red tag 9094, and they currently have kids on the ground sired by him.

Attendees of the event were left in amazement as bids kept flowing, and the prices continued to rise throughout the draft.

In the black portion of the catalogue, three bucks sold for the top of $7000. These were Rangeland Red 20273 "Jamaica" purchased by Dusty Downs, Hermidale, Bunnaloo 201029 purchased by the Coddingtons of Gilgia, Guerie and Bunnaloo 201145 purchased by Justin and Julie McClure of Kallara Station, Tilpa.

The McClure duo were also the recent purchasers of the $12,000 record Red Boer buck, Youlden Valley Brock, and previous volume buyers out of the Cobar sale in 2020. This year they continued their investment in quality genetics purchasing nine bucks total at a $4556 average.

Nyngan buyers NJ and JA Baker through AuctionsPlus purchased 17 bucks at a $3529 average.

Also exceeding the previous $12,000 record for a buck, were two elite females that oozed quality and were described as the best black and best red does that the van Niekerk family of Bunnaloo stud has ever bred.

Black doe Bunnaloo 201003 was the first to reset the previous doe record as she was sold for $13,000 to Mark and Julie Cullinan and their sons Ben and Luke, of Kelleen Station, near Wentworth. They also purchased Bunnaloo's top-priced buck, Bunnaloo 201036, for $8500.

Just two lots later, the Bunnaloo 201046 red doe exceeded that benchmark selling for $13,500 to Mr Gates and setting a new Australian female record in the process.

As a volume buyer in the sale, Mr Gates purchased 14 does to average $5929 across the draft.

In all, the sale sparked interest with 4919 catalogue views on AuctionsPlus. It recorded 54 guest viewers and 111 registered buyers, of which 23 were active placing 621 bids online.

Online buyers through AuctionsPlus took home 56 lots, or 44 per cent, of the catalogue.

Both the Bunnaloo and Rangeland Red studs sincerely thank the buyers, underbidders and all that supported the sale in person or via AuctionsPlus.

The sale was conducted by Nutrien Russell, Cobar, with John Settree of Nutrien stud stock, Dubbo, taking bids as the auctioneer.

The story Buck sells for $21,000 as several records break during the Cobar Red and Black Goat Sale | Photos first appeared on The Land.