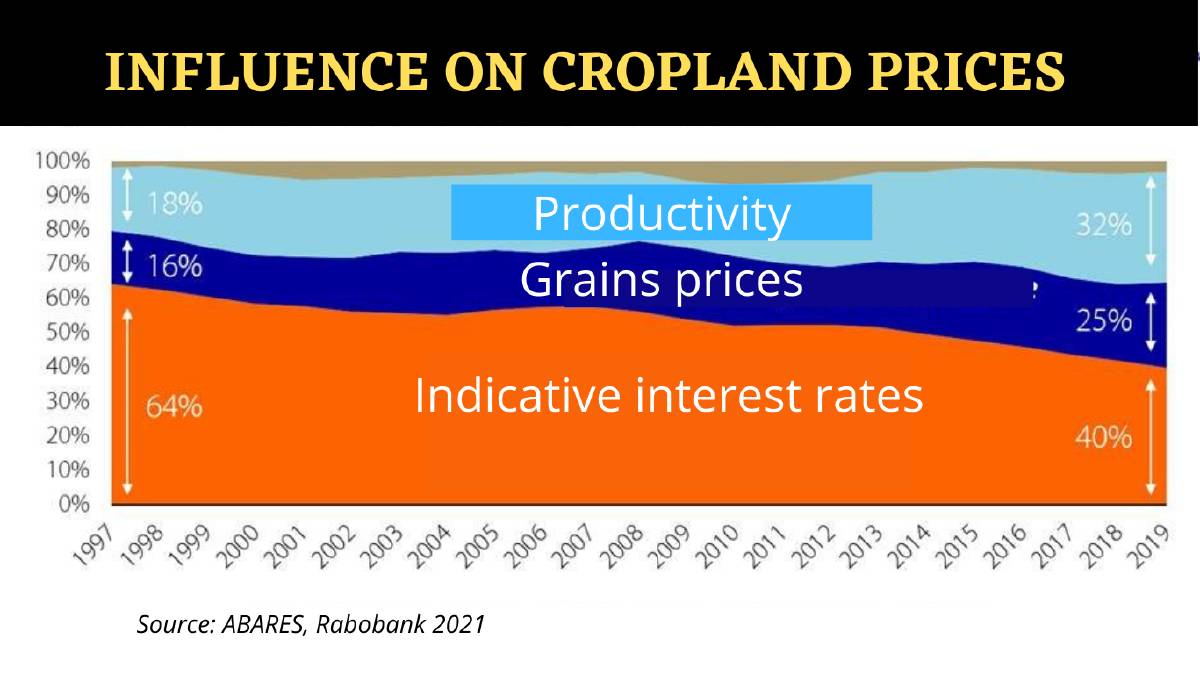 Interest rates are tipped to be on the rise in the next couple of years but experts say they will have less impact on farmland real estate than residential prices.

Interest rate rises would likely have less impact on farmland prices than in the past, Rabobank analysis shows.

While the Reserve Bank of Australia governor has tried to dampen market chatter about the likelihood of interest rate rises, banks have already begun to factor increases in, at least for the residential market.

"We see the RBA on hold until the first half of 2023, but fixed mortgage rates are already rising," an ANZ Bank report said this week.

At least two of the major banks, ANZ and the Commonwealth, are tipping house prices to fall in the next two years due to an forecast lift in interest rates and the affordability crunch.

Financial watchdog, the Australian Prudential Regulation Authority last month wrote to lenders, saying it expected them to lift the 'serviceability buffer' applied to home loans from 2.5 to 3 percentage points.

Banks add the buffer to current rates to test whether borrowers can service their mortgages if conditions change.

But there are some key differences between agriculture and residential real estate.

First, APRA said it has "no such plans" for farmland mortgages.

That could be partly because there has been less of a decoupling of agricultural incomes and farmland prices than there has between house prices and wages.

More than one in five new residential loans approved in the June quarter were more than six times the borrowers' annual income and APRA expected housing credit growth would continue to run ahead of household income growth.

The 2021 Australian Farmland Values report by Rural Bank showed commodity prices hadn't kept up with the growth in farmland prices since 2017.

Even so, the risk was lower in agriculture, Regional Investment Corporation chief executive Bruce King said, pointing to this year's beef, canola and grain prices and the income-earning value of farmland.

"I think that's being reflected in the underlying land price, so perhaps that decoupling isn't quite to the same extent or to the same consideration that you're looking at in a housing market sector where you're comparing wages which, while they'll influence what people are able to buy, are not necessarily an outcome or a byproduct of the underlying asset," Mr King said.

It's also much more difficult to assess how farm lending rates are changing. Not one of the big banks would say whether they were increasing rates on fixed mortgages.

On top of all that, interest rates were becoming less of a factor in farmers' land purchases, Rabobank senior analyst Wes Lefroy explained.

In 1997, interest rates had a 64 per cent bearing on the price of cropping land in 1997. By 2019, even though still the biggest factor, their importance dropped to about 40pc.

"I'd estimate that we'd need to see a couple of interest rate hikes or a 100 basis point increase before the market started to become sensitive to interest costs, just because interest is so low at the moment," Mr Lefroy said.

"If you look at interest as a percentage of total cash costs at a national level since the late 2000s, we actually have seen a decrease from about 12 per cent to about 8pc.

"So I do think there is a little bit of headroom before we start to see some sensitivity in the market."

The risk of a bubble was low and the long-term performance of agricultural land extremely strong, Mr Lefroy said.

"When we see downside, we only see very slight adjustments, so the up swings are generally much stronger than any slow downside correction," he said.

"Our outlook is still very positive for agricultural land, and particularly as an asset class.

"I think a lot of people take the long term view when they're looking at land and I don't think they would be deterred too much by the rising interest rate."