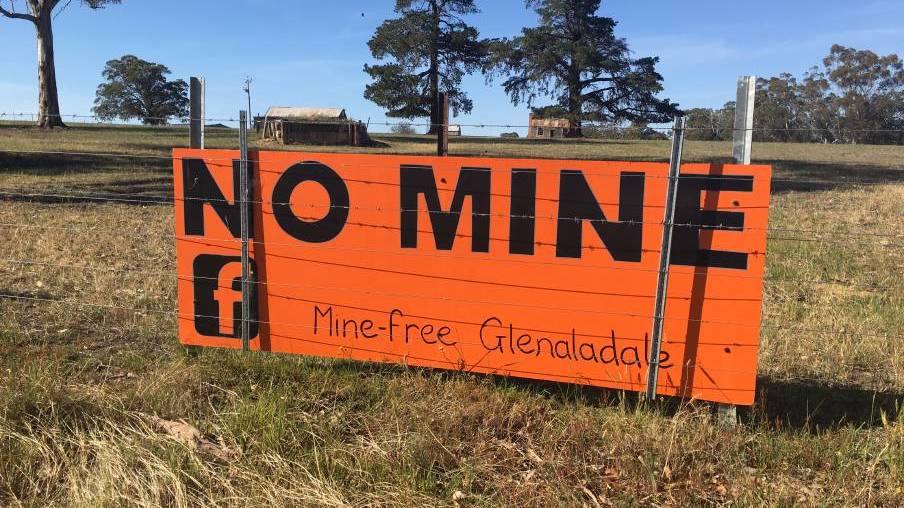 EASTERN VICTORIA: The proposed mine was set to be located at Glenaladale/Walpa along the Bairnsdale-Dargo Road in Victoria's east.

The mine's proposed site was located north-west of Bairnsdale.

A controversial application to establish a mineral sands mine in Victoria's east has been knocked back by the state's planning minister because of "unacceptable risks" it would pose to the environment.

The Fingerboards Mineral Sands Mine near Glenaladale, 35 kilometres north-west of Bairnsdale, will not proceed after Planning Minister Richard Wynne announced a permit would not be granted for the project on Wednesday.

"We owe it to the community and the environment to get this right and ensure only projects that adequately protect our environment go ahead," he said.

Mr Wynne said he accepted an independent advisory committee recommendation which said the project would significantly affect wildlife, vegetation, air quality, agriculture and horticulture if it went ahead.

The independent assessment also concluded the project would have posed significant risks to surface water downstream of the proposed mine.

The project's proponent, Kalbar Operations, had proposed to extract about 170 million tonnes of ore over a 20-year-period.

"The committee's review of the environment effects statement found this project would pose a significant risk to the environment and valuable horticulture industry," Mr Wynne said.

Local farmers, community groups and the East Gippsland Shire Council opposed the mine, despite Kalbar Operations indicating last year the project offered "many benefits" to East Gippsland and the EES "demonstrates that the project can be delivered with appropriate management of environmental impacts".

Kalbar Opertations said it was "very disappointed" with the minister's decision and would undertake a review of the ruling before deciding the next course of action.

Mine Free Glenaldale spokesperson Debbie Carruthers described the decision as a "huge win" for the community.

"We're absolutely over the moon," she said.

"It's been over seven years since Kalbar arrived at Glenaladale and told the landholders that they were going to be building a mine, and that was two weeks after the major fires that occurred at Glenaladale in 2014.

"This has been a long, hard-fought battle and the community is very grateful to the Andrews Labor Government for recognising that the environmental effects of Kalbar's proposed mineral sands mine are unacceptable."

Ms Carruthers said the decision would likely prevent the construction of any mine on the site in the future. PROTEST: Landowners across the district displayed similar signs on their gates opposing the project.

"Now that the minister for planning has said the environmental effects are unacceptable, we expect the other agencies such as the EPA and Earth Resources Regulation, will now also decline the application for the mining licence," she said.

Farmers say they are 'bloody fantastic' after hearing the decision

Woodglen horticulturalist John Hine, whose 200-hectare property is 400 metres from the proposed mine site, said the decision to shut down the project was a "win for East Gippsland".

"It's a massive decision for the whole community, the environment and the horticulture industry ... it's just huge and it's something that should never have happened in the first place.

"It's also a win for the tourism industry because it will keep the river and Gippsland Lakes system as clean as it is today."

Mr Hine's property on the Lindenow flats produces a range of produce including broccolini, broccoli, corn and lucerne primarily for dairy farmers.

"It would have been a disaster for us if it went ahead because we have high-quality assurance programs in place and any toxic materials that would have been detected on our produce would have had devastating consequences for our farming operation," he said.

Another farmer near the proposed mine site, who requested to remain anonymous, said he was "happy but weary" about the decision.

"It's been a hell of a battle, but I'm still worried about what could happen in the future," he said.

Kalbar Operations chief executive Jozsef Patarica said his thoughts were with the project's employees, families and supporters whose "future has been placed at risk due to the decision of the minister".

"We are very disappointed with the outcome as it is our strong view that the project provides significant benefits to the East Gippsland region, and one that would operate in harmony with the local people, natural environment, farming, water resources, and other industries," he said.

"It is unfortunate that when presented with the opportunity to protect and create jobs, the government has elected to hinder development of the mining industry in the state.

"The fact remains, mineral sands mining has enjoyed a long and proud history in this state, and demand for the commodities produced is only increasing as the world recovers from COVID and pursues a sustainable Energy Transition."

Mr Patarica said the company would undertake a review of the minister's decision before deciding the next course of action .

"With the region seeking to rebuild following bushfires and droughts as well as the closure of key industries including forestry and fisheries, the project would generate much needed regional development including short and long-term jobs for locals and providing significant opportunities for the area's businesses to support operations during the life of the project," he said.