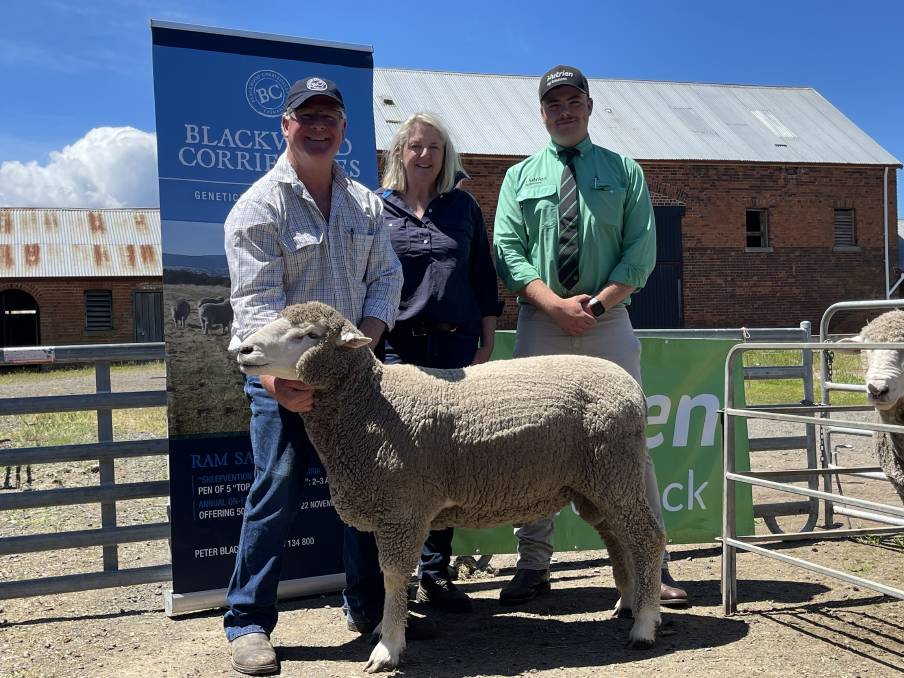 Peter and Claire Blackwood, Nutrien Livestock's Cooper Lamprey, and the sale topping ram, Blackwood 200158, in the top 1pc for MWP+ index, sold to $6400.

A rise in demand for the high performance rams at Tasmania's Blackwood Corriedale boosted the sale average by $400 year-on-year.

Tasmania's Blackwood Corriedale annual on property auction hit a sale high of $6400, as rising demand lifts the stud average by $400 to $2059.

The top priced ram was purchased by Gordon Last of Garvald Vale, Hamilton, who put together a consignment of 13 rams, for a draft average of $2861.

Other rams purchased by Garvald included Lot 45, a sire in the breed's top 5pc for MWP+ index, with 23.5 micron.

His brother is currently ranked number one in the breed and has been used as a ram lamb in the stud with 70 progeny on the ground.

Kinatura also purchased Lot 2, the junior champion Corriedale at Campbelltown Show this year, who recorded a MWP+ of 154.3 and 26.5micron fleece.

The grandsire of the two highest priced rams, Lot 1 and 3, was the top price Corriedale at Sheepvention, Hamilton, in 2017 at $6500, breaking a 20 year sale record for the breed.

More than 50pc of the rams sold at the auction were in the breed's top 10pc for performance in both Australia and New Zealand. Out of 52 rams sold, 35 went to Western District properties.

"We achieve genetic gains by using our best ram lambs and by selecting for it.

"We do a lot of recording from the day of birth onward so we can identify the top performing animals."