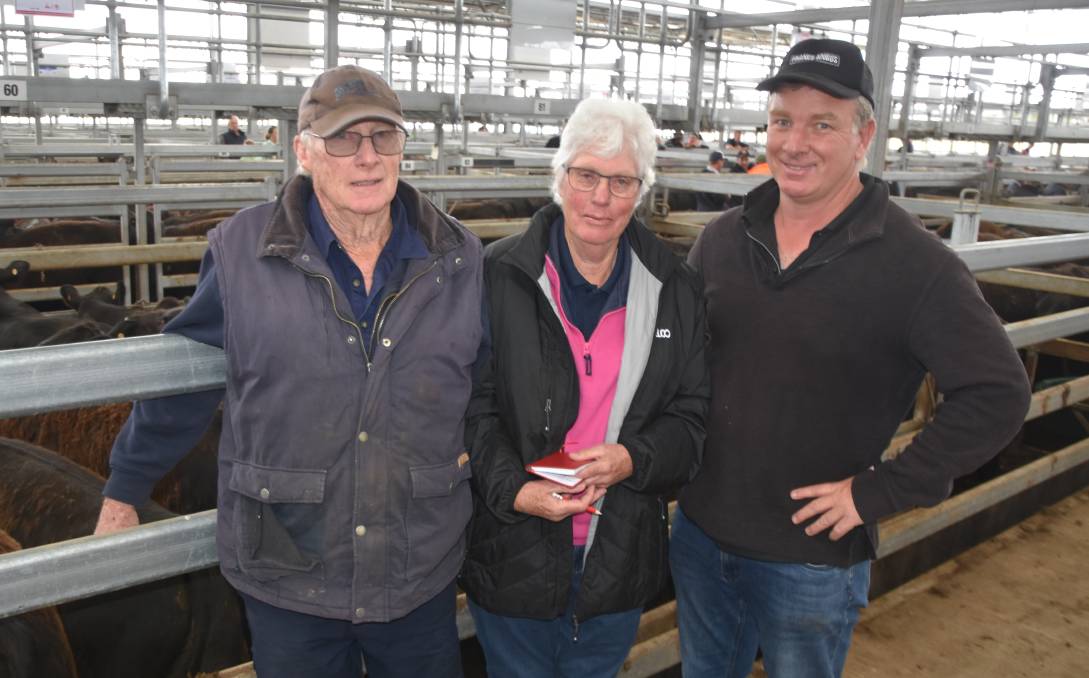 Mick and Dawn Ernest said they never expected to receive prices like this.

Soaring cattle prices are showing no signs of easing in Victoria after nine and 10-month-old Angus calves sold beyond $2500 a head to restockers at Ballarat.

Their steer calves sold to $2550, while their sisters sold for only a fraction less, topping the market at $2510.

It comes as the Eastern Young Cattle Indicator on Wednesday dropped slightly to sit at 1104.06c/kg carcase weight, after reaching a new peak of 1105.47c/kg earlier in the week.

The Ernests, who prefer to shun the spotlight, said the record prices were a result of their long-term bloodline and buyers who returned each year to bid on the reputable line of cattle.

"We never expected to get that sort of money," a modest Mrs Ernest said.

The couple run 300 Angus breeders and eight bulls at Streatham, and in the last 40 years have bought more than 100 bulls from the Franc family of Francs Angus at Beaufort.

"We put it down to genetics and this year we just lucked out with the feed situation," Mr Ernest said.

"We could not have asked for a better year with the early autumn break."

Elders Ballarat auctioneer Graeme Nicholson said the reason the cattle were in such high demand was because of how the Ernests bred their cattle.

"I've been in this game for nearly 50 years and I have never had a better line of cattle in my career," Mr Nicholson said.

"They are just wonderful people to deal with and the cattle are easy to handle".

Albury, NSW-based commission buyer Duncan Brown said large parts of NSW were in a "transition period" after rain, but noted the demand for cattle to head north was still strong.

"Demand hasn't softened but it's that wet at the moment around the central-west and Coonamble areas, farmers are more worried about the harvest than buying livestock to be honest," Mr Brown said.

He said farmers further east were still enjoying relatively good seasonal conditions, and were particularly interested about the rates of young female cattle.

"I think that's where interest is going to be out of the north for the next couple of months because the market is so dear and we can't all buy steers," he said.

"I never, ever thought I'd see lightweight steer calves make $2000 in my life and so did many other people and that's why there's a focus on heifers for breeding."

Thomas Elder Markets analyst Matt Dalgliesh said there were a number of factors driving the buoyancy.

"We did see tightening of supply in NSW and Queensland on the back of the rainfall and that could have prompted a search further south," he said.

Meat & Livestock Australia data shows November trade steer prices year-on-year are up 29 per cent in Victoria, while vealer steers are up 37pc and restocker steers have jumped 33pc.