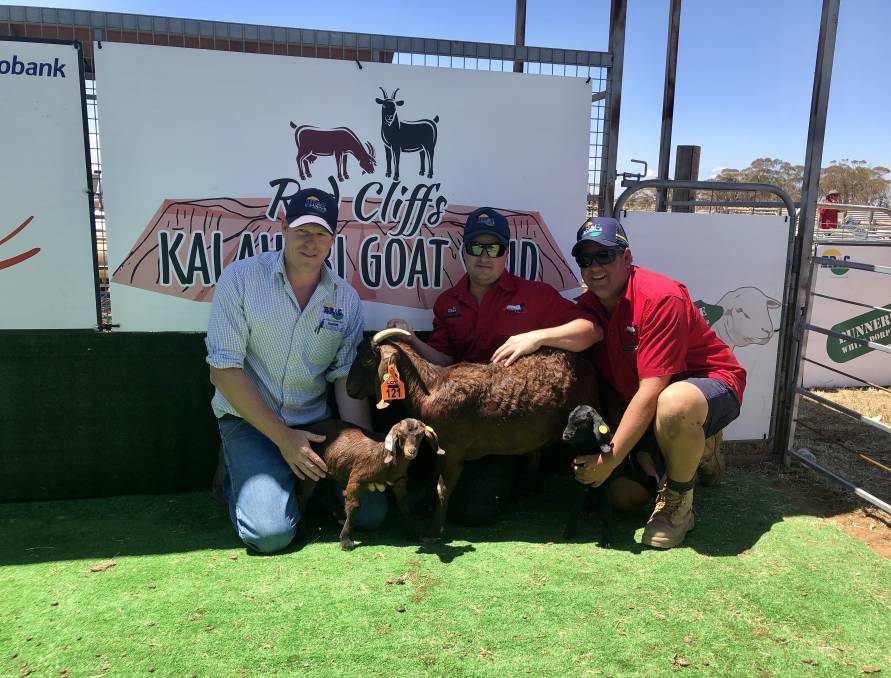 A Kalahari Red doe has set a new Australian record selling for $9600.

Found among the offering at the inaugural Red Cliffs Kalahari Red Goat on-farm sale held at Mildura, Vic on November 5, the October 2019-drop doe was one of 20 does and 20 bucks sold.

The full clearance was welcomed by vendors Mikeal Freckleton and Michael Gathercole who own the Red Cliffs stud in partnership.

The Kalahari Red doe reached the sale top price of $9600 and broke records along the way, as she was snapped up by an undisclosed buyer at Ouyen, Vic.

She was the pure full blood, Red Cliffs tag 95, which sold with two kids; a red buck and a red doe.

Weighing 64 kilograms, she was sired by Jolleen F N76 'Jacob' and out of Salette Andrea with her kids sired by Salette Conor.

Mr Freckleton said she was a female that stood out for her large frame and good colouring, and she was fertile always having twins.

"Kalahari is the flavour of the month, and it is a good time to be involved with them and the goat industry," he said. "We have had them for a while [5-6 years], and we are lucky enough to have big numbers to be able to move a few and give people the opportunity to get good genetics."

Demand for Kalahari Red does was evident with all 20 does sold averaged $4305.

Does sold throughout Victoria, NSW and South Australia, with Mr Gathercole saying a good amount went to a pastoral farm west of Ouyen, Vic, and Ki Downs Station, Euston.