One buyer travelled from Gippsland and was among the volume purchasers. 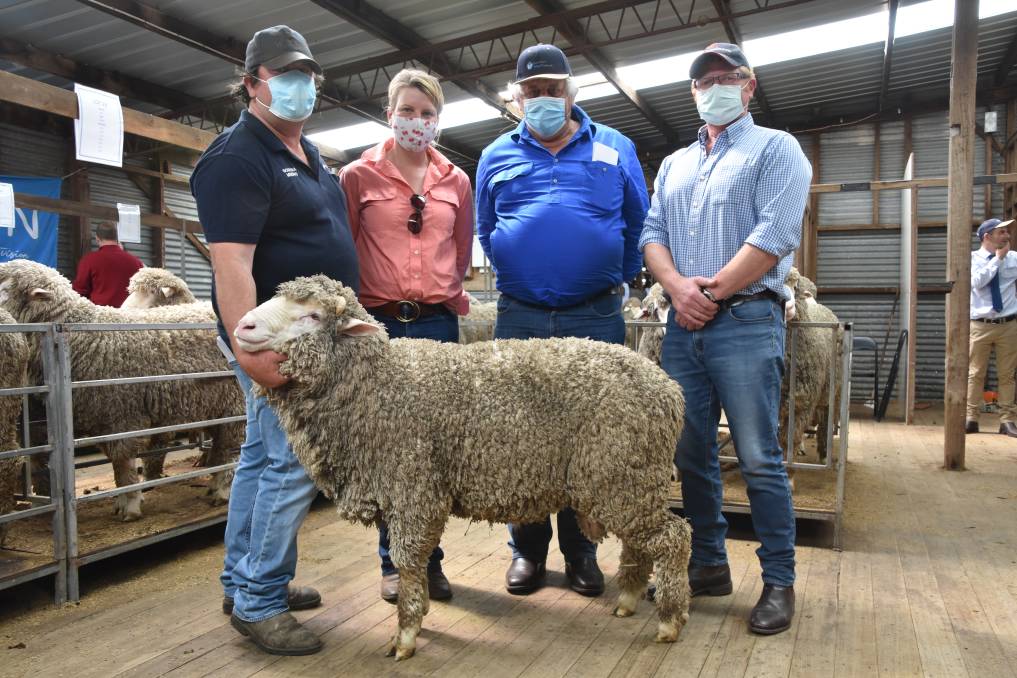 Buyers travelled close to six hours to get their hands on Boorana Merinos' progeny during the Glenthompson stud's seventh on-property ram sale on Wednesday.

Not only did a handful of volume and repeat buyers return to the stud for its annual sale, several new clients walked away with Poll Merino rams in a sign of confidence for the Lynch family.

Boorana Merinos stud principals Will and Anita Lynch said they were rapt with the clearance and demand for their rams.

"We're absolutely ecstatic because the sale was better than I dreamed it to be," Mr Lynch said.

"The average was $600 higher, we sold another 10 rams compared to last year and we picked up probably five or six new clients and that's more than any vendor could hope.

"Buyers seem to be very happy with the progeny they're getting and we're all about getting rams out there and working."

Perfect seasonal conditions helped the rams in the lead up to the spring sale, Mr Lynch said, with a majority of buyers travelling from within a 100-kilometre radius of the stud's property.

The top-priced ram, Lot 38, went under the hammer for $4600 to former top-priced buyers Peter and Val Tischler, Tarraleah, Edenhope.

Mr Tischler, who was at the sale with his daughter Anne, bought six rams in total including their second top-priced ram for $3200.

"The attributes about the top ram himself is that he's a lovely, big-bodied ram plus he's got a lot of wool on him as well."

"He's only a young ram and he's barely got his teeth up but he's a good doer and has excellent structure," he said.

"This is the seventh time we've bought from Boorana and we run a mixed farming operation where we breed Merinos, first-cross ewes and we breed fat lambs and do some cropping and run cattle as well."

Mr Tischler said the top-priced ram would be joined to some of his three-year-old Merino ewes.

"We've had a tough start and our winter was pretty cold, especially July, but we're a long way from our season finishing and the crops look good so that is very pleasing," he said.

Among the volume buyers were second-time purchasers, Craig and Andrea Bush, who travelled from the small Gippsland community of Meerlieu, near Sale.

Grampians Farm Holding, Cavendish, bought eight rams at the sale to a top price of $3000 for Lot 55 and a second top-priced pen of $2600.

AWN livestock manager Ron Creek, Bendigo, said the sale was underpinned by "tremendous" support from both local and return clients.

"The thing that stands these sheep in great stead is that they're early maturing, they're fast growing and they are a beautiful free-growing wool type," Mr Creek said.

"Those who are chasing a six or eight month shearing program look at these types of wools very favourably.

"There was also eight new registrations for buyers today and that's testament to not only where the stud is at, but where it's going to."