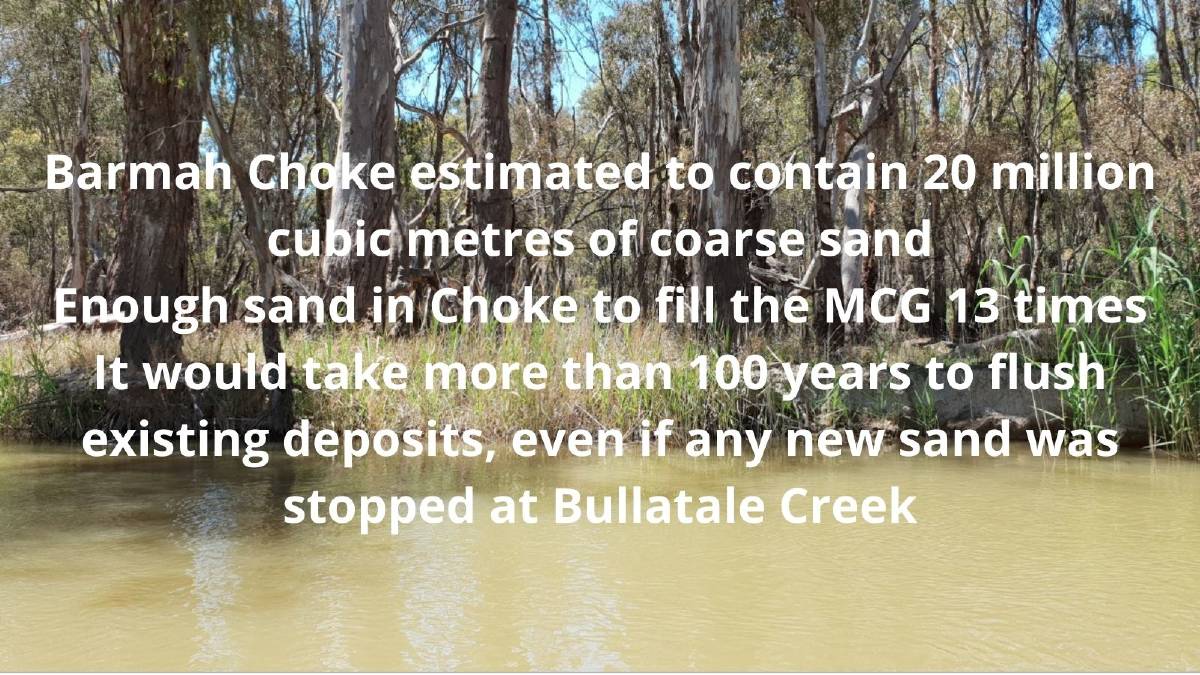 CHOKE PLANS: The Murray Darling Basin Authority says it should be able to release is recommendations for the Barmah Choke by the end of the year.

MDBA says over the last year, its gained a much better understanding about what was happening at the Barmah Choke.

The Murray-Darling Basin Authority is likely to recommend a multi-pronged approach, including dredging, to improve water flow through the Barmah Choke.

The Choke is a narrow section of the Murray River that runs through the Barmah-Millewa Forest, restricting flow to about 7000 megalitres a day.

In a series of community presentations to residents along the river, the MDBA has suggested that dredging and moving water around the Choke, through existing infrastructure, could be part of the solution to overcome a sand slug on the river bed.

Murray Valley Private Diverters spokeswoman Sally Dye said it was likely there would be a multi-pronged approach, with dredging as part of the solution.

MVPD represents private river pumpers in the NSW Murray Valley and its tributaries, including the Edward, Wakool, Niemur Rivers, and other creeks and streams.

"I believe there has been a reluctance to look at dredging, as an option, because of the potential environmental damage," Ms Dyer said.

Earlier this year, the MDBA released research that revealed it believed a major cause of decreasing capacity in the Barmah Choke was a massive sand slug, mobilised mainly by land use and mining change in the 1800s.

Ms Dye said the MDBA had 'come to realise' dredging was one of several solutions.

"It's necessary because the cod holes in the river have all filled up with sand, so the habitat for the fish, the logs and eveyrthing else, have disappeared."

She said the volumes of water required to bypass the Choke meant that that was not feasible.

"If they don't dredge and bypass the Choke, because of the velocity of the water downstream from where any bypass offtake was, all the sand will keep building up, so it exacerbates the problem."

She dismissed the argument that vegetation on the river banks would be damaged if dredges were used.

"You have to look at long term solutions, and the reality is Redgum forests regenerate at an astonishing pace, once they have water.

She said any business case could explore the potential for the sale of sand recovered by dredging, to help fund environmental programs.

"It's a commercially viable product, there are a lot of sandminers around, who would be pretty happy to get their hands on that quality of sand, I would think."

Goulburn River beef producer Jan Beer said she was glad the MDBA realised it couldn't flush the sand through the system by pushing more water down the river.

"I thought maybe that was their excuse for getting 80,000 megalitres a day to the SA border.

"So if they say they can't flush the sand out at the Choke, doesn't that make a mockery of their policy of flushing sand out the mouth of the Murray?"

"The Yea River, which to my knowledge has had no mining history upstream, brings down substantial quantities of sand, which have to be regularly dredged at the Yea township offtake.

"Has anyone ever brought up that nature evolves, river systems regularly change direction over the years for many different reasons, but man's intervention to attempt to harness and manipulate the rivers for their purpose is a constant fight against nature?

She said the Basin Plan and MDBA policies had brought trade and environmental policies into play that demanded excessive amounts of water be delivered downstream on the Murray.

Wakool Rivers Association chair John Lolicato said removing the sand slug would not make any difference to the problems on the Goulburn and Edwards Rivers or downstream of Torrumbarry.

"Can you imagine the turbidity, if they go and dredge the bottom of the river?" Mr Lolicato said.

"It will just be horrendous for those downstream for years to come.

"This wasn't a problem until the Basin plan came along."

He said the requirement to get more water downstream regularly was the real cause of the problem.

"What has changed is the times, and the volume and velocity, of the water required."

He said the targets set under the Basin Plan had not been met.

"NSW and Victoria have requested a look at the modelling, but the other states rejected it."

"We are fighting against nature, we are trying to make the system do something it can't."

He said downstream water users should be seen as 'second class' irrigators to ease pressure on the system.

"Don't try and shut down all the stuff upstream, stop encouraging development downstream on country that should not ever have been irrigated."

MDBA River Management director Ben Dyer said over the last year, the organisation had gained a much better understanding about why the capacity was reducing, how the sand slug developed, how it was moving, and the impact it was having on the Barmah-Millewa Forest.

"This is a very slow, incremental change that is now affecting the health of the river, the forest and the ability to get water downstream," Dr Dyer said.

"If we do nothing to manage the sand this damage will continue.

"When we measured the depth of sand on the riverbed between Yarrawonga and Barmah we found that there is more than 20 million cubic metres of coarse sand in this reach - enough to fill the Melbourne Cricket Ground 13 times."

He said there was no single solution.

"Later this year we'll submit findings and options, clarified with the assistance of community representatives, to the Basin governments and recommend that we progress to an options-development stage.

"The volume of water delivered through the Barmah Choke has not increased - it can't because there's a restriction on trade that's been in place since 2014.

"Every year since that has been in force there has been a net upstream trade of water."