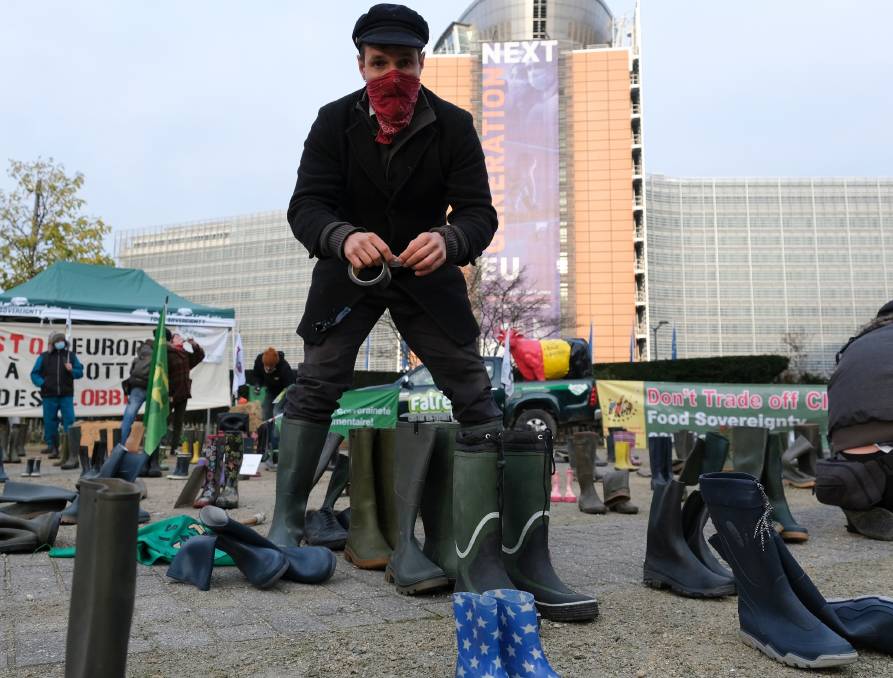 Environmental activist protests against the European Agricultural Policy in front of the EU Council headquarters in Brussels. Picture: Shutterstock

Green activists have stepped up their attack on the farming sector for calling for a comprehensive impact assessment of F2F.

AS the crunch-time vote in Plenary approaches for the EU Green Deal Farm to Fork Strategy (F2F), green activists have stepped up their attack on the farming sector for having the temerity to call for a comprehensive impact assessment of F2F on EU farmers and the European agribusiness sector.

To recap, the EU adopted its Green Deal in 2019 as the roadmap for implementation of the United Nation's 2030 Agenda and Sustainable Development Goals.

From the other side of the world that might seem vague and of questionable relevance to Australia but the reality is that there will be significant implications within Europe for agricultural production, commodity prices, impact on farmers, cost to the consumer and effect on EU trade policy.

Since presenting F2F in May 2020, the European Commission has been seen by the farming sector as reticent in acknowledging the significant blind spots and trade-offs involved in the strategy.

Through its in-house Joint Research Centre, the EC did conduct a study which was ready to be published in January, 2021 but subsequently not released until August.

According to Euractiv (a pan-European media network specialising in EU affairs), agricultural stakeholders accused the Commission of deliberately attempting to bury the report in the quiet, midsummer period when everyone is on holidays because of its controversial findings in relation to the EU's flagship food policy.

Up to this point the only study on the issue was one carried out by USDA's Foreign Agricultural Service released in November 2020.

Subsequently there have been other reports prepared by Kiel University and Wageningen University.

Across these various studies, which each used different methodologies, the conclusions were essentially the same: EU agricultural production will decrease, quite drastically in some areas and for some products. There would also be impacts on trade, on farmers' incomes and consumer prices and potentially as many as 22 million people being subject to food insecurity.

Convinced that the EC is not focused enough on the cumulative reality of what the various studies are suggesting, Copa Cogeca (the united voice of farmers and agri-cooperatives in the EU) led a combined call last week from 27 industry organisations for the EC to "listen to what the data says".

The signatories to the joint declaration said, "We are all committed to playing our part in the fight to mitigate the negative effects of climate change. European agricultural production is among the most resource and environmentally friendly production in the world. Nevertheless, European producers believe that with innovation and relevant support at the core of EU agricultural policy, farmers will continue to produce in an even more sustainable manner. We acknowledge society's and policy-makers' expectations in the realm of food production. However, a non-data based, political target will have deleterious effects on European agriculture. We must build solution-oriented policies based on the data we have to hand, with innovation being their cornerstone."

But the call to reason by the farming sector has not gone down well with the green movement.

CEO describes the 27 signatories to the joint declaration as "an unholy alliance of farmers' representatives with agricultural tech and chemicals lobbies and industrial livestock industry lobbies".

In regard to the joint declaration and its reference to the findings of the various studies on the impact of the F2F strategies, CEO said, "At a time when climate change and biodiversity decline confront us with the greatest global and existential threat, and the agriculture sector has a major role in these crises, this deliberate misrepresentation of the impacts of the Farm to Fork strategy does a great disservice to society at large."

In response to the CEO claims, Copa Cogeca said it considers there is nothing problematic within the leaked document as it is part of a normal advocacy strategy that all interest groups can prepare at EU level.

"We are well aware that this leak is a deliberate attempt to trigger a media backlash just as we start speaking of the potential impacts of the Farm to Fork strategy for the first time. The current discussion shows the desperate need for public data on the subject."

Some optimism for lean-beef exports next year

STEINER'S latest weekly market analysis contains some optimism for imported lean beef into the US next year.

Outlook for strong growth in the US economy in 2022 underpins the expected increase in demand for lean grinding beef while domestic supplies of lean cow meat are expected to decline.

Coupled with this is the supply price relationship between ground beef and chicken.

This time last year fast-food chains were able to source chicken breast for around US90 cents per pound while today the price has more than doubled.

Consequently the ratio of 75CL beef to boneless/skinless chicken breast is at the lowest point since 2014.

Drought and lower dairy prices have resulted in higher slaughter rates this year for both beef and dairy cows.

This herd liquidation has bolstered cow-meat supplies in the near term and kept lean-beef prices in check but will likely cause a decline in cow slaughter over the next two years.

At home meanwhile grid rates have turned north in the hope of keeping kill schedules as full as possible in the remaining weeks of the year.