There was almost half the amount of cattle offered at Pakenham on Thursday as there was a fortnight ago. 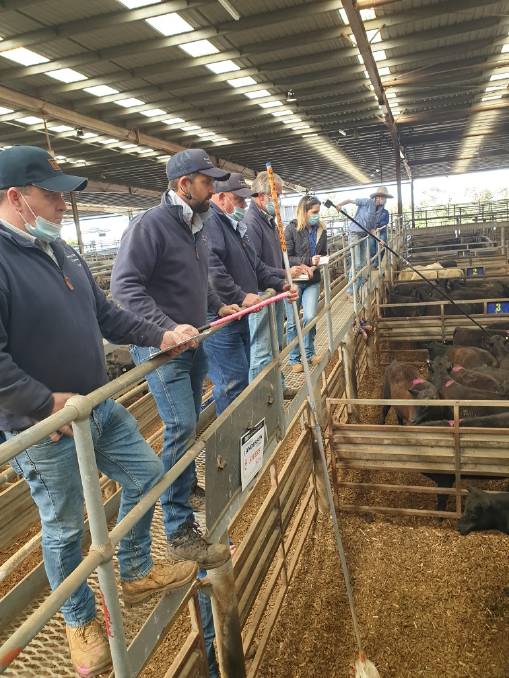 The Everitt, Seeley and Bennetts team up on the rails at Thursday's Pakenham store sale.

There was almost half the amount of cattle offered at Pakenham on Thursday as there was a fortnight ago, but that only fired up buyers to secure as much of the yarding as they could.

The yarding consisted of about 1550 steers, heifers and cows and calves, and according to Alex Scott & Staff Pakenham livestock manager David Setches, that was 1200-1300 less than the last sale.

Mr Setches admitted he wasn't entirely sure what influenced the reduced yarding, but he suspected it was something to do with the rain and market.

"We've had a bit of rain, and given our season so far, people might have opted to get a bit more weight into their calves, hence why fewer came forward," he said.

He said the reduced offering consisted of mixed-quality cattle, and there were fewer heavier cattle in the 450-600-kilogram range, but neither of those factors did anything to reduce competition.

He said the best of the lightweight Angus steers weighing between 250-280kg made to 470 cents a kilogram, while Angus heifers in a similar weight range made to 650c/kg.

Anything that was well bred was snapped up eagerly, he said.

"Because there were a few crossbred cattle and a lack of quality, anything that was well bred made up to firm on last sale, to maybe a few cents cheaper," he said.

In what Mr Setches believed was a record for Pakenham, a draft of 6x6 Charolais heifers with 3-4-week-old calves at foot topped the market at $5350 a unit.

The draft of heifers, which weren't rejoined, was consigned by D&E Perczyk, Hallston.

He said the best of the Angus heifers and calves was from D&R Scott, Stony Creek, who sold 9x9 at $4550.

The Speckle Park calves were 3-4-weeks-old.

Mr Setches said feedlots were buying but they weren't as active as a fortnight ago.

He said that was probably due to the quality and weight, which "didn't quite suit them".

"But there were quite a few agents and restockers here, trying to find the lighter cattle that were under feedlot weight, and they were pretty strong on the better lines," he said.

"I think [a big reason behind the reduced yarding] was price, every agent has been saying it for some time, it's driven cattle out of the market over winter," Mr Robertson said.

"I do think we're starting to run out of cattle - big lines of cattle at least.

"Later in spring and leading into the new year is when your big drafts of weaner calves come forward, so it's still a bit early to tap into those autumn-born calves.

"So we'll just have to ride the wave the next couple of weeks and more will come on[to the market] soon."

He described the sale as very good across the board.

"Our better-end cattle, a few pens of feedlot steers in between 420-460kg, really required close to 600c/kg to buy them and little more in some areas," he said.

"Which is just as good, if not better, than recent weeks."

He said the mixed-quality yarding gave restockers a chance to get more active in a previously feedlot-dominated market.

"Graziers haven't been able to get into the well-bred, black cattle because they're competing with feedlot buyers, so they've had to look at the next tier down of cattle, the crossbred steers, which there was plenty of at this market," he said.

One of his stand-out lines was from Labrador Pastoral, Cape Schanck, who had two pens of Angus steers.

In terms of what was to come, Mr Setches felt optimistic.

"Traditionally we'll start to see the first drafts of people's calves coming up to Christmas and into January when the weaner sales start, and I've got the feeling that with the season that's in front of us and the supply and demand issue that we're having at the moment with a shortage of cattle, I'm sure it's going to stay strong all the way through," he said.