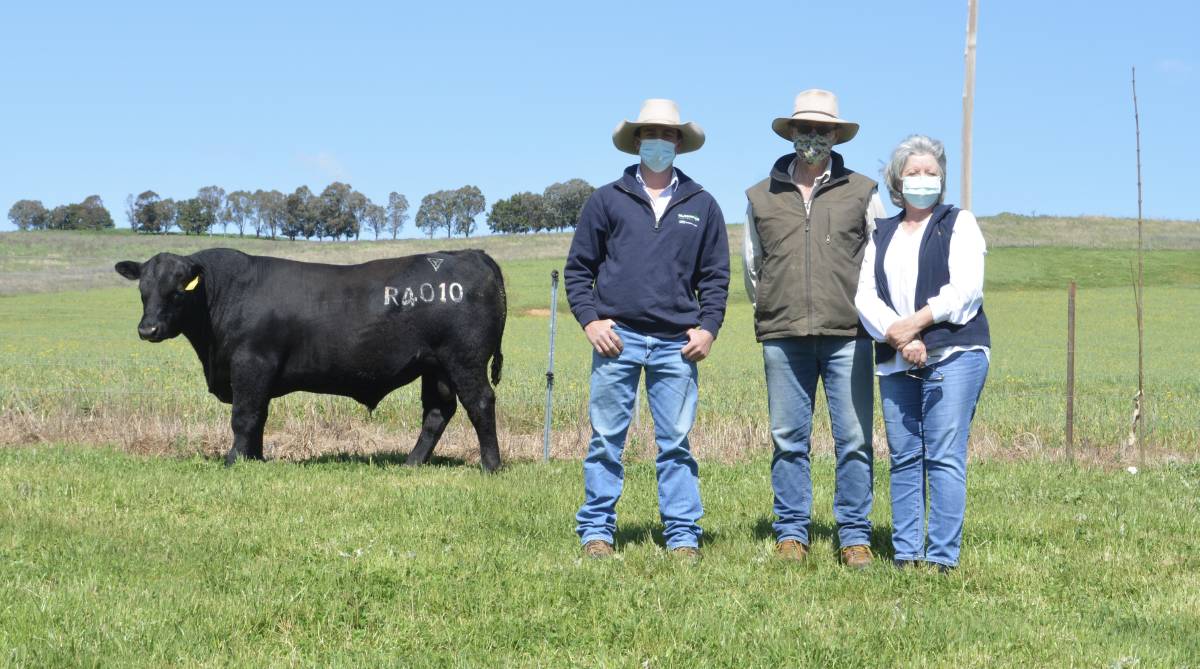 Seedstock producers have a spring in their step with this season's bull price average nearly double year-ago levels. There is a spring in the step of southern stud principals thanks to a 19 per cent jump year-on-year in the value of Victorian bull sales held in 2021.

The returns follow the bull price spike received in September, which averaged $11,378 - a rise of 48pc year-on-year - while in August, AuctionsPlus Victorian bull sales averaged 30pc higher than the corresponding period at $13,293.

This month, bull sales increased an astonishing 98pc on the same period last year for the average price paid at Victorian bull sales in October, at $8598.

Victorian seedstock producers say the boost to bull prices was in line with the cattle market's dramatic climb.

Banquet Angus partner Stephen Branson, Mortlake, said commercial beef producers were getting value when working on a 4.5 steers to one bull ratio, when beef prices were up to 700 cents a kilogram carcase weight.

Mr Branson said the top-end commercial breeder, who valued their cows and replacement heifers, was paying up to 10 heavy steers, or about $20,000-$30,000 for the better bulls.

He said breeders, both stud and commercial, were receiving record prices for their product after enduring a tough few years maintaining their breeding herd and young stock.

"The current increases are a payback for the difficult times the industry has experienced and debt is now being paid off," he said.

"If you are retaining your females in your program, then you benefit from the accumulative improvement that the power of superior genetics contributes."

"I'm cynical with the high prices because the quality of the genetics aren't always there," Mr Lawson said.

"We focus on that accumulative genetic gain, year-in-year-out, making sure we have productivity gains in future generations of cattle, not selling bulls for high prices.

"There is a fixation in this industry for growth but productivity doesn't just mean growth.

"Discerning farmers can make really good gains with a $10,000 bull, if they do their homework, and be better off spending additional money in other parts of their business."

With the improved returns, Mr Lawson was focusing on reinvesting in genetics, improving infrastructure, reducing debt and drought-proofing the family's Yea and NSW properties.

"We have battled bushfires, drought and bad prices - this is a really good time and important to show our kids what a good cycle means so we can keep them interested," he said.

"In my 25 years of farming it is the first time it has been so good from a financial point of view.

"What is really important is that our next generation see that financial reward and encourage them to stay in the industry - that's what I am most excited about."

AuctionsPlus chief economist Tim McRae said given the entire cattle market was up 30-40pc year-on-year, the higher bull sale results were a "financial vote of confidence" heading into 2022.

"The higher returns that commercial producers have been receiving now for almost 21 months has enabled increased spending upon genetics - which we have seen through the pregnancy-tested-in-calf categories as well," he said.

"Preliminary results from AuctionsPlus for the most recent quarter shows that average prices for the eight main breeds traded on through AuctionsPlus are all up by similar percentages year-on-year.

"We have seen some volatility in the clearance rate for PTIC assessed cattle - with this largely due to the difference between reserve levels placed by vendors and price limits from buyers."