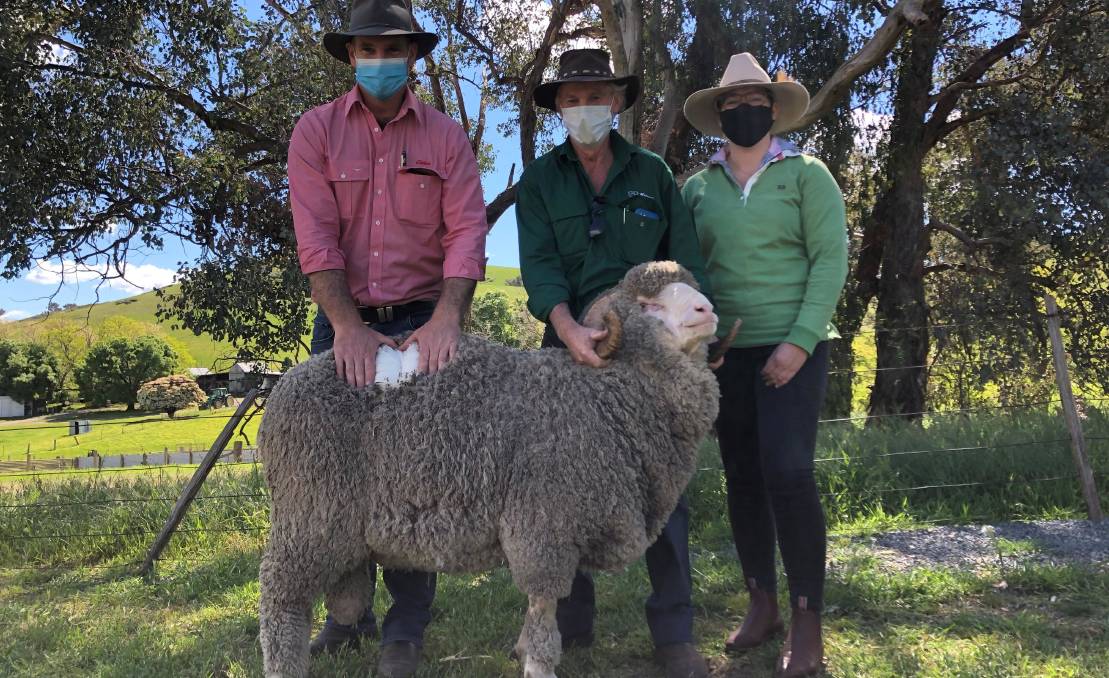 A STUD record top price of $5600 was paid by clients of Kilfeera Park Merinos who looked at Australian Sheep Breeding Values to hit the wool market's "sweet spot".

"We broke last year's record for top price and it is definitely our best average, so we are very pleased," Mr McKenzie said.

"They are a very even group of rams in both size and quality."

He said the offering included 13 poll rams and 37 horned rams, with growing interest in the poll offering which had been introduced for the past five years.

The second top priced ram at the sale made $5000, which was purchased through Elders, for a NSW client, for Lot 5.

Of the 37 horned rams on offer, 14 were sired by 'Woody', Elders district wool manager Rex Bennett said was growing to be a super sire within the stud, injecting attractive wool qualities to the stud flock.

"RP Woody is a great sire that is leaving his mark on the Kilfeera sheep with good growth, crimpy wool that stands up to high rainfall and is an all round productive sheep," Mr Bennett said.

He said market prices were influencing the buying dynamics and decisions of clients, with more growers looking at the ASBVs for fleece data to asses true micron predictability rather than micron actuals.

With the difference of nearly 700 cents a kilogram between 20-micron (1332c/kg) and 18-micron (2095c/kg) wool at Melbourne sales this week, he said micron was an important selection criteria, alongside "make and shape".

"With the ASBV fibre diameter - a true predictability of how a ram would perform - Kilfeera were above the industry average for the majority of their offering, with many in that 18-19-micron sweet spot," he said.

Sponsored by
COMMENT: Imagine the frustration if we couldn't get emails on our phone or tablet.
Test
Chance to dabble in on-farm tech at research farm.
Test
Plant-based proteins are no vegan fad, says v2foods.
Test
The 8000 ewes were bought by clients in NSW, Qld and Tasmania.
Test
The agreement is expected to provide the group with national distribution.
Test
High rainfall, damaging winds and potentially large hailstones expected throughout parts of the nation.
Test
Heavy cattle ease at Colac but lighter stock still selling strongly.
Test
Trade anticipates calm conditions for wool leading into the Christmas recess.
Test