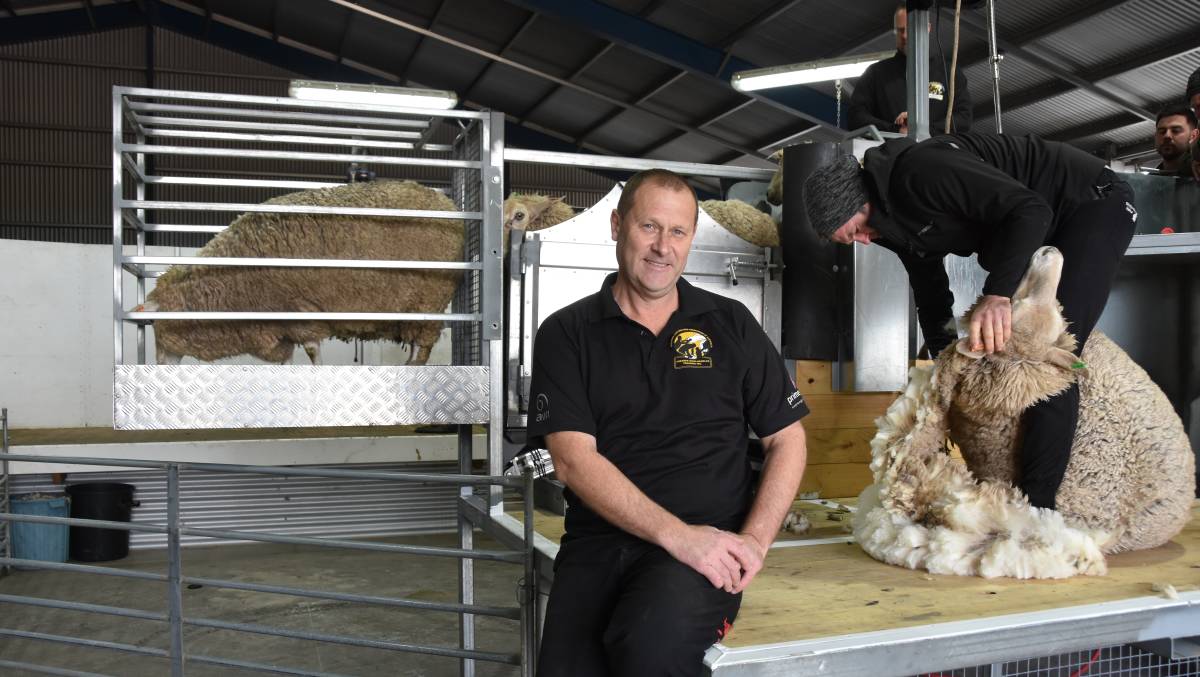 SA INNOVATION: Shearing Contractors Association of Australia shearer and wool handling training executive officer Glenn Haynes and trainer Paul Oster were testing the automated delivery race they have been working on at a shed near Naracoorte this week.

World-first prototype aims to eliminate dragging the sheep from the catching pen.

Shearing can be a back breaking job but a world-first prototype being designed and trialled in SA aims to eliminate one of the toughest physical elements - dragging the sheep from the catching pen.

The Automatic Shearing Delivery Race delivers the sheep to the shearer and automatically tips it into position.

It is hoped there will be less chance of injuries and less stress on the sheep as the shearers are not continually entering the catching pen and wrestling sheep out.

"We have been working with a lot of farmers as well as they are in the ones that will be purchasing the unit," Mr Haynes said.

"We have also been working a lot with Wayne Hosie from NSW and the Victorians working in shearer and wool handling training to make sure the other states are having feedback about it because every state has little differences in their shed design or the type of the sheep.

"We get a lot of big first-cross ewes down here that they don't have at Broken Hill (NSW), we need it to be able to handle them all."

Mr Haynes sees doing away with the "catch and drag" process as critical to prolonging the careers of shearers, especially as sheep get larger.

About 75 per cent of all injuries occur while shearers are getting the sheep from the pen to the down tube, he said.

He sees it will particularly benefit female shearers, who make up 40 per cent of all shearing school attendees.

"The majority of the women are amazing but it is hard on them to get that sheep out, a lot of the young guys are the same, they just don't have the core strength," he said.

"And for the older guys, instead of those in their 50s thinking I need to get out by a certain time this might keep them shearing for another five or 10 years or more."

Australia, New Zealand and South Africa are among the few countries that still drag sheep from a pen to be shorn with most European countries and the United States advancing to shearing trailers.

Mr Haynes does not see these as a viable option for harvesting Australia's wool clip.

"In those countries they don't have so much Merino wool so they don't care about the clip preparation so much and they have smaller flocks, they might only have 100 to shear and then move on," he said.

"A lot of those trailers they throw the sheep over the front of the board so the sheep jumps out between the roustabouts who are out the front.

"We look at that as an occupational health and safety issue and not only that they (the sheep) take the wool with them." AUTOMATIC DELIVERY: Shearer Paul Oster grabs the sheep after it is tipped into position by the race delivery unit ready to start shearing. The prototype eliminates the need to drag sheep from the catching pen to the board.

Mr Haynes says the delivery units will be able to fit together to make a multi-stand shearing platform, which can be assembled as a straight board or a U-shaped configuration.

"Some of the bigger properties which might have two to three sheds would only need one lot of these and can pick them up with the forks onto a truck and move them to the next shed," he said.

"The farmer also doesn't have to have a builder there for months fitting out a shed either so if they have an empty shed that is cemented, they can push these to the back of the shed and an hour after the truck has rocked up they can be into it (shearing)."

Mr Haynes estimates the delivery races will be about $18,000 per unit but including the pneumatics that automate the tilting process it was likely to be about $25,000.

"We took it to trial it at a four stand shed that is only two years old out at Kybybolite, we did the sums with the farmer and he worked out that he could of saved himself $80,000 by buying four of these and not having to build the catching pens, all the forcing pens, the stumping and grading," he said.

Mr Warnest believes shearers will be able to shear at least the same number and likely more than if they were dragging the sheep out of the pen but exert far less energy.

"You might walk off the board at the end of the day with a high tally and not be so buggered," he said.

"For some of those shearers that just want to shear locally and do the spring having this it might be a lot easier coming back onto the boards- that first week back can really hurt."

Mr Warnest said there was still a "way to go" in fine tuning the race delivery design but he encouraged people to be open minded with its range of uses.

"Maybe we will see an eight stander (eight modular units) on a truck and you just drive that truck onto someone's farm," he said.

"When it is on the back of a truck all of a sudden you have options like climate control too."

AWI general manager, grower services Stephen Feighan said there had already been strong interest from woolgrowers and anticipates the units could be commercialised next year.

The next step is to build a second unit and then trial both units together.

"We need to test how they hold up to wear and tear in a shed," he said.

Mr Feighan said the project's progress was a great example of what could be achieved enlisting "practical people" who have experience shearing around the world.

"Woolgrowers pay per sheep so we are not looking for speed but the big benefits we see are around OH&S and shearer safety," he said.

"The sheep are so much calmer, and we are also getting a quality job done.

Mr Feighan said they also planned to work with the University of Melbourne to ensure there were measurable benefits by putting sports performance sensors on shearers to track how far they move and their muscle fatigue.