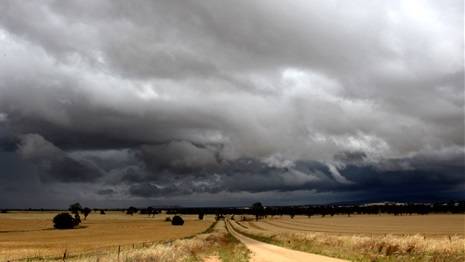 WET STATE: Parts of Victoria recorded its wettest ever September.

SEPTEMBER was wetter than average in most of eastern Victoria, with some parts in the wettest 10 per cent of September records.

In contrast, it was drier than average in the state's south-west.

Towards the end of month, a complex low pressure system and an associated low pressure trough that extended well into the tropics, brought widespread rainfall across Victoria.

The highest daily rainfall in Victoria this September was 123.2 mm, recorded at Lorne (Mount Cowley) on the 30th. Several sites had their wettest September day on record on the 30th, including Beulah West.

Daytime temperatures were warmer than average across much of Victoria.

Averaged across the state, mean maximum and minimum temperatures were 1.30°C and 0.60 °C above average, respectively. The complete September Climate Summary for Victoria is available on the Bureau of Meteorology's website.

Above median rainfall is likely for much of the country for the remainder of 2021.

For Victoria, there is a high chance ( 80pc) of above median rainfall for parts of the north, with the chance gradually reducing towards the south.

Days and nights are likely to be warmer than average for much of Victoria for October to December; no parts of the state are favoured to be cooler than average.

The wet and warm outlook is consistent with the state of our climate drivers.

The weak negative Indian Ocean Dipole (IOD) event is likely to persist through October. A negative IOD event increases the chances of above average spring rainfall for much of southern and eastern Australia.

Sea surface temperatures are warmer than average to the north and north-west of Australia and are also likely to be contributing to the wet outlook in the coming months. Additionally, the El Nino-Southern Oscillation (ENSO) in the Pacific is currently neutral, but there are signs La Nina could develop in spring. The cooling of the tropical Pacific towards La Nina levels is likely contributing to the wetter than median outlook.

Australia's temperature and rainfall variability is influenced by global warming and warmed by 1.44°C from 1910-2019.