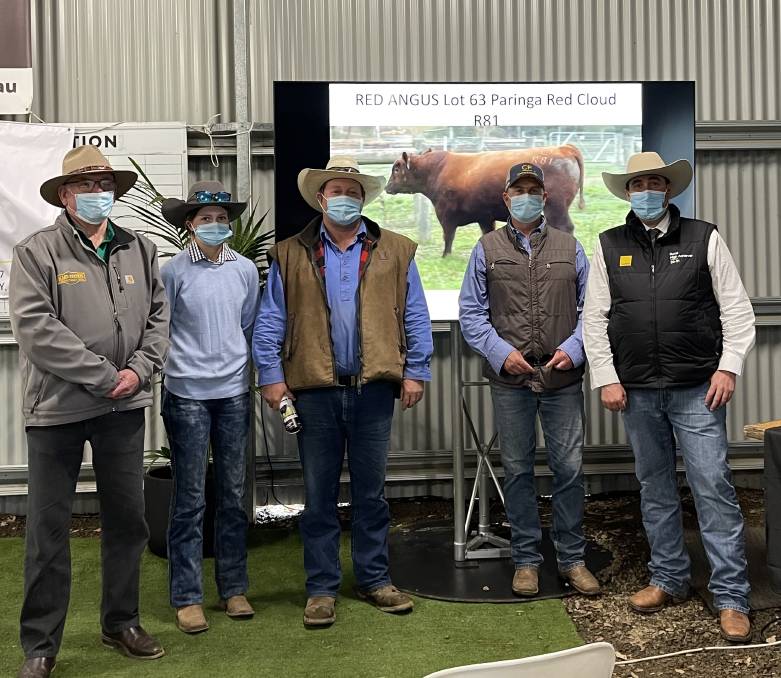 PARINGA stud, Yea, has doubled its top price on last year's sale, with a bull regarded as one of the best Red Angus sires going for $22,000.

Stud co-principal Tom Lawson said Red Cloud was out of a Te Mania cow he had bought some years ago.

"The sire was a black bull too, that came to our attention a few years ago," Mr Lawson said.

"They are high ranking genetically, and because there is a smaller Australian population of Red [Angus], we have to keep breed diversity."

He said Red Cloud excelled on all traits that drove profitable production.

"His traits observed on Australian Angus and global $Profit, rank him as the number one Red Angus animal, due to his multi-trait excellence and massive $18,817 $Profit index.

"Red Cloud is one of the only Red Angus bulls that competes with the elite black carcase sires globally, and his combination of elite calving ease and fertility makes him pretty unique."

He had an estimated breeding value carcase weight of +49, eye muscle area (EMA) of +9.2 square centimetres, rib fat of +0.8 millimetres and rump fat of +1.4mm.

The February 2020-drop bull had an intramuscular fat measurement of +3.6.

Stud co-principal Olivia Lawson said she was not overly surprised at the price.

"He is a unique animal; we had a lot of interest in him, probably for the last six months, since we used him in the autumn," Ms Lawson said.

"He was a little bit older as well, perhaps people look at cattle in a different way, when there are different age groups in together."

She said Red Cloud excelled in all the traits across the board.

"He is really high ranking and goes head to head with the black Angus, in terms of his data," she said.

The bull was in the top 3 per cent for calving ease, top 1pc for birthweight, top 2pc for days to calving, top 7pc for marbling and top 9pc for EMA.

"When you put a Red Angus up on a black Angus database, they have to do pretty well, because there is obviously a bigger gene pool," she said.

Ms Lawson said it was pleasing to see 90pc of buyers were repeat, long-term customers.

"That gives us great confidence our breeding program is pointed in the right direction," she said.

Karn Station manager Tim Stokes, Benalla, said he had been using Paringa genetics for many years.

"He is quite an outcross to what we have been buying from Tom," Mr Stokes said.

He said the station focused on carcase traits and was selling direct, with Coles being a significant customer.

"We have been running both black and Red Angus and crisscrossing through the Stabilizers," he said.