Glenlee Park Border Leicester stud is off to a cracking start with its inaugural ram sale hitting $9000 for registered stud rams. 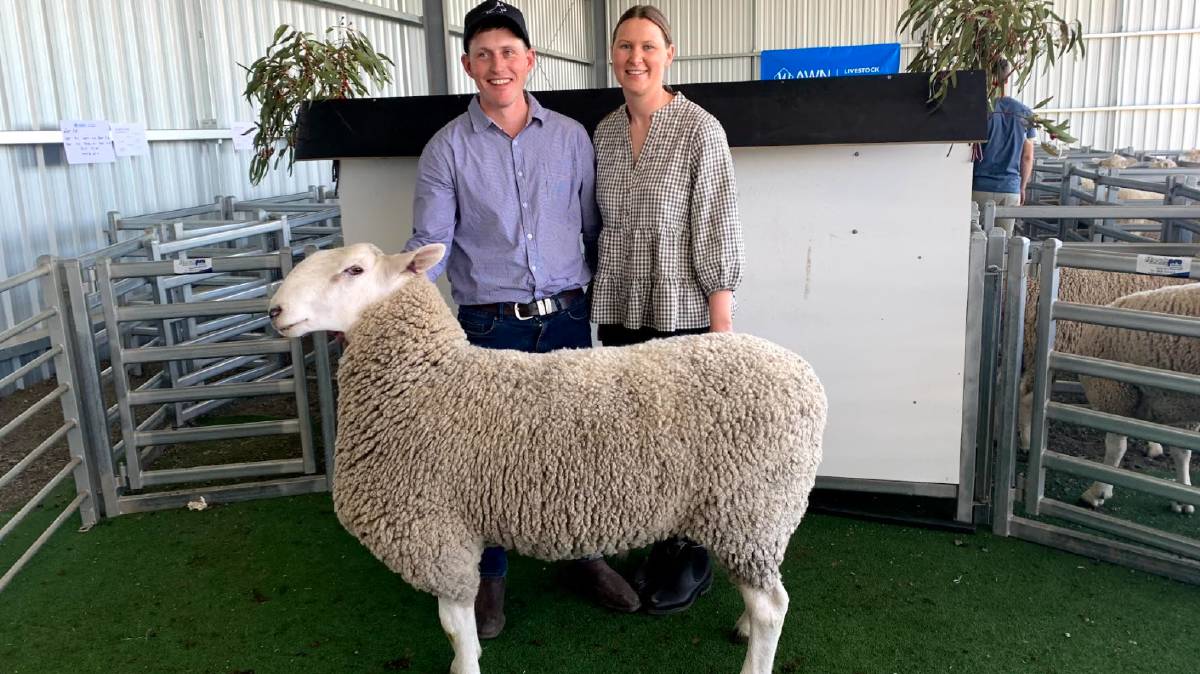 GLENLEE Park Border Leicester stud is off to a cracking start with its inaugural ram sale hitting $9000 for registered stud rams, and $3500 for flock rams, with an impressive total clearance of 74 rams.

It was a high-energy entrance on the stud auction calendar for the Dimboola-based stud, as the five selected stud rams sold to $9000, for an $5500 average, while the entire offering of flock rams sold to a high of $3500, and average of $2938.

The top price went to late entry, Lot 1A, Glenlee Park 60.20, an outstanding sheep which stud principal Will Schilling regarded as the "best ram we have ever bred".

"We thought long and hard about retaining this sheep," Mr Schilling said.

Torn by the ram's prospects as a potential show champion like his dam - Glenlee 1.15 was junior champion ewe at Hamilton Sheepvention in 2016 - he said the ram was sold under the condition of Glenlee retaining 100 doses of semen for in-flock use.

The second highest-priced ram, Lot 5, went to T.W. Mathews and P.G. and E.M. Mathews for $6500, and was described as "the most correct sheep in the catalogue, stands square and was thick as a brick".

Mr Schilling gave a special thanks to the major buyer at the sale, G & D Allen, Moama, NSW, who purchased 17 rams through AuctionsPlus, for an average of $2830.

"It was a mind blowing sale - it was strong right from the start and as we got through the sale, it got stronger and stronger," he said.

"I knew the meat and wool job was strong but I never anticipated the sale to be that strong."

Mr Schilling entered the show circuit "for shearing pocket money" when he was 12-years-old, under the mentoring of renowned Border Leicester breeders, Graeme and Isabella Grinter, Retallack, Ariah Park, NSW.

Together with his partner Billie Barber, Mr Schilling purchased a property 3.5 years ago to ramp up his stud breeding dreams.

A decision to hold an on-property sale just 12 months ago paid off, he said, revealing a competitive base of clients who support the "big, bold" Glenlee rams.

Breeding direction is heavily influenced by mother-stud, Retallack, after the Grinters offered 40 doses of semen from Retallack Exceed and Excel, whose son, Glenlee Park 28.17 sired all registered rams sold at the Glenlee sale.

"He has set me up and consistently breeds structurally-correct sheep," Mr Schilling said.

"It doesn't matter what sheep I put him over, he produces good progeny."

He dreams of breeding "the perfect Border Leicester".

"In terms of my breeding direction, you try and fix one problem and then you find another," he said.

"It's about busting yourself to breed that perfect sheep with nice crimpy wools and sound frame, that go on to breed for clients.

"I've taken some big risks financially in recent years and after yesterday, they well and truly paid off.

"For a young couple like Billie and I the sale has set us up big time.