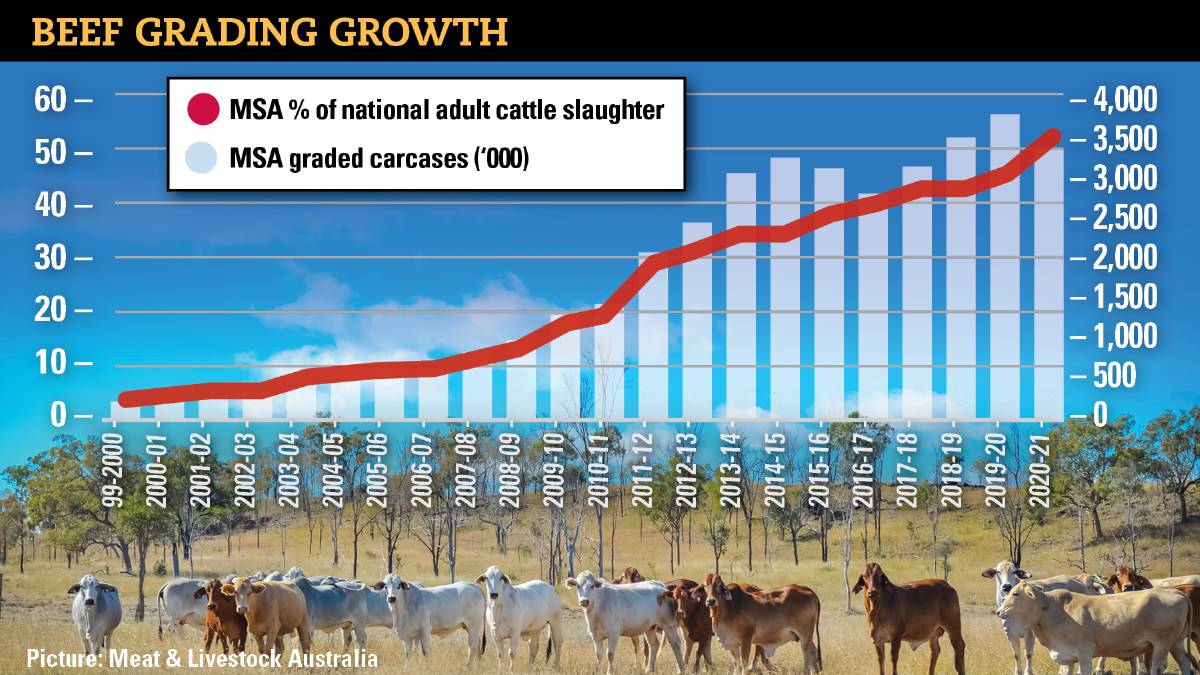 In 2020-21, 3.3 million beef carcases, or 53 per cent of the national adult cattle slaughter, were presented for MSA grading.

The Meat Standards Australia program has hit a major milestone, with more than half of the national adult cattle slaughter now MSA graded.

The Meat Standards Australia program has hit a major milestone, with more than half of the national adult cattle slaughter now MSA graded.

According to the 2020-21 MSA Annual Outcomes Report released on Monday, 3.3 million beef carcases, or 53 per cent of the national adult cattle slaughter, were presented for MSA grading through 38 beef processors during the financial year.

While the actual number of carcases was down by 11pc, it still represents an overall growth increase in the percentage of cattle going through the MSA program, due to the decrease in the national cattle population.

The number of MSA licensed brands also increased over the year, with the program reaching a new milestone of 205 beef and sheepmeat brands.

The use of the Eating Quality Graded cipher has also grown, with processors representing 53pc of MSA graded carcases using it.

"The report highlights the record-breaking participation across the supply chain of Australia's world-leading eating quality grading program, MSA, over the past 12 months," Dr Packer said.

"For MSA beef producers this has resulted in an estimated $157 million in additional farmgate returns in 2020-21, reinforcing the value that the MSA program delivers to industry."

By volume, Queensland processed the greatest number of MSA graded cattle with 1.6 million head, while New South Wales had the highest compliance to MSA minimum requirements at 96.8pc.

The total number of MSA registered producers across the nation also rose, up by 2594 producers to 48,241.

The refreshed myMSA platform is being given some of the credit for the increased adoption, with 3445 producers using the myMSA feedback system 22,407 times during 2020-21 - an increase of 38pc on the previous year.

Meanwhile, the first cuts-based sheepmeat model has also been developed, based on more than a decade of research. MLA is now working with industry towards commercialisation, which includes benchmarking and testing the system with a number of processors, and is partly dependent on technologies being developed to detect sheep intramuscular fat content.

"Once this model is commercialised, processors and brands will be able to apply sophisticated eating quality segregation within their supply chains to underpin branding, and offer incentives to encourage improved supplier performance," Dr Packer said.

In a sign that things will be able to move quickly once the MSA Mark II model is in place, of the total lambs processed in Australia over the last 12 months, 57pc were estimated to be processed through MSA-licensed processing plants.

Some 59pc of this went into 22 MSA trademarked brands.

By volume, Victoria processed the greatest number of lambs through MSA pathways at 1.3 million head.

There are now 26,475 MSA registered sheep producers in Australia.

Despite restrictions due to COVID-19, MSA facilitated more than 15 producer workshops and information sessions in 2020-21, with more than 700 beef and sheepmeat producers receiving MSA education.

Strong producer performance was evidenced through a national average MSA index of 57.62 and a record 95.5pc compliance to MSA minimum specifications.

The story MSA milestone: More than half of Australia's cattle slaughter graded in 2020-21 first appeared on Farm Online.