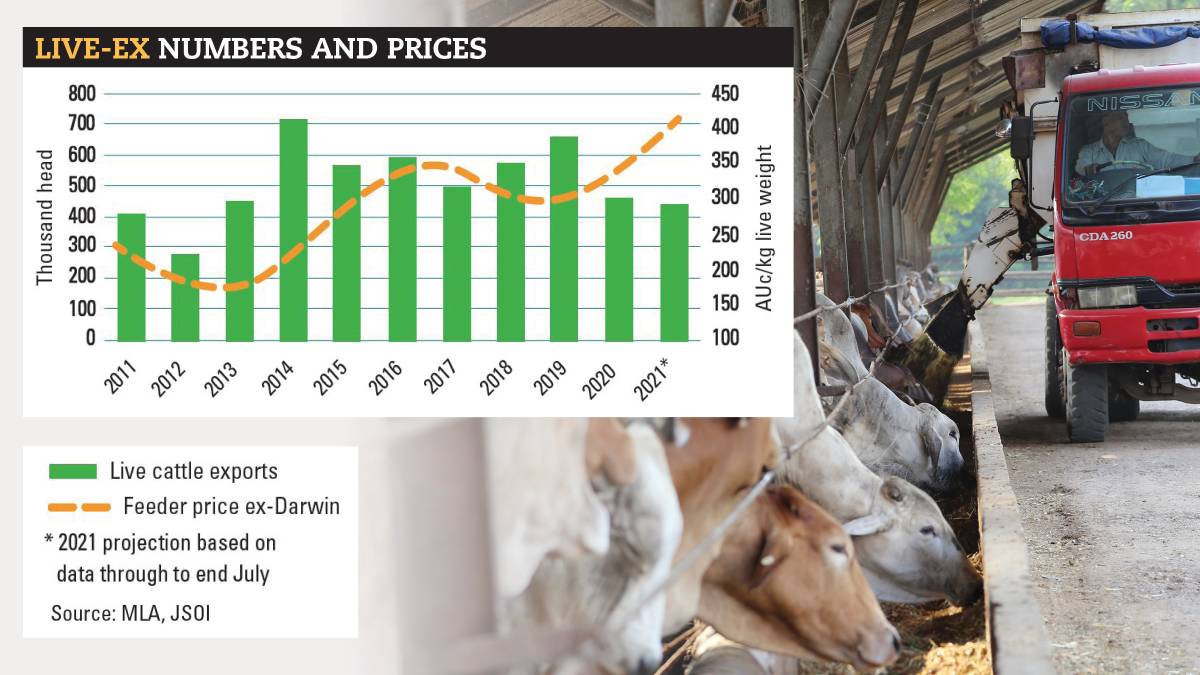 FEEDLOTS and abattoirs in Australia's primary live cattle market, Indonesia, are struggling to keep their head above water, slammed with a plethora of market dynamics that are testing their viability to a never-before-seen degree.

Tight cattle supply in Australia and the ensuing record high prices, along with rising feed grain prices and a pandemic-induced hit to beef demand, has squeezed profits to the point many are reporting operating losses.

The latest Australian Government figures show live cattle exports overall are sitting at just 579,500 for the calendar year to the end of August, down from 735,000 for the same period last year and 823, 000 by August in 2019.

To Indonesia, shipments are down 30 per cent year-on-year.

The sobering situation was spelt out in an update on bilateral trade between Australian and Indonesia in live cattle and beef products, released this month.

The joint state of the industry (JSOI) mid-year report released by the Indonesia-Australia Partnership on Food Security in the Red Meat and Cattle Sector said northern Australian feeder cattle prices exported from Darwin were consistently reaching 410 cents per kilogram live weight, a price at which Indonesian feedlots struggle to achieve a trading margin.

Most Indonesian feedlots were operating at 30pc capacity and experiencing financial stress but some had maintained 60pc capacity and modest levels of profitability through operational efficiencies and by astutely buying and selling stock, it reported.

Three feedlots mothballed operations in 2021 and a further four have permanently shut down. Indonesia's abattoirs have been similarly impacted.

Indonesian importers were considering other markets, including Brazil and the United States, to access lower-priced beef, according to the report.

Indonesia imported 23,840 tonnes of Australian fresh and frozen beef during the first half of 2021, down 15pc on the same period for 2020, while offal sales reached almost 20,000 tonnes for the period, down 6pc.

The report made mention of small quantities of frozen Brazilian beef being imported by an Indonesian state-owned enterprise, but said the retail price compared to the Australian product was not sufficiently attractive to local buyers.

Beef economist with the Australian Bureau of Agriculture Resource Economics Jonathan Wong said rumours of South American cattle being exported to Indonesia do not appear to have eventuated, possibly due to high transaction costs and low demand. However, there has been a shipment of live cattle from Brazil to Vietnam planned to arrive in late September 2021.

He said while logistical problems created by COVID-19 were still in play for the live trade industry, the sector had demonstrated a resilience and ability to adapt that had placed it in good stead.

Lockdowns had dampened volumes sent to markets such as Vietnam as well and Australia was respectful of the tough situation key markets were currently facing, he said.