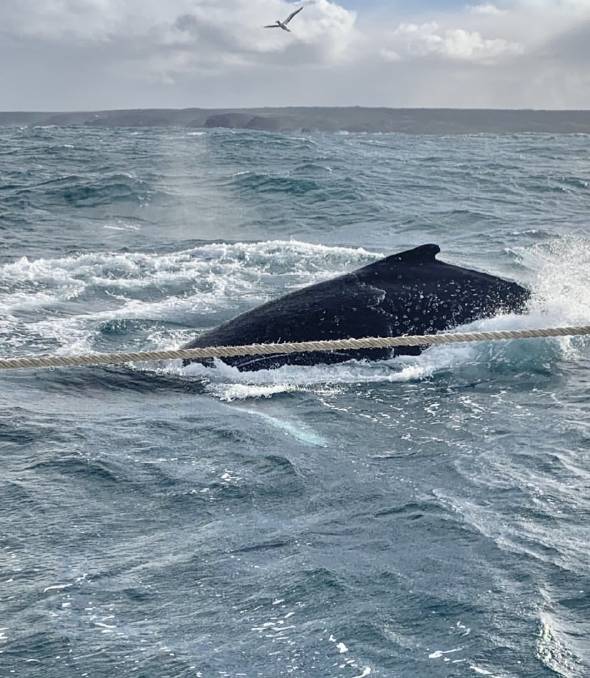 Whale sighting: Humpback whales sighted in the area off King Island, where seismic testing is happening has led to welfare concerns being raised.

"ConocoPhilips' environment plan, approved by NOPSEMA, assumed there was a low likelihood of humpback whales in the area during its seismic blasting survey," he said.

"Clearly, they got that wrong.

"There are whales in the area and it is worrying that it is King Island fishers reporting them, not the company or the regulator.

"With whales migrating through these waters, possibly with their calves, the last thing we want is to risk their welfare from harmful impacts of seismic blasting."

A NOPSEMA spokesperson said the environment plan has provisions for managing impacts on whales, including humpback whales.

"There are control measures in place to prevent unacceptable impact to whales such as a 2km low power zone and a 500m shutdown zone, adaptive management to account for a higher than expected whale observations (e.g. relocation of seismic vessel at distance from whales), and passive acoustic monitoring (PAM) to supplement visual observations with a 10km shutdown if a low frequency whale is detected by PAM within 10km of the seismic source," the spokesperson said.

"As such, NOPSEMA is satisfied that the in-force environment plan evaluated impacts to humpback whales and that there are appropriate controls in place to prevent unacceptable impacts.

"A revision to the environmental plan is not required."

If community members have concerns, NOPSEMA encourages them to contact the titleholder.

If they feel that they do not get a satisfactory response they can raise a concern via the NOPSEMA website.

The story Whale welfare worries raised after sightings off King Island first appeared on The Advocate.