Egg farmers have started donating pallets of local eggs to help those in need. 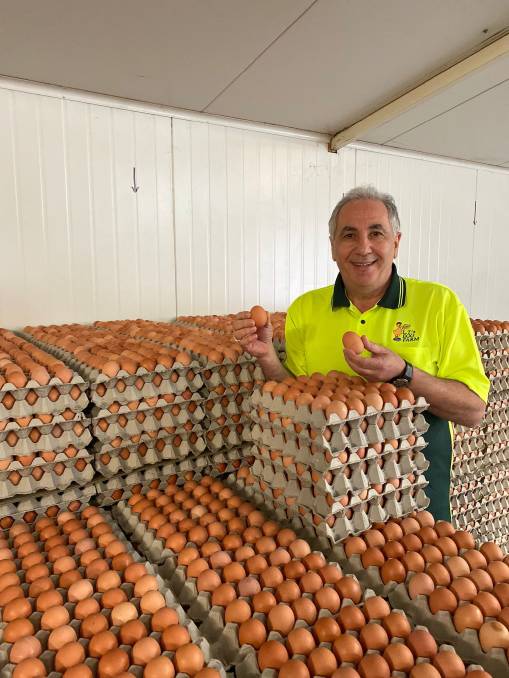 PROUD: VFF Eggs Group president Brian Ahmed said farmers would donate at least two pallets of eggs per week for the next 10 weeks.

Victorian egg farmers have started donating pallets of local eggs to help feed thousands of Victorians in need, as part of Foodbank Victoria's ongoing efforts to distribute emergency food relief associated with the impacts of the COVID-19 pandemic.

"Over the next 10 weeks, Victorian egg farmers will donate at least two pallets of eggs per week to help those struggling to put food on the table," he said.

"If you stacked them on top of each other, it's roughly enough to scale the height of Melbourne's Eureka Tower more than 30 times.

"The steady supply of eggs during this time will help ensure a guaranteed stream of produce to help meet the current demands and for the weeks and months ahead.

"As an industry we have an important role to play as a major provider of food and fibre to those struggling to put food on the table."

It tied in with the VFF's recently launched 'Farmy Army' initiative that helped coordinate a response for farmers and communities in their time of need, he said.

Foodbank Victoria chief executive Dave McNamara said the donations would be put to good use.

"This is yet another amazing show of support from the farming community," he said.

"A brilliant source of protein that can be incorporated into so many different dishes for those doing it tough.

"More importantly, it solves one of the age-old quandaries...clearly on this occasion, the EGGS are coming first!"

Any farmers looking to get involved in the 'Farmy Army' initiative are encouraged to check the VFF website.