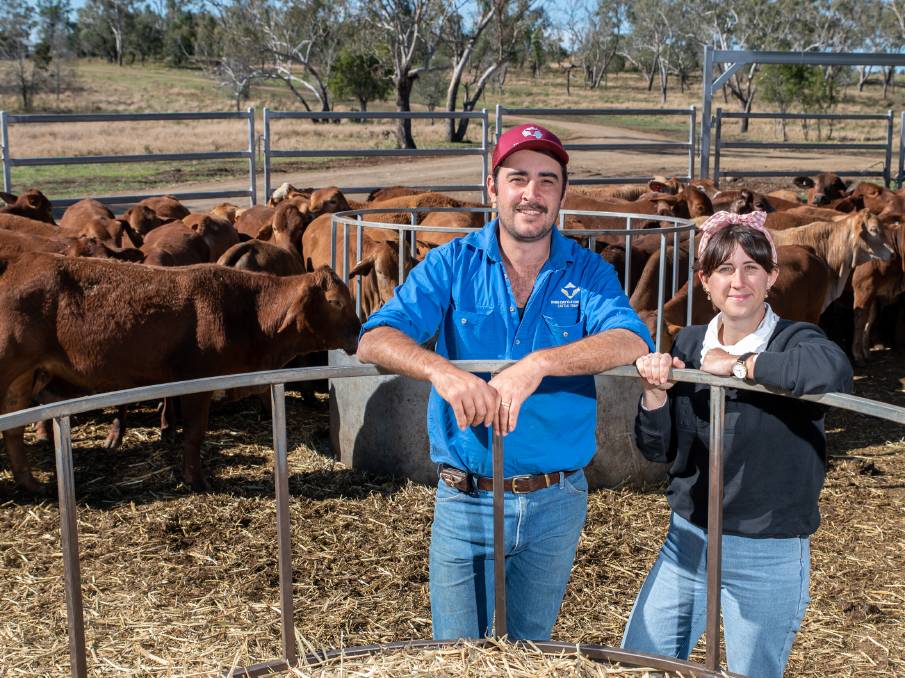 As the red hot cattle market continues to power on, cattle traders are watching prices closely.

As the red hot cattle market continues to power on, cattle traders like King Cattle Co at Kingsthorpe near Toowoomba are watching prices closely.

Owners Hayden and Megan King buy and sell hundreds of store cattle each week, but unlike some other cattlemen, they turn around their stock fast without fattening them, so their numbers need to be precise to make a profit.

Mr King said they averaged about 300 head at any one time, but because of the rising prices - especially steer prices - the makeup of their mob had shifted to about 90 per cent heifers and 10pc steers.

"We've been trying to source heifers under $1050 a head and steers under $1200 a head, which is getting challenging, especially on the steers side," Mr King said.

"In the last month they've really gone into another level and to a level I don't really want to get into either. It's mind boggling when you think you have to pay $1300 to $1400 for a 200kg steer."

Mr King said they were happy if they could make a $20 to $30 profit per head, because the quantity of stock made it viable.

"It's about having enough meat on the bone for the buyers to see value in them and enough for us to make it worthwhile doing."

King Cattle Co use agents to buy from about 10 cattle sales a week ranging from Gracemere in the north to Dalveen in the south.

They look for young calves aged four to twelve months and weighing 150-220 kilograms.

The calves are then transported to a holding location for four to eight days for tick treatment - usually Coolabunia near Kingaroy - before being moved to the King Cattle property.

There they are vaccinated, fed and turned off within a week or two to buyers predominantly in South West Queensland, northern NSW and the Darling Downs.

Most are purchased as backgrounders for feedlots, while some heifers are bought as breeders for restocking.

The traders focus on Brangus, Angus, Euro cross, Droughtmaster and Santa Gertrudis breeds because they are most popular with their clients.

Mr King said the price jump over the past 18 months had been significant for everyone in the cattle market.

"If prices do jump, you don't really want to be stuck with too many when it comes back, so I'm very cautious on what we buy - we need to know if we've got buyers behind us.

"With these younger, cheaper cattle - you're not paying $1600 to $1700 for them - you're only paying $1100, but at least if prices contract, you're going to get your money quicker with these than with the dearer ones.

Mr King said while their business was fast-paced, they still had a responsibility to provide quality hay, animal health and education.

"While the costs can be significant, we put a big emphasis on animal health, so anything that comes here we vaccinate for BRD (bovine respiratory disease) and everything gets a (tick) drench as well.

"We buy in quality forage sorghum and barley hay in round bales from the Downs and we try to educate them while they're here. Get the dogs in and draft them around."