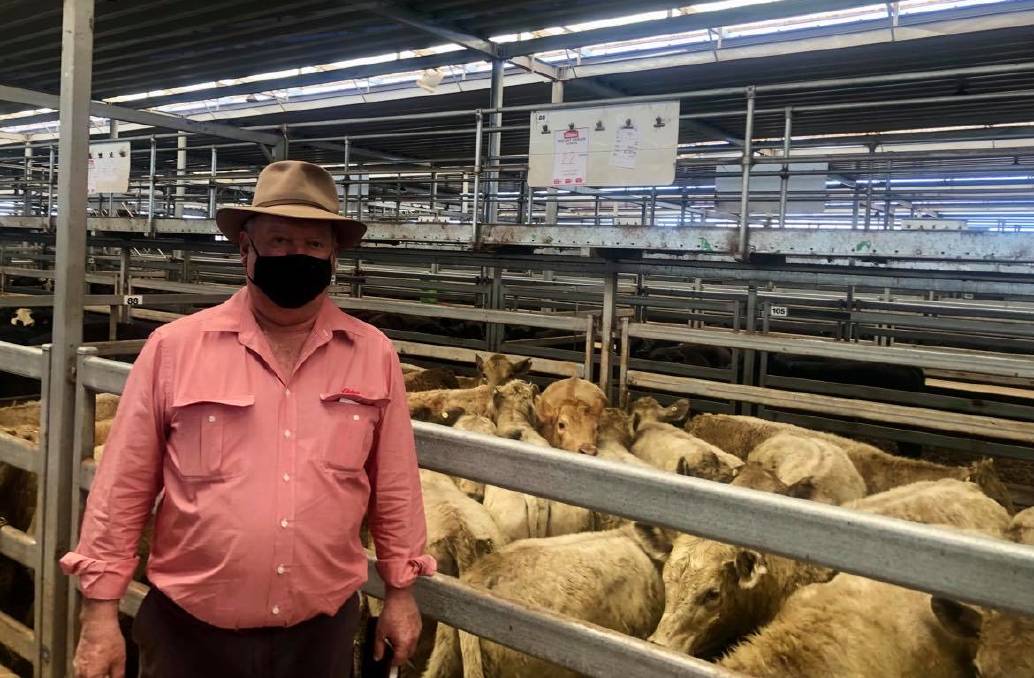 Elders agent Greg McNamara with a pen of 22 Charolais heifers, 369kg, from Mount Annan, Holbrook which sold for $2070. Photo: NVLX

Cows and calves top at $4120 for Angus cows with Charolais calves at foot.

The Wodonga store sale went from strength to strength again on Thursday, steers selling to a top price of $2530 and weaners returning more than 700c/kg in a yarding of close to 1400 head.

"Once you slipped under 340kg, your cents a kilogram rose well above 600c/kg."

Overall most steers sold from $1510 to $2400. A highlight of the draft was a run of 135 Angus and Angus cross steers from Brinstock Beef, Lucyvale, Vic.

The Upper Murray producers started their offering with three pens of 20 Angus steers, weighing from 375kg to 381kg, and sold for $2230 to return a top of 595c/kg. The three pens were bought by feedlot Teys, Charlton.

The top price of $2530 was paid for five Angus with Hicks Angus bloodlines, 496kg, offered by account MA Smith.

Mr Cousens said the heifer market was comparable to last month, with 350kg well-bred heifers trading for around $1950 to $1990.

Mount Annan, Holbrook, also sold Charolais heifers for a top price of $2070 for a pen of 22 weighing 369kg.

Cows and calves reached a top of $4120 for 11 Angus, second calvers with Charolais calves at foot, three to four months, from MF and M Ryan, Tocumwal. They sold to local restockers.

The few pregnancy-tested-in-calf heifers sold for a top of $2780 for eight Angus from DG and SL Cheshire.

Mr Cousens said there was good feedlot competition and local restockers were operating on the lighter articles.

The sale was conducted by Elders and Nutrien Wodonga/Albury agents.

The story Wodonga steers to $2530 first appeared on The Land.