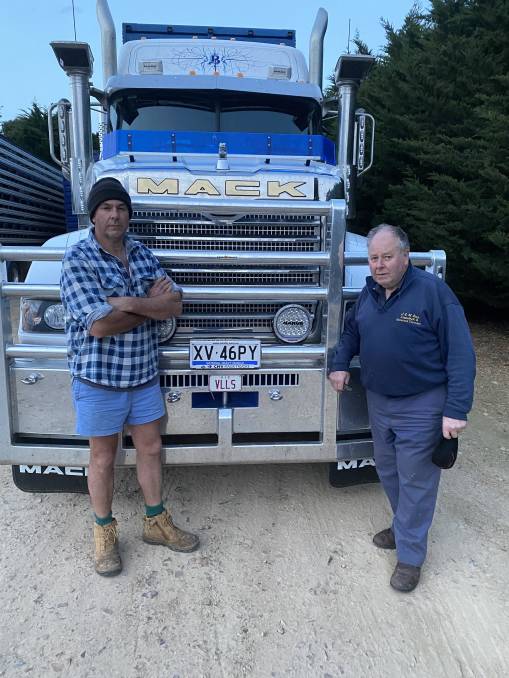 COVID REGULATIONS: Wayne and John Beer's livestock truck was stopped from entering South Australia, earlier this week, after authorities claimed its driver had not fulfilled the state's COVID-19 protocols.

A new COVID-19 testing site is to be set up Nhill from this afternoon, after new South Australian border restrictions saw Victorian truck drivers banned from entering the state.

Victorian livestock transporters say they were blocked from entering South Australia but hadn't been adequately informed about the change in testing rules.

"Some of these drivers have been assessed as not having a reasonable reason for not having such a test."

Now, West Wimmera Health Service has announced it will partner with Ballarat Health Services to set up a COVID-19 testing site at the Nhill trailer exchange.

West Wimmera chief executive Ritchie Dodds said the sudden rule change resutled in a bottleneck of trucks in Horsham, which currently has the two closest asymptomatic testing sites to the South Australian border.

"This should take some of the pressure off other testing sites and of course make life a little easier for the truck drivers," Mr Dodds said.

Fourteen Ballarat Health Services staff members will arrive initially, and it is expected the site will begin operating by 6:00pm Wednesday September 1, through until midnight.

From Thursday September 2 the testing site operating hours will be from 12:00pm (noon) to 12:00am (midnight) until further notice.

"There are a number of moving parts involved in setting up a site like this, but we successfully did something similar late last year and that experience has served us well," Mr Dodds said.

"We're very grateful for the support from Ballarat Health Services and of course the work of our own engineering and maintenance team."

The site is temporary; however, a more permanent solution will be considered if usage in coming days indicated one would be warranted.

Former Livestock and Rural Transporters Association of Victoria president John Beer, whose driver was stopped at Serviceton, on the SA-Victorian border, welcomed the news.

The driver was taking a load of pigs to Murray Bridge and was not allowed into SA.

"There is tonnes of room at the exchange."

Mr Beer said he had to hire a South Australian prime mover driver, who was up to date with the regulations, to take the pigs the rest of the way to Murray Bridge.

"They wouldn't even let our driver go anywhere into Bordertown to get tested and get up to date with what he was missing," Mr Beer said.

Truck owner Wayne Beer, John's son, said he received a phone call from his driver, around 3:30pm on Monday.

"He was pretty much terrified because he'd heard on the UHF, five minutes prior to that, they were turning trucks around at Serviceton if you hadn't had a COVID test 72 hours prior," Mr Beer junior said.

"The last information we had, on the Friday, was that once you were in SA you had 24-hours to get a COVID-test."

Mr Beer said he explained the situation to the police officer in charge.

Mr Beer said his driver could not get back to Horsham for testing, as the centre shut at 12:30pm.

"Bearing in mind we have 310 live pigs on board, you don't want to be going too much further away from Murray Bridge, because they were already off feed and water.

We could have had a massive catastrophe, with 310 dead pigs. - Wayne Beer, livestock transporter

"It highlights how vulnerable the industry is and that animal welfare is not taken into consideration.

"Put some testing stations on the border where they are required - it doesn't matter if you are travelling east, west, north or south.

South Australia police said they were working to ensure business continuity and the safety of the state.

"While further work continues to refine requirements they will as an interim measure be issuing drivers who have not received a COVID-19 test in the 72 hours prior to entering South Australia with a stand-alone direction to be tested within 12 hours of their entry.

A Victorian government spokesperson said it recognised the importance of supply chains,

"Throughout the pandemic, we have been effective in working to keep them moving right across the country," the spokesperson said.

"Freight has continued to enter and exit Victoria, throughout the pandemic."

The actions of SA Police were a matter for South Australia and freight activity was a national matter, under the the Freight Movement Code for the Domestic Border Controls - Freight Movement Protocol noted by National Cabinet on August 20, 2021.