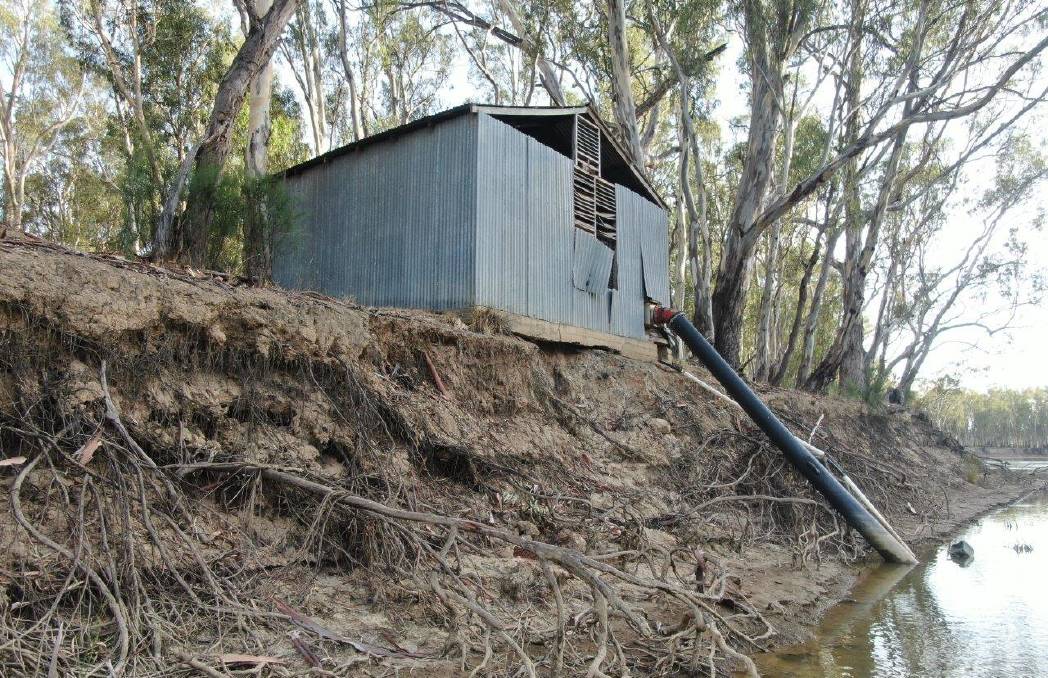 RIVER EROSION: The pump station, at risk of falling into the Murray River, due to bank erosion. Photo by Lloyd Polkinghorne.

A dairy and avocado farmer at Barham, NSW, says erosion is significantly affecting his property, which adjoins the Murray River.

Phil O'Neill says he'll have to move another one of his irrigation pumps back from the river, after the bank was undercut by high flows.

It's the second pump to be affected by erosion, with the first actually falling into the river.

"We got a couple of cranes, pulled the first one forward and relocated it," Mr O'Neill said.

"We have a pump now that is being undermined continually, so I guess there is no alternative but to move it.

"It's ridiculous what is happening."

He estimated the 12-inch pump would have been installed in the early 1950's.

Water advocate and Speak Up deputy chair Lloyd Polkinghorne said there had significant erosion in the area, in recent weeks.

"This river survived 100 years of regulation, and, now, it's that badly compromised in a 10-day period we lost 500 millimetres in a notch in the bank," Mr Polkinghorne said.

There had been a "massive geographical shift" in water used, under the Murray-Darling Basin plan.

"Water is getting used further down the system and there is also a massive change in how the water is being delivered."

"The flow that has done the damage is only 55 per cent of our historical capacity and that was for 10 days."

Water released from the Hume Dam had yet to reach the Barham-Koondrook area.

"Most of the water we have just had is the rain, below the storages, in the catchments on top of normal releases," he said.

"The river has dipped a bit and I waiting for the water they have released to come through.

"The risk now is what happens with a full river, full catchments and a wet outlook."

Water passing through the area now was comparable to what was being pushed down the river during the height of summer.

"The river bank is always changing, there is no doubt about that, but we seem to be getting a lot more trees and stuff falling in," he said.

"Its probably the last 10 years I have noticed it, and more particularly the last two or three."

"All the soil, when you are in a drought, is as dry as a chip.

"Normally when the river runs high it is in winter or spring when we have had rain, so there is moisture consolidating the bank

"Once it cuts through the hardened top layer, the soil jsut gets eaten away."

The problems come as federal Environment Minister Sussan Ley has announced a $3 million commitment to fully fund a feasibility study into ways to take pressure off the Barmah Choke.

Ms Ley said the study was in direct response to the very real concern being expressed by Murray river communities about environmental riverbank degradation through the mid-Murray's three key flow constriction points, the Tocumwal, Barmah and Edward Chokes. "

"The reality is variable water storage levels from a changing climate, mixed with a hotchpotch of state-based water delivery rules is putting more and more pressure on this part of the river, a situation exacerbated by a 20 per cent reduction in channel capacity," Ms Ley said.

"For the first time we are going to fully explore realistic options to optimise the capacity of Barmah Choke, to look at alternate delivery routes and hopefully start to address riverbank erosion that is clearly unsustainable.

"Importantly, the study will not alter current water trading rules which assist in maintaining water reliability and security upstream of the Choke."

The study has been commissioned at the request of the Murray-Darling Basin Ministerial Council, and it will include consultation with river users to understand their insight on viable options.

It is expected to be completed in late 2022.

Ms Ley said it would also provide advice to Basin governments on options to improve current water delivery capacity, as part of broader policy considerations for the Murray.