Crop, livestock diversity will be the feature of the latest Tasmanian irrigation scheme. 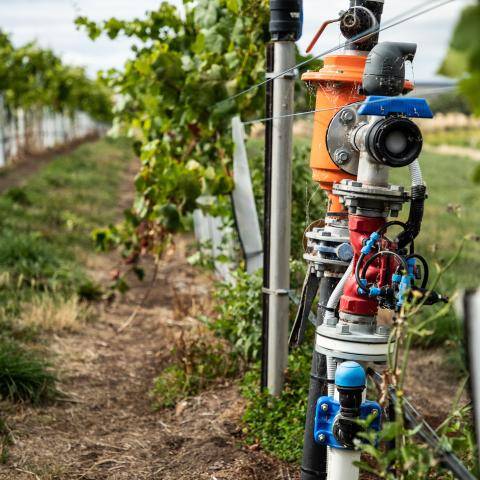 Tasmania's latest irrigation scheme, on the Tamar River, is expected to cover about 200 properties, producing a diverse range of crops and livestock.

Tasmanian Irrigation has called for expressions of interest in the scheme and held public meetings, to explain how it will work.

"It's really a unique scheme as there is such a variety of producers in this region, some broadacre grazing, right through to small, niche cottage type enterprises," Mr Archer said.

"That creates more challenges, trying to service everyone, but adding water to this area creates a lot of opportunities."

The proposed scheme is expected to deliver 12,000 megalitres of water to a large area both east and west of the Tamar River, north of Launceston.

Mr Archer said Landfall already used pivot irrigation on its main farm, north of Launceston, and wanted to expand that to its Greenhythe block, further up the Tamar.

Irrigation would be used to grow feed for youngstock, for the stud's seedstock business.

"We utilise irrigation to fill those feed gaps, through the summer months, when it is generally dry in this area," he said.

"There is just a lack of high-quality feed, during those periods, and irrigation gives us the best options for growing it."

Landfall made a conscious decision not to use grain in its system.

"We are trying to produce genetics that will perform in a grass fed system, so irrigation is the best option for us," he said.

Pooley Wines state sales manager Matt Pooley said he'd shared his experiences in dealing with three irrigation schemes, around the Coal River area, in the south of the state.

"We have three different schemes, all based on different strategies, and I spoke about how they have allowed us to grow and develop a sustainable operation," Mr Pooley said.

"One of the beauties of that Tamar region is that it has that diversity, which will certainly value add and bring the spotlight to that area."

Irrigation had given Pooley a consistency and certainty of water supply.

"In the past, the Coal River would flood during winter and be bone dry, during summer," Mr Pooley said.

"The cold climate area does experience peaks and troughs, but they won't be as extreme with the back-up from irrigation.

"We know we can now manage water more effectively, no matter what the weather, without the booms and busts in supply."

A regular water supply meant a more consistent control over quality, over a longer period.

"It keeps your wine on shelves and in restaurants - if you have a poor year, for whatever reason, it's a real struggle and fight to get back in front of the public."

"We are working quite hard on the engineering, to make sure it is affordable for everyone," Mr Marshall said.

"It's an opportunity to diversify and look to the future."