Irrigation equipment among the top items taken up under the Internet of Things trials. 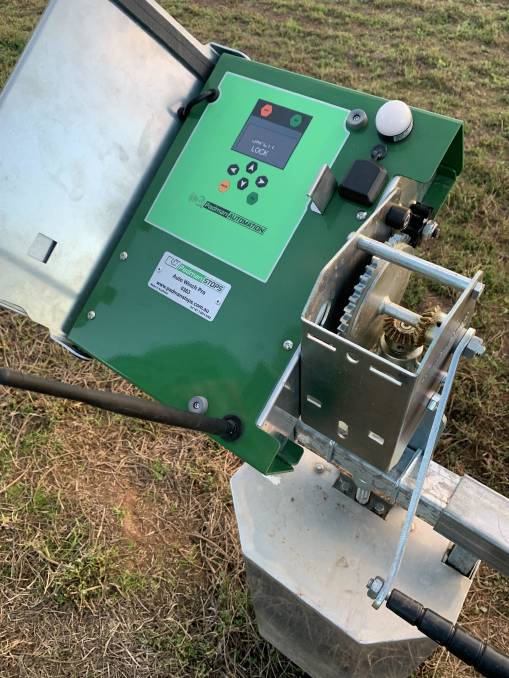 IOT IRRIGATION: Padman Stops auto winch on site in Bridgewater for use with a pipe and riser irrigation outlet.

Initial analysis of the take up of the Victorian government's Internet of Things grants program has found irrigation equipment was among the top four types of technology sought by farmers.

"Weather stations, soil moisture probes, Padman Stops irrigation equipment and home security systems would have taken up 85 per cent of the total spend in the trial," Mr Sloane said.

"A lot of the technology we found in the trial was for time saving or to provide peace of mind."

The IoT describes a system of devices (things) embedded with a sensor so they can measure and transmit data via the internet.

The AgVic On-Farm trial aimed to investigate the benefits of the technology.

In the irrigation sector, Mr Sloane said measuring water flow through a pipeline and pressure and water level monitoring were the most popular technological applications.

He said cost was seen as an initial barrier to investing in IoT technology.

"Initially, they were reluctant to touch anything that had a high monthly ongoing cost, but toward the end of the trial they could actually see the benefits (of the equipment)," Mr Sloane said.

'They could see for a business to keep operating, they needed to meet that cost."

He said participants also raised questions about who owned the data, that had been generated.

"Who else is seeing the data that's coming off their farm, and how comfortable are they with third parties accessing that data?," he said.

In the first place, data collected under the trial would be analysed by AgriBio.

But, in the first place, data collected under the trial would be analysed by AgriBio.

"I am not sure of the availability of that data, to outside organisations, but that may be a possibility, down the track," he said.

Mr Sloane said another sign reluctance to take up the technology had been overcome was shown by the follow-up Digitial Agriculture Investment Scheme, which offered further $30,000 grants.

It was fully subscribed in 11 days.

"We were kind of swamped," Mr Sloane said.

"By the time they closed on the Rural Finance website, we had up to 450 applicants."