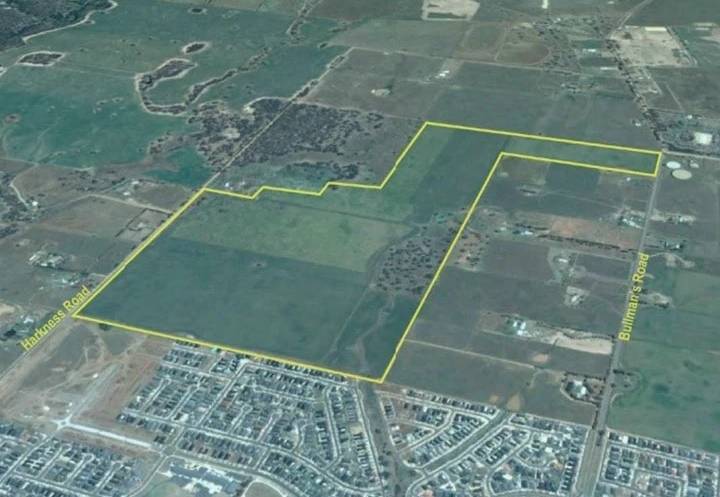 CITY SPRAWL: This parcel of farming land on about an hour from Melbourne's CBD has been earmarked for a new cemetery. Picture: Greater Metropolitan Cemeteries Trust.

It's not only the living looking to buyup farm land on the fringes of our cities, but the dead as well.

It's not only the living looking to occupy farm land on the fringes of our cities, but the dead as well.

Melbourne's cemeteries are fast filling up and a grazing paddock on the city's outskirts has been earmarked for a mega-cemetery.

The 128ha piece of leased farmland at Harkness (Melton West), about an hour from the city's centre to the west, borders already identified green wedge planning zones.

The parcel of land had been set aside by urban planners in the past ""to meet future community needs".

The decision comes as government planning authorities look to protect farmland within a 100km zone of the city under its Planning for Melbourne's Green Wedges and Agricultural Land.

The Victorian government is now receiving public feedback on its plans to protect farmland and plans to have an update out soon.

The government says "it is committed to protecting Melbourne's green wedges and keeping farms on our urban fringes working and producing for generations to come".

The Greater Metropolitan Cemeteries Trust said the country site was the largest cemetery development project in Victoria for 100 years and would serve Victoria's communities for another century.

The property has been used for farming for more than half of a century and is leased to two brothers.

The trust is now looking for a consortium to develop a long-term master plan for the site which is already zoned Public Use Zone 5 for Cemetery and Crematoria use.

The trust says it wants construction of stage one to begin in a year's time "with the intent that we would have burial space by the following January".

The story City sprawl swallows up more farmland - this time it's a cemetery first appeared on Farm Online.